With files from Linda Ambrose

Bernice Gerard, who left her mark on British Columbia in both Christian ministry and civic politics, passed away November 1, 2008, at age 84.

She was also the subject of a penetrating analysis, in 2014, by Canadian historian Linda Ambrose, who specializes in both feminism and Pentecostal studies at Laurentian University in Sudbury, Ontario. More about her assessment later in this essay.

Adopted as a baby by an aboriginal family, Gerard heard two women preaching the gospel in a country school house in rural Abbotsford when she was in her early teens.

In a 2000 BC Christian News interview, she noted that the women “told me there was one whose name was Jesus, who took little children up in his arms and blessed them. He was totally loving and kind.”

She gave her life to that Jesus. As she grew to adulthood, her commitment stuck.

Gerard became a teacher in the public school system, ending up in the interior mining town of Rossland. There, she met two Pentecostal evangelist sisters, Velma (later Chapman) and Jean McCall. They took the young woman under their wings. Velma was the pianist; Jean, the preacher;  and Bernice played a big fiddle, nicknamed ‘Junior.’

Eventually, when Jean McCall married and moved to the United States, Gerard took over the preaching duties. Chapman was the behind-the-scenes organizer.

They toured in both eastern and western Canada, using a big white tent dubbed the Cloud Cathedral. In the process, Gerard was ordained to the Pentecostal ministry. churches.

Many of the visits of the Gerard-Chapman Team to Canadian and American cities resulted in the planting – directly or indirectly – of some 200 new churches.

The tent work continued into the 70s, after which Gerard and Chapman settled in Vancouver, founding Fraserview Assembly (now Harvest City Church). They became involved in radio and television ministry.

For many years, the Fraserview church, which seated over 1,000, doubled as a TV studio for their nationally broadcast  Sunday Line program.

Her decision to run for city council, in 1977, was rooted in her pastoral activities and her chaplaincies at the University of British Columbia and Simon Fraser University. She is probably best remembered for her protests against nudity on Wreck Beach, something she believed would have a detrimental moral effect on students at nearby UBC.

Gerard was a many-faceted person, practical as well as devout. During her pastorate, she earned a master of arts in literature at University of British Columbia.

And she was a staunch supporter of the nation of Israel – leading tours to the Middle East, where she encouraged visitors to plant trees as a means to help in what she saw to be biblically-mandated reforestation.

During her years of social activism, she maintained a close association with famed British journalist Malcolm Muggeridge, who had turned from agnosticism to Christianity in his later years.

Gerard served on many Christian boards, among them Christian Info Society, publishers of BC Christian News. One CIS board member, Dolphe Hoffman, served as treasurer of Sunday Line, Gerard’s ministry.

Gerard was a major mover behind the development of Pacific Academy, a well-regarded, Pentecostal-based independent elementary and high school. PA, dominated by a red-brick clock tower and two auditoriums named for Pattison family members, is clearly visible from Highway 1 in Surrey, just east of the Port Mann Bridge.

“I would definitely describe Bernice as a networker. She wanted to help in anything that furthered the gospel,” said Hoffman, adding: “She was ethical and didn’t compromise. She worked with Bob Birch in the charismatic renewal, and it didn’t matter about denomination. She was strong in the Catholic charismatic movement.”

Entrepreneur Jim Pattison, who provided much of the startup funding for Pacific Academy, “admired her boldness and uprightness,” Hoffman added.

Gerard was involved in Christian-initiated cooperative housing in Richmond and downtown Vancouver. Shiloh Housing was eventually taken over by Broadway Church, her place of worship in later years.

When Parkinson’s Disease began to take its toll on her in 2000, she retired from Sunday Line. When she did appear in public, her gravelly voice was a little thinner; but the glint for Jesus still shone in her eyes.

Bob Burkinshaw, a church historian at Trinity Western University, recalls her as a leader among leaders. “When she walked in, she commanded the room,” he told BCCN.

Burkinshaw said that in working with Bob Birch to encourage the charismatic renewal, she helped bring to Vancouver such international leaders as Michael Green and David Watson, as well as Dennis Bennett, who advanced the movement on the American west coast.

Gerard topped the Vancouver Sun’s 2000 list of the 20th century’s most influential spiritual figures in B.C.

Linda Ambrose’s 2014 assessment ofof many of Gerard’s statements, sermons and writings leads with a reference to that list. She noted:

“In the year 2000 The Vancouver Sun named the Rev. Bernice Gerard number one on a list of the 25 most influential religious figures in British Columbia in the 20th century. Journalist Douglas Todd explained, “The veteran evangelist has made Greater Vancouver a stronghold of charismatic worship, spreading its super-emotional, arm-waving style to mainline Protestant, Anglican and Catholic congregations.[1]”

Dr. Ambrose noted that her own work:

“Explores Bernice Gerard’s reflections on the question of women in ministry and women’s status in the church. Her autobiography, Today and for Life, appeared three years after she concluded her pastoral ministry that had stretched from 1964 to 1985, when she co-pastored a Vancouver church, Fraserview Assembly [now Harvest City Church], with Velma Chapman, her life-long ministry partner.

“In her private correspondence just a few months before the book was published, Gerard described it as ‘a[n] intellectual – spiritual – pilgrimage kind of book: … my story of new life in Jesus, and my Pentecostal experience, life as a university chaplain, women’s ministry, a biblical rationale for Christians in politics, and some of my experiences as a member of Vancouver City Council, etc.’[2]

With respect to Gerard’s position on women in Christian ministry, Ambrose noted:

“I set out to interrogate Gerard’s ‘intellectual pilgrimage’ and in particular, her position on the contentious issue of women in ministry. Questions about women’s place in the church were being widely debated by North American evangelicals throughout the 1970s and 1980s and the issue of women’s ordination was at the centre of the deliberations of her own denomination, the Pentecostal Assemblies of Canada, in that period.”

“ …and her feminism was shaped by a surprising combination of influences and ideas she encountered, adopted and adapted from a surprisingly broad spectrum of scholarship. Indeed, Gerard encouraged readers of her life story who were curious to know more about what had shaped her thinking, to check the footnotes of her book.[3]” 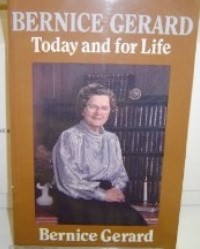 “A careful reading of [Gerard’s] autobiography and her personal papers held in the archives of the Hudson Memorial Library at Summit Pacific College in Abbotsford demonstrates that Gerard’s thinking about women’s roles was influenced by at least three different expressions of feminism in the 1970s and 1980s:

Portrayals of Gerard in the media and in Pentecostal church circles as a popular (and often controversial) preacher, broadcaster and municipal politician, Ambrose suggests, have tended to overshadow the fact that she was an academically inclined woman who read widely, enjoyed academic exchanges and thought carefully about how she could arrive at a synthesis between her faith and her feminism.

“The fact is that she managed this so skillfully, almost subversively, that many of her former listeners, readers and parishioners might balk at the very idea of the label ‘feminist’ even being applied to her. Certainly her instruction to simply check the footnotes in her book belies the complexity of ideological influences that converged as she adopted and adapted ideas from various sources to arrive at her conclusions about the role of women in the church.”

Lloyd Mackey has close to half a century of experience in community, faith-based and leadership journalism, including 15 years working out of the Canadian Parliamentary Press Gallery in Ottawa. Books he has authored include These Evangelical Churches of Ours (Wood Lake Books, 1994), Like Father, Like Son: Ernest Manning and Preston Manning (ECW, 1997) More Faithful than We Think: Stories and Insights on Canadian Leaders Doing Politics Christianly (BayRidge Books, 2005) and The Pilgrimage of Stephen Harper/Stephen Harper: The Case for Collaborative Governance (ECW, 2005/2006). He is founding editor/director of the Online Encyclopedia of Canadian Christian Leaders, an outgrowth of his Doctor of Ministry (DMin) studies, completed in 2015 through Tyndale University College and Seminary. In 1984, he earned a Master’s in Business Administration (MBA) at Simon Fraser University. He and his wife, Edna, are trying to practice “active retirement” and an examination of “social architecture” in the emerging Central City urban core in Surrey, BC.

Dr. Linda Ambrose is a historian at Laurentian University in Sudbury, ON. Her work in the areas of Pentecostalism and feminism are cited as follows: Ambrose, Linda M. “Canadian Pentecostal Women in Ministry: The Case of Bernice Gerard and Feminist Ideologies” in Margaret English de Alminana and Lois Olena, eds. Women in Pentecostal and Charismatic Ministry: Informing a Dialogue on Gender, Church, and Ministry. (Leiden,

NL: Brill, 2016): 229-246. She has been teaching Canadian History at Laurentian since 1994. Her areas of expertise include women's history, gender history and family history. She is an active researcher with publications on rural women's organizations, (specifically the Women's Institute movement), biography (A Great Rural Sisterhood: Madge Robertson Watt and the ACWW is her latest book with U of T Press, 2015), and Canadian Pentecostalism (her current project).She belongs to several professional associations including the Canadian Historical Association (CHA), the Ontario Women's History Network (OWHN), the Canadian Committee on Women's History (CCWH), the Rural Women's Studies Association (RWSA), the Agricultural History Society (AHS), the Society for Pentecostal Studies (SPS), and the European Research Network on Global Pentecostalism (GloPent). She holds an MA and a PhD, both from the University of Waterloo.

Margaret Proctor Burwash had a keen interest in the welfare of female students at the University of Toronto’s Victoria College, and believed that their education should be largely in the hands of women.

A Home of Charity

Shaye Falle has been influenced by the posture of generosity with which her grandfather has lived his life, and seeks to live the same way.

What's in a name? Gerry Turcotte reflects on Our Creator giving appropriate names to both things and people, and how sometimes the circumstances we find ourselves in, reflect the names we've been given.