At the end of January, my wife Debbie, my mother in-law Betty and I were invited to celebrate the arrival of our first Project Abraham Yazidi sponsored family at the home of Hayder Essw in Richmond Hill, Ontario.

His cousins, the Mado family, had arrived from Turkey last Wednesday evening to be reunited with existing family already in Canada.

Saadi Mado, his brother, and his sister, had not seen their parents, two brothers, their sister in-law with her children in over two years. 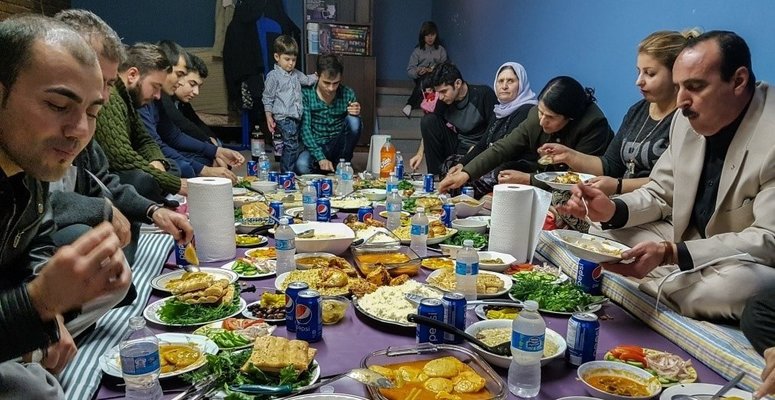 With the help of Project Abraham, Canadian and Jewish Friends of the Yazidi, and the Yazidi Human Rights Organization – International, in conjunction with the Office of the Archdiocese of Toronto (ORAT), they are now reunited. More importantly they are safe from the fear they had been living in, without food, adequate heat, medical care, and protection from harm. By comparison they are now truly living in a land of milk and honey.

True to Yazidi hospitality, Hayder’s house was an open door to friends, family, and the Yazidi community. We were welcomed with hugs and kisses to a house filled with children, men, and women, joyfully celebrating. They could not have thanked us enough, or made us more welcome. They served us tea in little glass cups, offering us nuts and fruit, and filled us with the stories that led them to Canada.

The Yazidi are a small ethnic and religious community and indigenous to northern Mesopotamia or Iraq, especially a community around Mount Sinjar. They have been singled out by ISIS and, since 2014, thousands have been murdered and the young women sold into sexual slavery. Relief workers in the evacuation operations described the conditions on Mount Sinjar as "a genocide," having witnessed thousands of corpses.

Hayder's son, Azad, told us about the gas station their cousins owned, and how an Al-Qaeda suicide bomber blew it up. The two cousins, badly burned, were sent to a hospital where another cousin, a medical doctor, looked after them, not recognizing that he was attending to his own family members. They died a few days later.

Hayder told us about going to school in Iraq and being taught by his Muslim teachers how evil Jews were.  His family learned, without even knowing a single Jew, to fear us. And now he knows that Jews are not his enemy; they are among the very people who helped him and his family get to Canada. He now knows the lies he was taught, the propaganda, the ideology of hate, and now knows that has nothing to do with reality.  He and his family now embrace the Jewish people, and all the people of Canada.

The truth really does set you free. 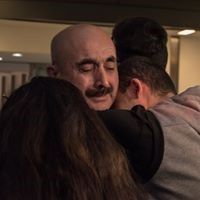 As if this was not enough, we were then ushered down into Hayder’s basement where a feast was set out in Yazidi fashion. Plates of rice, bread, pickled vegetables, meat, and bowls of soup were laid out on the floor. We ate crossed-legged as the children played, everyone taking pictures on their cell phones, passing food, smiling, laughing, and being thankful that the terror they were in has ended for them.

The upcoming year will be a challenging one for the arriving family, the organization says, as they begin to learn English and adapt to their new country.

Through his son’s translation, Jasim expressed gratitude being on Canadian soil.

“We are really happy to be joined by our kids again and be safe,” he said.

Mado said he was overcome by emotion.

Looking back on a trip to Bethlehem that evoked peace and solace, Mirjana Villeneuve seeks to walk alongside the Holy Family approaching the manger this Christmas.

Clamour and division surround us, yet as Advent bends into Christmas, Rebecca Darwent writes, the presence of God with us reminds that He is constant.