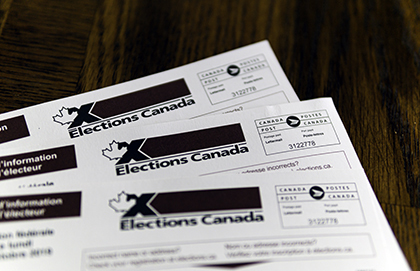 Election day is at hand. An election is a serious business, and serious matters are in the balance. But does an election campaign have to be so lacking in humour?

There is much lamenting the partisan polarization of debate, the superficiality of media coverage, the focus on persons rather than ideas. But more than that, it is all so crushingly grave, even grim. Jokes are rarely made; or at least not funny ones, as humour requires a bit of the unexpected, and the unexpected is the one thing that is never to be permitted from tightly controlled campaigns.

The Justin Trudeau blackface/hands/elbows/knees-and-toes spawned a thousand and one jokes across the land, some of them gut-bustingly hilarious. Nary a hint of humour though was permitted into the actual campaign. That’s not new. Back in 1984, Brian Mulroney was cracking wise on his campaign plane about John Turner’s fin-de-regime patronage appointments, noting that, in regard to Bryce Mackasey, despatched to Lisbon as the Canadian ambassador, “there’s no whore like an old whore.” The press pounced, and Mulroney summoned up the faux contrition – he was far more like Trudeau fils than Trudeau père in that regard – and offered sombre repentance that he had even joked about such things. But John Turner had done it, which is even worse than joking about it! Thirty-five years on, it seems that joking about whatever it is may be just as bad, even worse, than doing it.

So as my fellow Canadians puzzle these days over which party to vote for – I have no such burden, having already voted – let me point out that the Rhinoceros Party is still around, perhaps not kicking but alive again. It may not merit a vote, but it does merit consideration, if only to prove that laughter has not entirely been entirely excised from Canadian politics.

How’s that, our younger readers ask? The Rhinoceros Party? Is that the latest save-the-planet activism from the Jenner-Kardashians, deploying the fearsome power of reality TV celebrity against criminal poachers sawing off rhino horns to fashion elixirs and potent aphrodisiacs for NBA executives to present as atonement offerings to the delicate tyrants in the Chinese politburo?

No, dear Millennial, no. The Rhinoceros Party was founded in 1963 as an official party for Canadian federal elections. It ran candidates. It never won a seat. But it took positions that offered a satirical send-up of the prevailing wisdom.

The Sir John A. Macdonald of the Rhinoceros Party was, at least in spirit, Cacareco, a Brazilian rhino elected to the Sao Paolo municipal council in 1958. The rhinoceros was a fitting symbol for a “political party since politicians, by nature, are thick-skinned, slow-moving, dim-witted, can move fast as hell when in danger, and have large, hairy horns growing out of the middle of their faces.”

Back in the 1980s, when national unity and the constitution hung like a millstone around the national neck, I seem to recall that the Rhinos had the official policy of bulldozing the Rocky Mountains in order to fill in the Great Lakes, thus making the country more equal. I went to research that but could only find a reference to the Rocky Mountains being bulldozed, not for national unity but to permit Albertans to watch the sunset.

In 2019, the Rhinos are proposing, national unity wise, to make the country more equal by re-drawing provincial boundaries so that all provinces are rectangles, like Saskatchewan.

I think, strictly speaking, Saskatchewan is a trapezoid, not a rectangle, but that’s the kind of pedantry that sucks the joy out of political life.  On the other hand, if the Rhinos really want a bold policy, they might embrace the rhombus. Some people might think that it makes you look square, but it really doesn’t.

“As we’re voting for clowns, choose the funniest!” is the Rhino slogan for 2019. The party “offers an almost credible alternative to voters disillusioned by traditional parties.”

“Voting for real politicians does not get you anywhere? Change your strategy: vote for a fake one!”

Sometimes it is hard to tell the fake from the real. In the Beauce riding, where Maxime Bernier is running for the Maxime Bernier People’s Party of Canada, the Rhinos are running their own candidate, Maxime Bernier. It might create some confusion to have two candidates with the same name in the same riding. At least the Rhinos hope so.

They tried that back in 1984, when they ran John Turner in Vancouver Quadra against John Turner. Not for long! The prime minister of Canada then ran as John N. Turner, the N standing for Not-the-other-John-Turner, or perhaps it was Napier, which is his middle name.

This time out the Rhinos realize that the national unity debates of the 1980s and 1990s are in the past. It’s the climate now, and the Rhinos have their own green plan. There will be mandatory green cars, though there will still be some choice of shade: forest, pale, khaki and neon.

In order to cool the planet, a Rhino government will force all citizens to leave their windows open in the summer and to operate the air conditioning to the maximum. That is a, er, hot issue in my riding of Kingston and the Islands, where the local city council is going in the opposite direction, proposing to ban open doors on stores when the air conditioning is on. Who says there is no meaningful choice in this election?

Kingston might be, again, a battleground riding for the Rhinos. Who can forget the pitched battle when the Rhinos’ Ted “not too” Sharp ran a bitter personal campaign against long-time MP, and Canada’s first female foreign minister, Flora MacDonald? He stood up for the overlooked and ignored under the slogan, “Fauna, not flora.”

The 2019 Rhino platform is remarkably up to date. Seeing the excitement that the Raptor’s NBA championship brought from one end of the country to the other, it is proposed that Canada annex Massachusetts, securing more frequent sports championships. The Rhinos have no policy on the Maple Leafs. Some things are too painful to laugh about.

“To increase the safety of Canadian children, newborns’ first names must be at least 12 letters, including a capital letter, a number, and a special character.”