In mere weeks, the COVID-19 pandemic has gone from media fixation to global obsession as countries around the world struggle to control infections and ward off death. Few are the media reports, or indeed the personal conversations, that don’t at least touch on it. In the middle of it, we find it eerily difficult to remember when we talked of other things. And we already share the conviction it’s something we’ll never forget living through.

Yet part of the paradox of being human is how rapidly yesterday’s looming apocalypse slips from unavoidable immediacy to history to the abandoned burial ground of who-knew? The evidence on this snowy St. Patrick’s Day in Montreal lies mere kilometres from where I write this in the form of about 6,000 Irish bodies dumped into a mass grave in the mid-19th century.

Forget being forgotten. Their existence was actively denied for decades, even though they had died in the typhus fever sheds of the city’s Griffintown neighbourhood when they arrived here fleeing the Irish famine in 1847. It’s a common occurrence to speak with lifelong Montrealers who have no idea so many dead lie round in an obscure spot on the north side of the St. Lawrence.

It’s not just garden variety ignorance of local history. Controversy erupted late last year, and continues to bubble, over Mayor Valérie Plante’s intention to name a new Montreal commuter rail station for former premier Bernard Landry, utterly disregarding the Irish community’s request that it honour the place where starving and impoverished sons and daughters of Éire were killed by a horrible plague.

Spirited as the debate has been, it’s also fortuitously timely given how the novel coronavirus has hypersensitized us to the destructive path diseases can carve through whole societies. It also comes as an University of Toronto historian is concluding a lengthy study not just into the social response to the sick and dying but also into the effects on families, and especially orphaned children left behind.

The U of T’s Mark McGowan is the academic driver behind an innovative undergraduate credit course to track the identities and lives of those orphans rescued during the Great Famine – An Gorta Mor. In the spring and summer 173 years ago, an estimated 70,000 Irish refugees overwhelmed Montreal, which at the time had a population of about 50,000.

In early November 2019, archeologists began sifting through human remains in a mass grave where their bodies were dumped 172 years ago, and essentially forgotten for decades despite long efforts by Montreal’s Irish population to memorialize them. The find fueled controversy when Mayor Valerie Plante announced that a planned light rail commuter station in the heart of Griffintown would be named for the late Bernard Landry, a former sovereigntist premier of Quebec. Irish community leaders have denounced it as yet more insensitive neglect of their history and contribution to Montreal.

On the last Sunday in May each year, the Ancient Order of Hibernians organizes the Walk to the Stone – a procession from St. Gabriel’s Church in Point St. Charles to the massive Black Rock that commemorates the site of the mass grave into which bodies of Famine victims were dumped. Two years ago, Mayor Plante and the Lord Mayor of Dublin, Michaeál Mac Donncha were among those who made the trek.

The starting point at St. Gabriel’s underscores a key aspect of McGowan’s research: the role of both Catholic and Anglican churches in attending to the dying refugees, but also in placing their orphaned children with families who cared for them and, in many cases, enmeshed their lives and histories into the fabric of Quebec society. Both of those crucial contributions of the 19th century Church have been curiously understudied by historians inside and outside the province, McGowan says. It’s a powerful story, he adds, one that he’s in discussions with McGill-Queen’s University Press to turn into a book.

During a guest lecture to the School of Irish Studies at Concordia University last fall and in a follow-up interview, McGowan stressed the awareness of the clergy and religious from orders such as the Grey Nuns and the Sisters of Providence in caring for those stricken with typhus during the “Summer of Sorrow,” and the fullness of their understanding of it as a call from God. 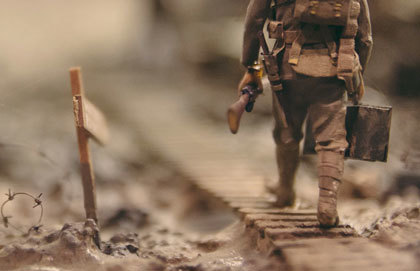 From Failing Hands We Throw
A Proclamation Reclaimed
Unmarried With Children

“Those on the front lines saw the immediate need to help regardless of religious affiliation. For Catholics, knowing many of these refugees would be Catholics was sort of helping their own, but it seemed to be encoded into the religious DNA of the time that you served, and you served by putting your life on the line.

“They knew that with typhus raging in the sheds at Point St. Charles, it could be a death sentence going to work there. But they did it for love of God, and love of neighbour. That’s why they took their vows. They were vows to serve. Bishop Bourget said to each of his priests: ‘You have to do service there.’”

Service did not end when the epidemic abated. McGowan and his team of eager, talented U of T undergraduates traced, over five years, about 1700 orphans who would have been left alone, bewildered, in many cases unable to speak either French or English when their parents died on the Coffin Ships, the rocks of Grosse Isle in the St. Lawrence, or in the fever sheds of 1847 Montreal. Most of those children were brought into the front-line care of the Church – Catholic and primarily Anglican – before being placed with families. Why? Because there was essentially no one else.

“The State didn’t have the kind of safety net apparatus as it does now. It scrambled as best it could to solve the crisis but couldn’t have done it without the help of the churches, which were the largest and most influential institutions within colonial society.”

Contrary to the sepia-inflected Heritage Minute aired in the run-up to Quebec’s 1995 sovereignty referendum, the integration of the orphans was not all bienvenue mes chers enfants, cozy duvets under slanting roofs, and happy family life. Work done by McGowan and undergraduate sleuths poring through census documents, church records, and official registries of all kinds showed few of the Irish children were formally adopted by French-Canadian families. Many were raised in a kind of indentured labour for farms and businesses. Some, when they came of age, simply disappeared to points west or south.

In fairness, he says, that reflects the attitudes and structures of a society in which there were no real mechanisms for adoption, all children were considered little adults obliged to work for their keep, and record-keeping outside of the Church seemed almost designed to challenge future academic detectives. It was certainly a test for his undergraduate team, who would spend painstaking hours tracking leads on long-ago orphans through the archival maze only to have it turn out a dead end.

“I got a true understanding of what historical and archival research really is and how challenging it can be, because even if you do find a match in a name, the years might not add up or the number of children (in a family) might not add up, so you’d find all your work discounted,” says Pamela Smofsky, a Montrealer who undertook the research as part of her studies at U of T in 2016 and ended up presenting findings at a conference in Ireland.

Michaela Vukas, who worked on the project in 2017 and discovered her own Irish roots as a result, says one of the stumbling blocks to tracing the orphans’ integration was the way names could change on official documents over the course of a lifetime. Frustrating at that could be to the research effort, it also re-affirmed the humanity of those being traced.

“We wanted to see what their lives became, to flesh them out as full human beings, not just as statistics in a census data or register. One of the best ways to do that was to find the records of the adoptive family, but a lot of times their names would change or the spelling would change. If the transcriptions were done cross-lingually the names would become kind of French,” Vaupas says.

An orphan who started life as “Courtenay,” for example, appears to have ended life as “Georges”– or at least married under that name. Following changes of name revealed changes within a life itself, Vukas says, stressing that the detailed record-keeping of the church was vital to uncovering this highly personal dimension of Canadian and Quebec history.

In fact, McGowan points out, it was the changing of one orphan’s name to “Tye” from “Tighe” that led descendants to contact him from Ireland and ask him to research the family’s oral history. In essence, that’s where the Quebec orphan project began, and where it came full circle when he and students presented their findings at the original farm in Strokestown, Co. Roscommon.

“That’s why we started with that estate, and why the study grew,” McGowan says.

In the naming of names is the recovery of history, the resurrection of the past and its vital link to present and future. Which is where one link in a new commuter rail line for Montreal comes full circle, too. What if that station stop weren’t named just to celebrate either the Irish community or a venerated Quebecois politician, but rather a year in the city’s life when service for all was considered a calling from God? When a city of 50,000 took in and comforted the ragged, the starving, the dying. When it embraced them even at the risk of death?

La Famine? An Gorta Mor? Better minds than mine can do the creative toponymy. But wouldn’t that be a way to honour the humanity of those who arrive, and those who depart, through that station every hour of every day?

If it were to happen in this, the year of COVID-19, when we have all been brought almost literally face to face with the novel corona virus pandemic, wouldn’t it be a suitable way to keep our experience from disappearing under our human habit of forgetfulness, too?

In an interview with Irish politician Rose Conway-Walsh, Convivium Publisher Peter Stockland gleans from the 1916 Easter Rising universal lessons for renewing the architecture of pluralist society.