In yesterday's New York Times Magazine was a fascinating piece on our mother tongues and how they shape our perception of the world.

On the other hand, English does oblige you to specify certain types of information that can be left to the context in other languages. If I want to tell you in English about a dinner with my neighbor, I may not have to mention the neighbor’s sex, but I do have to tell you something about the timing of the event: I have to decide whether we dined, have been dining, are dining, will be dining and so on. Chinese, on the other hand, does not oblige its speakers to specify the exact time of the action in this way, because the same verb form can be used for past, present or future actions. Again, this does not mean that the Chinese are unable to understand the concept of time. But it does mean they are not obliged to think about timing whenever they describe an action. 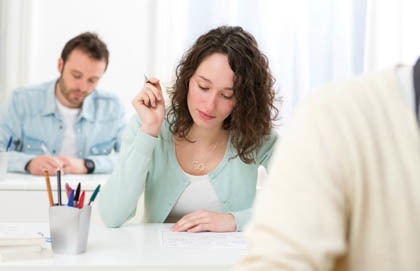 The article goes on to talk about languages which use egocentric coordinates (left, right, behind, etc.) as opposed to geographic languages, which operate almost exclusively on the north/south/east/west standard.

I mentioned this to my students today in freshman composition because we were talking about what it means to use precise language, and how that changes from language to language. I have three non-native speakers of English in the class, all of whom grew up speaking languages which have gendered nouns (and they say English is much easier in that regard because it's harder to make mistakes). It also reminds me of what Bible translators used to say about the difficulty of, say, translating the concept of "whiter than snow" in tiny coastal towns in Papua New Guinea.

If you're interested in the topic, I recommend the recent RadioLab episode about Words, which addresses some of these questions in completely fascinating ways (for instance, exploring how comprehension seems to grow as language grows—and they've been able to watch it in deaf populations).