Vacating their defense of Parliament October 13, 2011  |  By Peter Stockland
Print

The Harper government is spending $28 million to have middle-aged jumbotron-sized gentlemen dress up as soldiers and re-enact the War of 1812. Meanwhile, Canada's Parliament, 2011, has just suffered an assault by the provinces and the Supreme Court that, unless beaten back, overturns the constitutional order of Confederation.

On September 30, Canada's highest court handed down its decision in the Insite case. The judgment ostensibly involved a so-called safe injection site in Vancouver where addicts can shoot up street drugs such as heroin. The federal government had ordered a review of the experimental facility and was leaning toward closing it down.

Despite upholding the constitutionality of Canada's prohibition on heroin and other street drugs, and accepting the legal authority of the federal health minister to enforce such prohibitions, the court ordered that the injection site be kept open. Contrary to some reports, it did not actually strike down our drug laws. It did not order those laws changed or mandate a permanent legal scheme for the operation of safe injection sites. On the contrary, it explicitly refused to do so.

What it did was even worse. It simply bypassed Parliament and decreed that possession of illegal drugs such as heroin is now protected—not legal, mind you, but protected—in Canada. The country's ultimate legal authority declared certain crimes are beyond the law.

Worse becomes worst. In act of either stupendous detachment from the real world or of outright duplicity, it effectively transferred control over some criminal laws from the federal Parliament to provincial legislatures. It did so even while insisting throughout its judgment that constitutional authority for the criminal law properly belongs to Parliament under section 91 of our foundational British North America Act.

This is no mere boring constitutional dispute over the legal abstractions that drove Canadians to distraction in the 1980s. It is an overturning, by judicial intervention, of our system of legal and Parliamentary democratic process. And it will have real world effects in our streets and in our lives. 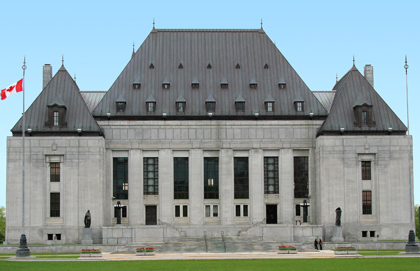 Within 10 days of the Supreme Court's Insite decision, the Quebec government announced it would authorize the opening of not just one safe injection shooting gallery, but a string of illegal drug boutiques for addicts throughout the province. Provincial Health Minister Yves Bolduc says the sites will open in a few months after a round of consultations with stakeholders, including the mayors of Montreal and Quebec City as well as advocacy groups. Nowhere in the reports of the provincial minister's announcement was there mention of plans for consultation with the federal health minister, much less any intention to ask for federal permission to open the so-called safe injection sites.

Why? Because the provincial minister no longer needs to consult or ask. Because under the September 30 decision, the federal minister effectively cannot say 'no.' While de jure control over illegal drugs remains in federal hands, de facto control is now with the provinces.

An experimental program, opened under federal authorization, is now an established entitlement to criminality. The federal minister must prove the negative of why more injection sites should not be opened. The provinces have the Supreme Court's permission to simply ignore federal law.

It's an outrageous uprooting of our constitutional foundations, a brazen assault on the prerogatives of Parliament, a naked transfer of power to the court and to the provinces, and a terrifying dismantling of the rule of law itself. If you don't care about its effects on a relatively small number of tragic drug addicts, wait until such issues as prostitution laws or euthanasia come before the court. There seems virtually no way that Parliament will be able to express its will on such matters in anything but the most pro forma manner.

When the Supreme Court handed down the Insite decision two weeks ago, our majority Conservative government could not obey fast enough. Never mind that the decision openly insulted a minister of the Crown, eviscerated his lawful authority, and by accident or design re-wrote the British North America Act. The government's response was, literally, "We will comply."

In other countries, such an assault on the established order would provoke the question: "How many battalions does the Supreme Court have?" Fortunately, we do not live in such a country. We live in a country where Prime Minister Harper could tell his ministers: "Fetch me my section 33 notwithstanding clause. I feel a touch of constitutional fight-back coming on." He could use existing powers within the Charter of Rights—i.e. section 33—to tell the court it has over reached; that its Insite ruling will be disregarded. He could do so peaceably, respectfully, legally, and implacably.

I am not a member of the Conservative Party of Canada. If I were, I would be doing two things today. I would frantically be seeking a latter-day Isaac Brock to raise the troops and push some steel into the spine of the prime minister and his senior cabinet ministers to get that fight-back going. Failing that I would, on this anniversary of General Brock's death in defense of Canada at Queenston, hang my head in shame that the party of Confederation, of Sir John A. Macdonald, has fecklessly vacated its obligation to fight for our Parliament.

Tory ministers have relentlessly campaigned to restore the symbols of Canada's historic identity. A re-written citizenship guide. The return of the designation "royal" for the navy and air force. Giving the Queen's portrait pride of place in our embassies.

Fine. Symbols matter. But actions carry the day. The actions we need now are not $28 million costume parties for middle-aged men to get themselves on the jumbotron by dressing up as the heroes of our history. What we need is the prime minister and his cabinet acting as if they believe Canada's Parliament is worth defending.