I don't remember much from high school physics, but—for whatever reason—the idea of parallax stuck. Oddly enough, parallax, the idea that what we see is often affected by where we stand, is also an important concept in early 20th-century literary modernism which acted, in some respects, as a precursor to our own postmodern moment.

Parallax was one of the ordering principles informing Joyce's Ulysses.  The story shifts from Leopold Bloom to Molly to Stephen Daedalus and to a whole host of other minor characters' viewpoints, constantly destabilizing what we thought we knew about transpired and transpiring events. Eliot's journey through The Waste Land is similarly a kaleidoscope of ever-shifting viewpoints and voices, reflecting upon the secularizing Western world between the wars. Really, it's the same narrative principle that guided television series like LOST and films like Crash or Babel.  The fixed viewpoint, that seemingly authoritative center of interpretation, becomes dislocated, making these stories more interesting, but also more unsettling: we don't like it when the ground shifts beneath our feet. 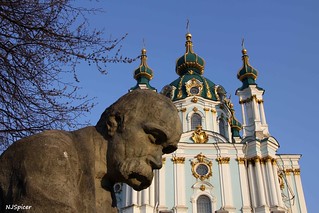 I've thought about this a lot this week as I've tried to make sense of competing claims about what is "really" happening in the Ukraine.  Kelly McParland, in the National Post this week, posed an interesting thought experiment. What if, he asks, a revolution were to take place in Mexico where a pro-US government was toppled and replaced by a government that supported—and was supported by—Russia? What would the US do? Would they sit idly by or would they get involved?

While such a situation might seem odd now, something similar happened during the "merry little war" the US engaged in with Granada during the Reagan era. As the socialist government was collapsing, Reagan took the opportunity to overwhelm the small island with America's superior military might, thereby ensuring that Communism would not gain a foothold there. To boot, there were several hundred American students and civilians living on the island whose protection, according to Reagan, validated this invasion into a sovereign country.

No School Is an Island
Religion and Realism in Canadian Foreign Policy
2014 in Review: A Call for Civic Courage

So, is Putin's takeover of Crimea a throwback to such Cold War sabre rattling and aggression we thought was behind us? If we stood in Moscow rather than in Ottawa or Washington D.C., might we see things differently? Well, for both questions: yes.

Part of the trouble, though, is that parallax, as a concept, can only take us so far. While it provides us with the necessary caution against making bold claims of absolute Truth, it can also cripple us from being able to make any claims of truth at all. In fact, as Andrew Coyne analyzed the situation, the West can't simply vacillate here and find the several hundred reasons why Putin's hand was veritably forced by the actions of the US and NATO as they encroached upon their doorstep; ultimately, somebody has to be able to say that the Russian takeover of Crimea, a portion of a sovereign, free nation, is unequivocally wrong.

I'm sure that that greatest generation who survived the second world war and lived through into the Cold War knew that political philosophies were not simply neutral opinions of nation-states, but ideas charged with truths, partial truths and sometimes flat-out untruths that had consequences in reality.  And again, this—where the rubber hits the road—is where we need to realize the limits of parallax: it can temper our epistemology, sure, but it can never be the sole foundation for our epistemology.

So where does that leave us standing? I'll be honest, I'm no international affairs buff, and I'll be the first to admit the West's complicity in horrid regimes throughout the Middle East and North Africa for the past 30 years cannot allow us to make any simplistic divisions between good and evil empires.  There's enough dirt and blood to go on a lot of hands.  Yet it doesn't mean that evil, when it rears its ugly head, cannot be named for what it is and pushed back.

I'm currently reading through the correspondence of Wendell Berry, a Kentucky farmer, Christian, and man of letters, who was toying with pacifism in his younger years. However, he soon realized that in an age where good and evil were realities, peace is not simply a stance one can attain without any cost; he writes,

Living at peace is a difficult, deceptive concept. Same for not resisting evil. You can struggle, embattle yourself, resist evil until you become evil—as anti-Communism becomes totalitarian. But I don't feel the least bit of an inclination to lie down and be a rug, either, and I now begin to ask myself if I can live at peace only by being reconciled to battle.

The way we see Ukraine, then, is largely a matter of where we stand. Yet the fact that many in Russia would like to overthrow Putin, while many in North America are apathetic to the takeover of Crimea, suggest that understandings are in no way as clear cut between East and West as our Western media (or Russia’s for that matter) might like to project.

At a certain point, we need not only the dithering talk of where we stand, but also the talk of how to make a stand when the time comes.

2014 in Review: A Call for Civic Courage

Because now that our trust might be scraped away, what we should find below it is not cynicism or gullibility, fear or cowardice, but a courage, bravery, and a firm resolve that civil society does not cower in the face of unjust forces which seek its undoing. ...