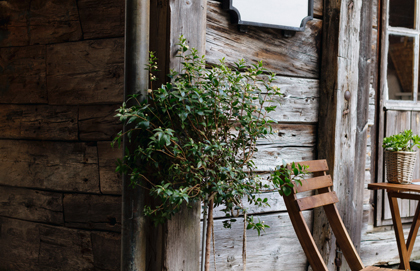 This old porch is just a long time
Of waiting and forgetting
And remembering the coming back
And not crying about the leaving . . ."
—Lyle Lovett, This Old Porch

Oh, we hold hard every year onto this week that's coming, don't we, knowing what's lying so soon ahead? Labour Day has been rounded like a highway curve. Schools briefly brighten fresh again. Nature arranges a convalescent's shawl on her own narrowing shoulders.

Evenings on my front porch, that very light illuminates the miraculous works of spiders and webs that leaves a favoured place to take a cup of tea transformed into a complex of eerily silent industrial projects, construction sites, war zones.

We live a stone-pitch from a widening of the St. Lawrence called Lac St. Louis. We can watch ocean-going freighters move through the locks on the far shore of the river that fur trade canoes followed to the interior 300 years ago. By an alignment of entomological conditions that outstrips my understanding, we have an even greater abundance of spiders than of history.

Mornings are always a festoon of strands, loops, swirls, and mandalas hanging from chairs, dangled from table tops, wrapped around window frames, drooped from the edges of the front porch light. I am the cleaner who steps, by the tacit consent of ritual task, into this variation on a hotel ballroom after a New Year's Eve bash to raise my broom and sweep the webs away.

The sentimentalist in me dislikes having to wreck what they've created, sending spider mobs scurrying, like hung-over commuters late for a train, across the porch and down the front steps. But it must be done. Creativity without restoration of order breeds an anarchy that even arachnids cannot be permitted.

I think they understand it, or at least naturally abide it, because they bide their time until late afternoon and early evening before returning to reclaim, reconstruct, renew. With a teacup at the table, I like to sit in the diminishing moments of summer light watching the spiders go up and down, rising by their mystical acrobatics, rappelling down the stone work on the front of house.

My wife and I will go together to vote today. She became fascinated in early August by the machinations of politicians in our Quebec election, and followed each twist and turn, every promise and lie, diligently on the web and television news. But after a life of political immersion, I preferred this summer to observe the intricate webs of deceit spun by the creatures with eight legs that lie so patiently in wait. They, to their credit, eat what they kill.

Yet they, too, must feel the coming of what lies so soon ahead. These last few days, this turning point of season, has seen a shift from abundance to frenzy, from activity to a furious last packing in. By some insect instinct that escapes my understanding, they seem to know, in E.B. White's words from Charlotte's Web, "Over and gone. Over and gone. Summer is dying, dying."

All too soon my broom will sweep only heavy snow from my porch and steps. All too soon a teacup left outside on the porch would fill with ice, enough, perhaps, to crack it, to leave it in shards. All too soon the tables and chairs where the spiders spent the summer building and creating will stored away against winter months of waiting and forgetting.

All too soon. But not yet. Not yet. Hold. Hold hard, for a few more slipping days.