I was sitting in my daughter’s home—half a country away from my own—listening to the murmurs of her tiny, perfect six-day-old son when I picked up for the first time Steven Garber’s new book The Seamless Life. My first grandchild, David Douglas (named for his two grandfathers) was asleep in the cradle upstairs. The same cradle that my father had crafted for his own first grandchild, Davy’s mother, 30 years earlier.

My daughter’s pregnancy had been a difficult one, followed by a long and challenging labour and delivery. I’d travelled to Winnipeg to care for her in the way that mothers have always cared for their just-delivered daughters, the way my own mother had cared for me after the births of each of my children. That evening, having finished the day’s chores, I settled into a rocking chair to read, as the baby’s newborn noises and stirrings beckoned his mother that he would soon be wanting to nurse once again.

Opening Garber’s book, I read the dedication, and was aware of a sudden, deep yearning, one that I realized had to have been born of what could only be described as fellow feeling, and one that would not have been there even seven days earlier. “For my grandchildren,” Garber dedicates his book, “longing that you will live into the vision of a seamless life, a coherence between who you are and why you are, giving meaning to what you do with the lives that are yours.”

For days I’d been reflecting on the wonder and miracle of Davy’s life and the joy of seeing his mother and father love him truly and well. My mind circled back to some words by Scottish author and minister, George MacDonald, which someone had shared with me recently: “a child is born into the womb of the time, which indeed enclosed and fed him before he was born.”

I thought about the time into which Davy had been born, how his birth bestowed my husband and me with new roles and responsibilities—as grandparents—and wondered at all that might mean in the years ahead. And I pondered the threads of continuity already woven into his life as symbolized by the cradle, and by his name.

The Seamless Life is subtitled, A Tapestry of Love & Learning, Worship & Work. Garber describes the collection of short essays and artful photographs as “a deeper and deeper reflection on one question: What does it mean to see seamlessly? To see the whole of life as important to God, to us, and to the world …”

He is a master of asking such questions. And as I read—unhurriedly, because this is a book that demands deliberation—again and again I found myself provoked to contemplation of the kinds of questions that lead to longing for what is true. 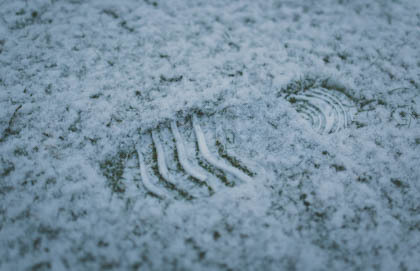 The Footsteps of a Sainted Sister

Professor of marketplace theology and director of the program in leadership, theology, and society at Regent College, Garber’s vocation has been to think deeply about all that vocation is, all that it means, and to help others do the same. The seeds of his quest were planted in his childhood in the American Southwest. Citing his cowboy grandfather’s practice of prayer and work, Garber says he was shaped by being allowed into his grandfather’s life, “summer after summer, year after year … seeing over his shoulder and through his heart as he prayed and worked.”

It was in watching his grandfather live his life, writes Garber, that he was awakened “to the reality that life was more than labor, that vocation was more than occupation—but also that the work we do matters—matters very much.”

Prior to reading The Seamless Life, vocation was not something I’d thought much about. I’d assumed it was a term that applied only to those in the professions—clergy, teachers, doctors, lawyers. But Garber changed that for me by clarifying the difference between vocation and occupation, highlighting the human disposition to dualism, and challenging me to understand the connections between what he describes as “the deeper story” of who we are with what we do.

In an online video, Garber defines vocation in terms of responding to a call.

“It’s the assumption that we live in a universe where there is a caller,” he explains, “and that as human beings we are able to respond.” We are, in other words, response able.

Vocation for the Christian begins with responding to God by loving God and loving neighbour, but then we are each also given something to care about, and we ought to care about it deeply. “None of us can care for everything everywhere,” he writes. “So, we choose to care about something somewhere.”

It is through living out that loving and caring that we build lives of integrity—coherence is the word Garber uses. But ours is not a task of mere integration, rather, we ought to be “praying and thinking and working our way toward life as it’s supposed to be.”

In the book’s opening essay, “A Beginning,” Garber challenges readers to see their lives in the context of human history, “We are sons of Adam and daughters of Eve,” he writes, “each one with histories written into the history of people who have lived through the centuries and cultures before us.”

In his concluding essay, “An Ending,” he encourages readers “to make peace with the proximate, knowing that our own wounds are too much.”

In between those two discourses—the first with its challenge, and the final with its solace—there is much to ponder. Divided into two overarching themes, his essays address what it means to be “At Work in the World,” and the struggle toward “Making Sense of Life,” forming the book’s warp and woof, and pointing the way toward coherent living and human flourishing.

The Seamless Life is destined to become a book to which I return again and again for its wisdom and beauty. But also for my grandson’s sake, that I might model for him the kind of seamless living that may lead him to long for the same.

The Footsteps of a Sainted Sister