The Social Network and Canadian Politics May 12, 2011  |  By Brian Dijkema
Print

The Social Network opens with one of the more memorable exchanges of dialogue that I've seen. The conversation—where Jesse Eisenberg (who plays Facebook founder Mark Zuckerberg) obsesses to his girlfriend over his chances of getting into one of the elite final clubs at Harvard, blatantly insulting her in the meantime—sets up a subtext that runs throughout the entire film. Whereas the opening conversation makes the viewer want to cuff Zuckerberg upside the head, by the time we get to the climax of the film you find yourself rooting for him—whom his girlfriend rightfully calls an "asshole"—to beat those nasty, elitist Winklevoss twins.

The key quote in this changing of loyalties comes when Eisenberg responds to his lawyer's suggestion that he must really hate the pair of establishment types who are suing him for all he's worth. His response describes in a nutshell the major conflict running throughout the film:

I don't hate anybody. The "Winklevii" aren't suing me for intellectual property theft. They're suing me because for the first time in their lives, things didn't go exactly the way they were supposed to for them.

The viewer has moved from a point where Zuckerberg is the "asshole" to a place where she is asked to sympathize with Zuckerberg against the seemingly invincible connections, wealth, success, and arrogance of the Winklevoss twins. Moreover, you're asked to do so while dealing with the fact that Zuckerberg is still the same guy who acted like a child in the film's first exchange. 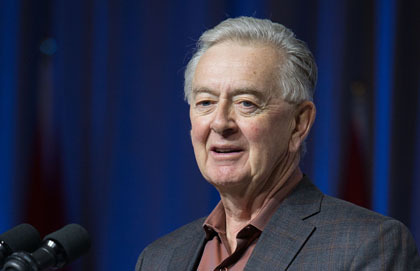 Preston Manning
Re-forming the Senate
Candid Discussions Worth Having

I was reminded of this evolution today as I read through a response in Harvard's newspaper The Crimson to Michael Ignatieff's lack of success in Canadian politics. The author, after describing why Ignatieff should have been considered the ideal candidate, goes on to decry his fate at the hands of the Canadian electorate:

The defeat of Ignatieff and his Liberal Party is, indeed, a sad moment in Canada's narrative not only for what it signifies politically, but also because it shows a widespread fear of progress.

The parallels between this response and the conflict in The Social Network are striking (if limited), and say something about how deep the entitlement of the "best and the brightest" runs.

Canadian voters opted to go for Stephen Harper, despite his socially immature reputation. And the response from Harvard? A rather melodramatic description of how "things did not go the way they were suppposed to go."

Thankfully, Ignatieff himself firmly avoided such melodrama. His concession speech—the finest of the campaign—was generous, realistic, and completely lacking in self-pity.

If Michael Ignatieff wants to lend his considerable skills to the next generation of Canadian elites—and if he ever returns to Harvard—he could do much worse than begin with that lesson in humility and character.