Indeed, the images are fascinating to look at. They evoke Detoit's grand and powerful past, but also give the viewer a glimpse into each of our futures if we were to let time and nature run its course. We only hold back the deterioration of our built lives by constant maintenance. One journalist spoke to a French family poking around the ruins of the Packard Plant who had come "to see the end of the world!" 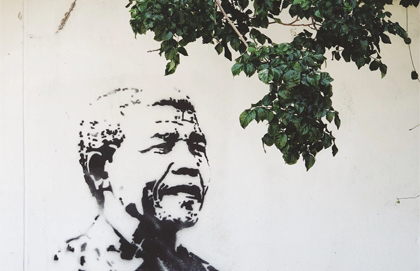 We are inundated with images every day. How many depict real life? Last week, Shauna Niequist wrote in RELEVANT about the internet being full of partial-truths, images without context, particularly in social media. She notes how it's so easy to "show the fabulous meal but not the mess to clean up afterwards."

We see the high moments of people's lives, but rarely do we see the low moments, or even the ordinary. If some of our relationships have only these levels of interaction, can we really claim "friendship"? What does it mean to "rejoice with those who rejoice [and] mourn with those who mourn," when we only see (and share) half of the story?

I'm rarely a proponent for airing your dirty laundry on social media, and I'm not often one for sharing much of anything too personal on the internet. But I do believe that it's important to not let the ways we interact on social media shape the ways we interact in real life. I hope that those close to me allow me to both rejoice and mourn with them. And, perhaps harder yet, I hope that I am able to let them rejoice and mourn with me. It allows us to keep our lives in context and to build relationships that leave you feeling fulfilled rather than disconnected. It's about knowing the story behind the picture, and maybe lending a hand with the dishes too.

Gideon Strauss, a native of South Africa, where he served as an interpreter for the country's Truth and Reconciliation Commission under Archbishop Desmond Tutu, writes on the way we remember Nelson Mandela's life.