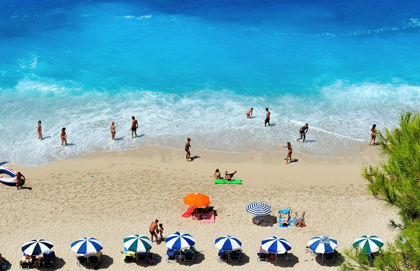 Fashions are not neutral accessories, but forms of self-expression loaded with meaning.  Blinded by gender ideology that trumpets the utter sameness in all respects of men and women, our culture ignores the harmful effects of the "barely-there" current summer fashions for women.  I would never dare broach this topic in public if I were not inspired to write this reflection through conversations with a feminist friend who works with "Trends" to equip young women to challenge the dominance of these fashions and the messages they promote.  She strongly encouraged me to be open and frank about the impact on men of women's clothing styles that are, simply put, too revealing.

So here goes.  I recall the summer -- perhaps 6 or 7 years ago -- when bare shoulders became commonplace, as spaghetti straps on dresses and tank tops became the new fashion.   A more recent development is the wearing of crop tops exposing the belly button, or skimpier versions being the equivalent of a bra worn in public.  Last summer I noticed for the first time -- unwittingly let me assure you -- the appearance of a few G-string bikinis at public beaches.  Is there no limit to the constant pushing of boundaries for what is acceptable dress in public?

Imagine if the fashion industry were ruled by an oligarchy of lecherous men, who through rhetoric, propaganda, and financial incentives, persuaded women that fashions that exploit and objectify them -- as if they were products to be consumed by male lust -- actually empower women.  That seems to be the present state of affairs, a new double-speak of exploitation as empowerment.  I propose that all men and women of good will should collaborate to publicly denounce such hypocrisy, and together promote fashions that are classically beautiful, without being provocative.

Many men would consider the beauty of women as one of God's greatest gifts.  Nothing in creation reveals the glory of God as much as the human person and the human body.  However, men who do not have a relationship with God are more susceptible to idolatry and the tendency to objectify the human body, so that the gift of beauty can be violently abused and sadly twisted into pornography, prostitution, sex trafficking, and so on.   Here is not the place to delve into an analysis of such evils, but only to note that immodesty can be a muted form of pornography, and aspects of today's summer fashions can be found in the soft-core porn of yesterday.

What is the effect on men of women's immodest fashions?  An electric shock is only a slight exaggeration.  It is an instant biological response, although the nervous system is somewhat de-sensitized through constant over-exposure.  If only women could be given a glimpse inside the brain of the average man -- to fully appreciate how hard-wired he is to visual stimuli and prone to lust.   My feminist friend tells me it can be a blind spot for women, as they do not experience sexuality in the same way.  At the same time, it is important to emphasize that MEN are responsible for our reaction to immodest dress.  We are not creatures of brute instinct, but rational beings with intellect and will.  With God's grace, we can rise above our neuro-chemistry to either moderate or sublimate sexual desires.  We are not trying to blame women, nor clamor for a reversion to a stereotype of Victorian prudery.   Rather, in the context of mutual respect in public spaces, we hope that women, in their choices for summer fashions, will be more aware of their impact on men.

Having said all that, men will still find immodesty tantalizing.  Like the mythical figure of Tantalus, ever reaching out for fruit he cannot grasp, thirsting for water that recedes every time he bends to drink.  For the masculine psyche, the sexual suggestiveness of immodesty is a taunt or a tease, because there is a real power to feminine beauty.  Beauty refined by the virtue of modesty is an ennobling gift, with the power to refresh the heart and awaken the soul.  Beauty reduced to raw sexual display can trigger lust, an excitement of the senses that leads nowhere, but often results in frustration and resentment.  Why?

Religion, Freedom, Citizenship
Not My Rights Movement
The Oxygen of Hope

In the intimate encounter between spouses, men and women unveil their bodies to each other in a promise of union and consummation.  The display of a semi-nude body in public, through immodest fashion, is a promise that will never be fulfilled.  You can look but you cannot touch.  You can gaze in admiration, but you will never taste or possess any of this beauty.  You can suffer torments of helpless longing, but you will remain alone.  What a recipe for sadness, disappointment, frustration and anger!   In this way, immodest fashions can contribute to resentment toward women.  On the other hand, I can understand the resentment of women toward shallow and superficial men who are passive consumers of images of women, who seem too lazy to reach out and connect with women of flesh-and-blood, to "man-up" and pursue women as equals, to actually experience real intimacy and mature love.

Nothing in creation reveals the glory of God as much as the human person and the human body.

Immodesty can also foster an obsession with appearance that neglects the depths of the human person.  We have all heard the comment that certain styles "leave nothing to the imagination."  What does it mean exactly?  Not necessarily that men's imaginations are incorrigibly prurient, but that in the human person, there is always more than meets the eye; a whole person is more attractive than body parts.  Because our culture is so deeply influenced by neo-Gnostic, dualist philosophy, we need to state the obvious again and again on the unity of body and soul in the human person.  As Christopher West has put it, a woman is not a body but somebody.  If a modest dress reveals somebody, a human person, it is much more alluring than the merely physical exposure of body parts.  Modesty of dress ultimately safeguards the unity of the human person as body and soul, and insists that men gaze upon women and address them precisely in this manner -- as a human person.

Rarely does anyone quote Scripture any more on the subject of immodest fashion, in part because culturally conditioned mores from the past -- like St. Paul's outmoded injunction that women must cover their heads in Church -- are simply irrelevant to us today.   But there are some lasting insights on the importance of cultivating the interior life, reminders that beauty is not skin deep.

As St. Peter writes, "do not adorn yourselves outwardly  . . . by wearing gold ornaments or fine clothing; rather, let your adornment be the inner self with the lasting beauty of a gentle and quiet spirit, which is precious in the sight of God" (1 Pet 3:3-4).  Some might suspect that this passage could promote patriarchy or the suppression of women's voice.  Yet no mention is made of a "submissive and silent person," but a "gentle and quiet spirit," which is an echo of the "meek and humble" Heart of Christ, whom all Christians are called to imitate.

It is an invitation to cultivate a spiritual life and a relationship with God, graces which overflow into the body, as the face of Moses became radiant after he spoke to God on Mount Sinai.  An inner spiritual life can empower women to appreciate more deeply their own dignity and beauty.  For men, a more sensitive and refined spirit can help us respect each woman as a person, slowly discovering that a person is also a mystery worthy of reverence.  Let us pray for the conversion of hearts of both men and women, so that each woman called to marriage may find a man who will be drawn to the light in her eyes and the inner beauty that shines in her countenance, a man capable of delighting in her and cherishing her.

I would love to see men and women march in the streets together, arm in arm, to "fight the power."  There is in the world a seductive and deceptive power inimical to both men and women, that oppresses and degrades us both.  We need to discover that we are on the same side in this fight, for we are all indeed brothers and sisters, children of the same Father.

And let us remember that men and women are not helpless victims of globalized trends; together WE are the creators of culture and the designers of fashion.  Modest fashions matter.  They can help us appreciate and celebrate an interior beauty which is a reminder of Paradise and a foretaste of the resurrection of the body, where men and women, equal in dignity, are clothed in glory and united in love.