At the risk of sounding melodramatic: a revolutionary elite seized public education in the 1970s. I saw it during my time at the University of Alberta. It was not a “conspiracy.” It was an ideology – “politics masquerading as science” – the proselytizing of a dogmatic new religion among ambitious academics. This new faith is Rousseau’s vision “Noble Savage” or “Child of Nature.”  Its promise and purpose: all we need for a glorious new Heaven-on-Earth is to tear down all authority. Destroy the Oppression of the Past, and that will “let a thousand flowers bloom.”  Like all revolutions, only the revolutionary elites have benefited from this.

Now, the natural purpose or telos of education is to prepare children for the world, the challenging, fulfilling and sometimes scary world of adults. Parents and educators must “lead out” (educare) children, out from a secure and helpless dependency within their families into competent and responsible adulthood. In this way, the new generation can contribute happily to their own families, community and country.

Since we are all born at a particular time and place, we must all learn to speak its language and navigate all its norms – family and dietary norms, commercial, civic and political norms, artistic norms, and most importantly its calendar of public festivals. Because anthropos zoon politikon, because humans are political animals, because we need each other so deeply, our language and cultural norms are the very air we breathe, tools we use and feasts we make merry together. This is our Common Good, the frame and substance of our shared happiness.

So, for over 3,000 years, every civilization worldwide – in China, the Mediterranean, India – has been handed on by a Pedagogy of Community or Virtue. This the Greeks called paideia:  training in its mores, etiquette, practical skills, artistic tastes and popular pieties. Each culture has its peculiar understanding of courage, self-control, justice and respect, foundational virtues that we all must share, because we live happily only when living together. This is our Common Good.

Our Common Good is not intolerance. It is not oppression. Children’s education in their native culture is real empowerment, real belonging and real happiness. The alternative, the attempt to build a norm-free society of self-expressive individuals – the ideology of celebrity, where “everyone is special” – is a recipe for loneliness, meaninglessness, aimlessness, despair.

Nevertheless, just 50 years ago, following the late 1960s Summer of Love, Paris riots and Woodstock, an unannounced, unadvertised revolution began seizing the land. It was not a violent military uprising. No armed guerillas seized the radio stations. It was a cultural revolution. Professors and bureaucrats (many of them Woodstock wannabes) seized the corridors of the university faculties of education. This revolution replaced the age-old Pedagogy of Community with a utopian Pedagogy of Liberation.

Children’s education in their native culture is real empowerment, real belonging and real happiness. The alternative, the attempt to build a norm-free society of self-expressive individuals – the ideology of celebrity, where “everyone is special” – is a recipe for loneliness, meaninglessness, aimlessness, despair.

This new theory asserts that humanity, freed by modern technology, no longer needs any moral code. We can all now do whatever we feel. It is not a new norm. It rejects the need for shared norms. The universal understanding of happiness as a reward for good habits, competence and responsibility was overthrown by a Postmodern, Neo-Marxist theory of happiness as the product of personal discovery and self-expression.

This was never an issue simply left-right partisan politics in a democratic regime. It was the authoritarian imposition by academics of a new, destructive anthropology. Neo-Marxists never appreciated that cultural norms are the very vocabulary of our shared life together. Instead, the Pedagogy of Liberation teaches helpless children that their native culture is their oppressor, their enemy. 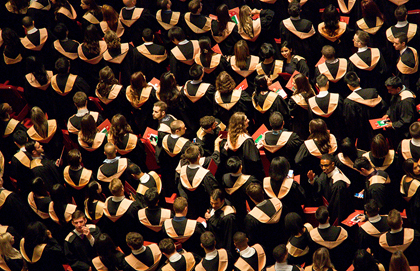 Before We Write Off "Private" Schools
God's Preferential Option for Public Schools? Some Questions
Private Schools and Public Good

No surprise, then, that young students are overwhelmed by hobgoblins of their helplessness. They swallow every catastrophe de jour, march with placards demanding their demands, and fall like lemmings into epidemic anxiety disorders and depression: substance abuse, cutting for girls, suicide for boys, life on the street and public dependency.  The simple, undeniable fact is that in an age of unprecedented prosperity and opportunity, our children are drowning in anomie, purposeless solitude.

This Pedagogy of Liberation was introduced into public education by Postmoderns like Paulo Freire (Pedagogy of the Oppressed, 1968) and Ivan Illich (Deschooling Society, 1971). Their “critical pedagogy” condemned what Freire called the “banking model of education,” an emphasis on useful skills. It condemned good habits – “conformity” – as the suppression of creativity. Simply tearing down our existing culture, they believed, would unleash the creativity and spontaneous cooperation of the next generation. Then the experts rediscovered Herbert Marcuse’s 1955 Eros and Civilization, devoted to grounding economic socialism in sexual liberation. Since modern industry has solved "all questions of material existence,” Marcuse argued, “moral commands and prohibitions are no longer relevant." Freed from economic need, even children could now explore the vast and sundry varieties of sexual intercourse.

In fairness, there was some justification for the 1960s Postmodern reaction – though, like most reactions, it magnified the problem. Four generations earlier (1880-1910), University of Chicago president and psychologist John Dewey had launched the Pragmatic or Modern revolution in pedagogy, heralding the first Reign of Experts.   Back then, what we understand as uniform public education (versus grass-rooted local schools) was really only 20 or 30 years old.

With public tax revenues now feeding standardized schooling, Dewey argued that a democratic citizenry needed only practical skills, rather than poetic or cultural education.   Running the government could be left largely to the experts (such as political scientist Woodrow Wilson), while highly-skilled citizens got on with the 9-to-5 job of building the economy.  In their spare time, citizens might shop amid whatever culture was generated by entertainment providers.  This respected their autonomy as free, democratic citizens. And by 1910,  Dewey’s psychology was required reading in Canadian teachers colleges.

The 1900 revolution “liberated” children no more than the later 1970 revolution. It assumed that citizens educated in a trade (like welding or dentistry) would go home in the evening to pick up Donne, Mozart, Montesquieu or Canaletto. It ignored the archetypal importance of our cultural norms, the res publica – such as the Plutarch and Monmouth that Shakespeare, “the whining school-boy,” learned in Stratford’s little parish school.  Deweyism trained children in trades (even math and physics becoming trades), while ignoring kids’ inevitable need for cultural icons.

So its implicit adult archetype became the highly-skilled Philistine. Contrast the icons of Lucy Maude Montgomery or Young Lincoln, nurtured on Shakespeare and the Bible, with the later Ford CEO and US Defense Secretary Robert McNamara, the classic soulless technocrat.  By the 1960s, memorizing poetry was passé.

In the generation after Dewey, anxiety grew in some small circles about the official erosion of our cultural vocabulary and archetypes. John Erskine founded the General Studies at Columbia, and Robert Maynard Hutchins (Dewey’s successor at Chicago) published Higher Learning in America (1937).

Hutchins warned that the West faced a tragedy – “vocationalism, empiricism and disorder” – unless it returned to the liberal arts, the “single-minded pursuit of intellectual virtue and truth for its own sake.” This seeded the small but enduring Great Books or Liberal Arts movement:  teachers such as Charles Van Doran, Mortimer Adler, John Senior and Jacques Barzun, and small, vibrant colleges like Hillsdale, St. John’s Annapolis, and Thomas Aquinas Ojai.

At that point, the liberal arts movement was simply a tiny, remedial effort, trying to back-fill at the college-level the eroding cultural education or paideia, needed by all students in high school. But the movement lay dormant during the Great Depression and Second World War, both of which seemed to validate the need for Dewey technocrats. In the post-war university boom, veteran students justifiably sought high-level skills in a new, complex economy.  But they needed to have gotten their paideia in high school.

Until 1968, few parents realized the deepening cultural ignorance and historical amnesia among educators themselves. Come the third generation post-Dewey, technocratic educators assumed that education was all a technology, just like biology, and therefore subject to the Iron Law of Progress.  So they saw no need to educate themselves in the pedagogical cultural canon (e.g., Plato’s Republic). Ignoring the cautionary tales of the high-tech Nazis and Stalinists, they trusted entirely in teaching techniques like “scope and sequence” for “skill delivery.” However – spoiler alert – the Great Books movement did not vanish. Eighty years later, it has now graduated – cavalry to the rescue – a critical mass of educated young teachers, intentionally nurturing the charter school movement, addressing new parental demands for real paideia.

So yes, there was some cause for the post-1968 Postmodern reaction to Modern education. The Pedagogy of Community, the commitment to a cultural Common Good and shared virtue, had already been undermined by a Pedagogy of Skills, icons defined by the marketplace. For three generations, public education itself had eroded our behavioral norms, artistic tastes and popular pieties, in celebrating the Technocrat as the ascendant cultural archetype. Liberationists like Freire rightly objected to the commercial atomization of social solidarity by “the banking model of education.” Yet tragically, they swallowed the technocratic faith in Progress, an irreversible Progress of Freedom. They aggravated the public isolation of children with a self-contradictory icon of happiness: unfettered, solipsistic self-expression.

The Pedagogues of Liberation recognized the erosion of the communal culture under the Pedagogy of Skills. Not entirely their own fault, they were already too badly educated, too resentful, too enamored with technological progress or maybe just too lazy even to want to recover their own cultural roots. Their ideology now tells them that their heritage is a cruel parade of injustice, so they’re unequipped to question the smug provenance of the ideas feeding their own ideology – what Julien Benda called The Treason of the Academics (1920).  They may realize that Dewey was parroting the highly questionable John Locke, 250 years prior, but they blindly adopt Rousseau’s 200-year-old cartoon of the “Noble Savage” – a cultural icon whose model of happiness is shallow, unconscious contentment.  Moderns sat atop a 2,500-year-old olive tree and snipped the blossoms, hoping to get more fruit. Postmoderns, enraged at the pruning, hack at their own limbs, expecting new flowers to sprout in the fallen mulch.

To the long-term end of a thriving public education system, Benedikt declares that those who send their children to private schools are "bad people" for neglecting to provide self-sacrificial care for the public school system Though it is undoubtedly true that some "public" and some "private" school...