There is a telling passage in Lumen Fidei that gives us a clue as to not only how we need to live our faith but also how we must read this document. The Holy Father points to Saint John's distinction between "believing" Jesus and "believing in" Jesus. We "believe" Jesus when we accept His word, His testimony, because He is truthful. We "believe in" Jesus when we personally welcome Him into our lives and journey towards Him, clinging to Him in love and following in His footsteps along the way. This is the great divide, as it were, between thinking that we know and truly knowing. To "believe" is to have a textbook knowledge of something. This is not knowledge, it's knowing about. To know is something else. "Believing in" is to know. It implies that we will get off our perch and enter an experience. As Catholic theologian Luigi Giussani said again and again: Truth cannot be learned; it can only be encountered. It involves a journey, walking the walk, clinging to Him.

I cannot separate the reading of this encyclical from a number of encounters I had this summer because they, like Lumen Fidei, accompanied me along my path and helped me to move forward in my life. Without these encounters, I would have had difficulty being touched by the encyclical—yes, touched, because to know its contents is not to know it. Without being moved by the words of the Holy Father, it is difficult to have even a glimpse of what he is talking about.

I was on vacation twice this July with a large group of friends: once in Val-David, Que., and the second time in Chilliwack, B.C. Many beautiful things happened on those days, but it was the stories of two women that struck me in particular. One of those women is Jen from Vancouver. She has been happily married for two years. Her husband is a walking exemplification of "salt of the earth." Jen told me that her greatest desire was to have a child and that this was proving difficult. As a result, she and her husband went to a fertility clinic, where they were told that they would not be able to have children. This sent Jen into a deep depression, which required medication. Jen had only two hopes at that point—two things that could change her life and make her happy. One was to have a child; the other was to get off the medication.

Neither of these wishes was in the cards, at least not in the early summer. In the month of June, Jen went to the annual Spiritual Exercises of the Fraternity of Communion and Liberation for Western Canada. She did not want to go but was convinced by a friend to come along anyway. There was a lesson, on video, by Father Julián Carrón in which he said that there is no circumstance that Christ cannot enter. Bang! Everything changed for Jen. It's not as if everything would be a cinch from then on and she would live happily ever after in a kind of never-never land. It's that she understood something that most of us will rarely, if ever, perceive: that our woundedness is not meant to be skipped over. Our wounds are the privileged marks through which Christ makes Himself present to us. So clear was this to Jen that she said to me, "I know it's a paradox, and I can hardly believe I'm saying this, but in a strange way I am grateful that I cannot have children—though I still deeply desire them—grateful that I must take these pills, because this is the way in which Christ becomes real, His Mystery reveals Himself to me." 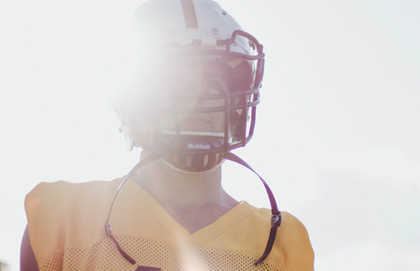 Pigskin Crossing Pattern
An Exercise in Faith
Inspired By Example

Jen thus helped me to understand Pope Francis when he says that we need to "believe in" and not only believe. It just won't cut it for me to believe a list of truths pronounced by Christ, as a bag full of propositions that I can use to help me through life. Jen had to "welcome Him" into her life, as the Pope says; she had to trust the man on the screen who asserted that Christ can enter any circumstance of our lives. To trust Him, she needed to "love" Him; that is, affici had to kick in, affection, something that made the object—Christ—touch her. Without this love, it would be impossible for Jen to see her circumstances in a different way. As Francis reminds us, "Faith's new way of seeing things is centred on Christ. Faith in Christ brings salvation because in Him our lives become radically open to a love that precedes us, a love that transforms us from within, acting in us and through us."

Indeed this is one of the eyeopening aspects of Lumen Fidei. We are so dualistic in our normal way of living the faith—because we think that we already know—that the fact that Christ's love precedes us does not even enter the horizon of our existence. Thus nothing surprises us. We know all about the Church, we know all about the faith, and even live morally good lives, but without ever having a Christian experience. We normally think we are the authors of our good even as we say we believe. As Francis notes, "It would make no difference at all whether we believed in him or not." But faith is something different. "Faith is born of an encounter with the living God who calls us and reveals His love, a love that precedes us and upon which we can lean for security and for building our lives," Pope Francis writes.

On my vacations, I also had the privilege of meeting another friend, Cathy, from Vancouver Island. Cathy is going through a trying period as she is undergoing cancer treatments. For that reason, she had initially contemplated not joining us but then decided at the last moment that she could not miss these days together with her friends. At the end of our vacations, I asked Cathy what she thought of them. Cathy is the height of discretion. She simply smiled, turned her palms skyward and said: "Everyone here loves each other so deeply. It helps me to see. I can see more." As I read the encyclical, I cannot help but marvel at how Cathy distilled Lumen Fidei for me in those three terse statements.

What did Cathy help me to understand? The Holy Father says, "Faith transforms the whole person precisely to the extent that he or she becomes open to love. Through this blending of faith and love we come to see the kind of knowledge that faith entails, its power to convince and its ability to illumine our steps. Faith knows because it is tied to love…." This possibility of seeing more—that is, of knowing—is not the fruit of effort but of an encounter and the followup to that encounter. Francis paraphrases Saint Gregory the Great when he says, "love is itself a kind of knowledge possessed of its own logic."

Giussani would often ask who knew us better, the psychoanalyst who could analyze us in a detailed fashion or a person moved by our presence? Cathy, like any of us, did not have to "do" anything to deepen her faith in the sense that she did not have to develop a work plan or make some extraordinary effort. She needed only to follow that dynamism that is proper to our humanity. Something, someone attracts us and we follow this. Francis beautifully refers to it as "a process of gazing, in which our eyes grow accustomed to peering into the depths," and "seeing then becomes a form of following Christ." It is not a question of my abilities, my capacity, but rather a matter of following that gaze, entering His gaze, as it were.

It would have been difficult for me to "see more" if I did not have Pope Francis, Jen and Cathy accompanying me on my path. For me to "believe in" is a choice that I make in the intimacy of my heart. But it is not an "intimistic" choice, for "it is through an unbroken chain of witnesses that we come to see the face of Jesus." How is it possible for me to separate "believing in" from "belonging to"? Francis tells us that we cannot. "Faith is not simply an individual decision that takes place in the depths of the believer's heart, nor a completely private relationship between the 'I' of the believer and the divine 'Thou.' By its very nature, faith is open to the 'We' of the Church; it always takes place within her communion." Our belief, our faith "is expressed in response to an invitation...it exists as part of a dialogue and cannot be merely a profession originating in an individual."

To the extent that the Pope's words sound foreign to us, we understand how far we are from seeing, knowing, being illumined by faith. We are so steeped in our ways of understanding, in which we equate goodness with a personal capacity, doing good with results and efficiency, love with an emotion, that we think we already know. Francis does not moralize about our condition. He cuts to the quick and, through this encyclical, invites us to pick up again, in the only way in which this is possible: through an encounter. This is what happened 2,000 years ago; this is how we have all met the Christian experience, and it happens again and again as happened to me this summer with Jen and Cathy—and, of course, Francis.

As the Calgary Stampeders prepare for their annual Labour Day Classic against their CFL rivals from Edmonton, team chaplain Rodd Sawatzky’s role is to help the team’s strong cohort of Christian players remember true victory is in Christ. The director of pro ministries for Athletes in Action spoke recently with Convivium’s Peter Stockland.

An Exercise in Faith

Where, Father Julián Carrón asks, is our first love?