This essay was originally published at On Being, republished with permission.

It’s one of my favorite phrases related to rainwater harvesting: induced meandering. The premise is simple. Whenever you can encourage rainwater runoff to slow down, to take a more circuitous route, to wind its way down a hill rather than rush full speed toward the gutter, storm drain, or gully below, you increase the likelihood for induced meandering — and the likelihood that this runoff can become a resource rather than a nuisance.

When runoff slows down, it sinks in as it flows down slope. As the water sinks in, it irrigates plants. This not only provides water for those particular plants but, over time and given enough precipitation, refills the groundwater tables below, contributing to the overall health of the surrounding region.

Take, for example, geraniums. The geraniums in my garden never get watered, unless it is by the rain. In Baja California, Mexico the dry period is typically between April and November. These geraniums live with basically no overt watering for six to seven months.

When it does rain, those geraniums are fed by the stream that flows, winds, and meanders past them. This runoff, from the road above, can be fairly strong. But as it makes its way down hill it is slowed down by both organic matter and loose granite along the path. At a certain point, the stream encounters a speed bump and makes its way into the garden, continuing to wind its way past an avocado tree, a plum, on toward an almond and from that down to an apple. Typically this is as far as it gets, but were the rain and the flow slightly stronger it would continue on its way to the orange, down past the artichoke, and on to the guava.

The premise behind induced meandering is not just to slow the water down, to give it time to sink in, but also to ensure that, as much as possible, the rainwater doesn’t leave the property but is all used, absorbed, and planted back into the ground. 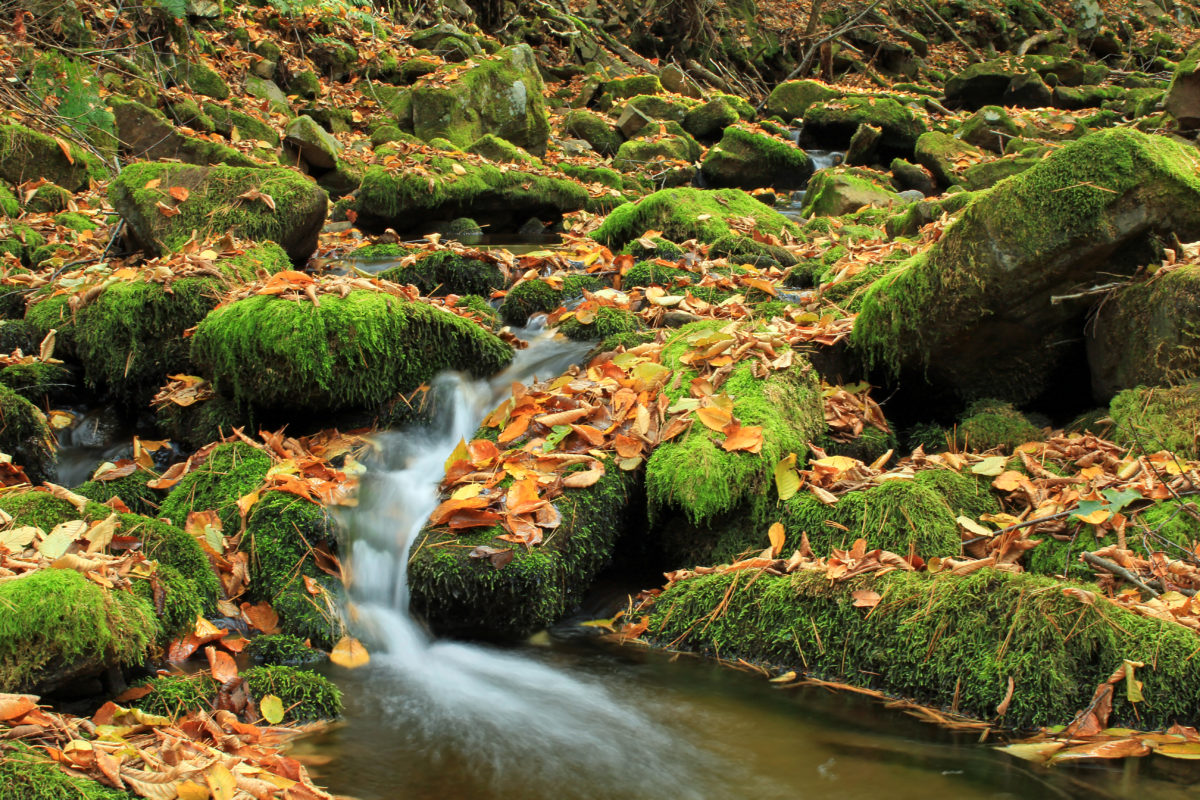 This small stream tumbles through a deep bed of moss-covered talus before joining Rauchtown Creek at Ravensburg State Park. Image by Nicholas A. Tonelli/Flickr (CC BY-NC-SA 2.0)..

So, how does one induce induced meandering? Easy.

The premise behind induced meandering is not just to slow the water down, to give it time to sink in, but also to ensure that, as much as possible, the rainwater doesn’t leave the property but is all used, absorbed, and planted back into the ground. 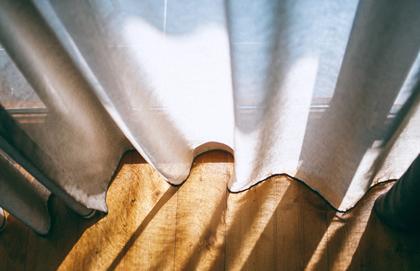 Bringing Lent Home
An Advent(ure) of the Heart
Workers Present

Action. Once you have observed the patterns of the water it is time to experiment. How might the water be slowed in the fast areas? Typically this is done by either spreading it out, or by adding curves to its path. Perhaps it is a dirt road that gets rutted from the rain; add a rock or other block near the top of the rut and water will spread out rather than make a deeper rut. Perhaps it is a downhill dirt path that, with each rain, gets cut deeper; add speed bumps in the form of rocks or dirt to help slow the water down, to encourage it to spread out as it travels.

Implemented thoughtfully, this induced meandering can provide irrigation to soil, plants, and trees long after the rains have passed. The benefits are both immediate and long term. The more induced meandering, the greater the overall health of the entire area, not just of a particular plant or tree.

Induced meandering is not just a concept for the garden, of course. In life as well as in land, induced meandering can encourage the necessary conditions for slowing down and in so doing, allowing its currents to sink in, not just run down the drain.

Today, Ash Wednesday, marks the beginning of the Christian season of Lent, the period of 40 days leading up to Easter. The season of Lent is often seen as a time to give up something: chocolate or sugar or alcohol, candy or sweets. Traditionally, Lent is practiced in this way, through self-denial. But Lent is not just about sacrificing for sacrifice’s sake or penance as punishment.

More than giving up or self-denial, Lent, when practiced intentionally, can allow time for self-examination, reflection, and preparation. It’s a time of slowing down, intentionally, so that life is given a chance to sink in, not just run off in so many directions. Induced meandering, if you will.

Rather than rush from the celebrations of Christmas and the season of Epiphany which follows, directly to the new life, resurrection, and rebirth of Easter, Lent provides a speed bump in the path of the Christian calendar. The slowing that is an inherent part of Lent is not just for the sake of slowing down, but so that life can sink in. In so doing, this season of irrigation provides health and vitality long after its rains have passed. 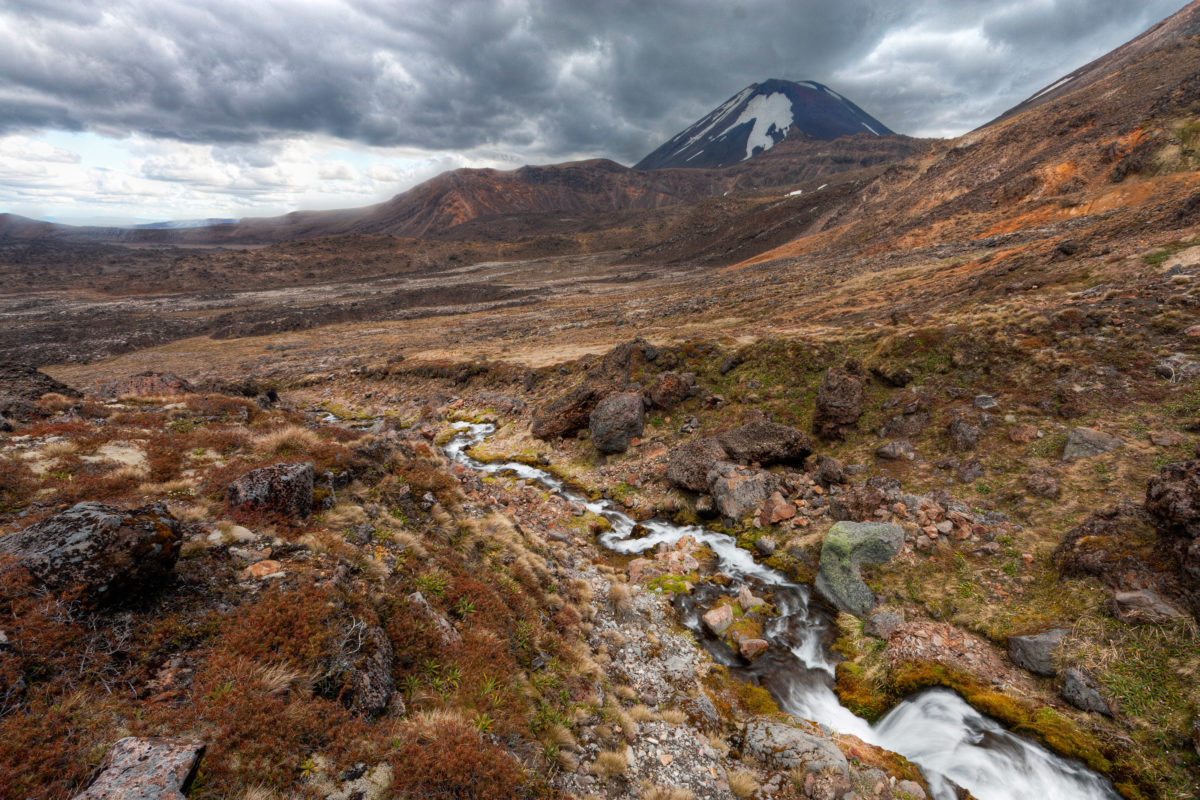 A stream north from the Oturere hut in the Tongariro National Park, New Zealand. Image by Matti/Flickr (CC BY-NC-SA 2.0)..

So, how does one practice the season of Lent in this way? Easy.

Observation. In the Christian tradition we tend to call this contemplation, prayer, or even meditation. Mindfulness is another word for it. Twenty minutes in the morning and twenty minutes in the evening can provide such a space for both clearing the mind and the thoughts, but also for examining the day, our actions, and our place in the world around us.

Action. Our contemplation, as Franciscan Richard Rohr is fond of saying, must lead to action or it is simply navel gazing for navel gazing’s sake. What changes might I need to make in my life, in the way I spend my time or my money or my energy? What rocks can I put in place to help slow down the flow of life and allow its nutrients to sink in a bit more?

Lent offers us an opportunity to slow down, to meander rather than to rush, to allow life to sink in a bit, to find ways to go deeper and not always stay on the surface. A time to observe, to pay attention, and then to act — and in so doing provide the space to move from rush to replenish. When we take this practice seriously, we plant its blessings so that they benefit not only us in our lives for this season, but also extend to the world around us.

Echoing Isaiah, Convivium contributor Brittany Beacham says the Lenten fast has to be about more than giving up creature comforts. It must mean opening the doors of our hearts – even of our houses – purely for God’s love.

An Advent(ure) of the Heart

Why rush ahead to Christmas, Convivium’s Rebecca Darwent asks, when this very moment of the Advent season – right now! – affords yet another glorious step on the journey toward Christ?

Cardus Work and Economics Program Director Brian Dijkema reflects on the opportunity that construction season provides us to celebrate the "vast array of talents and skills that it takes to keep a country and its economy functioning."