This week's Supreme Court hearing on euthanasia was about life and death, of course, but it is equally about a powerful clash of institutions.

While the so-called Carter case was argued on the merits of discovering in the Canadian constitution a right to what might be called concierge service suicide, the heart of the discussion was really the balance of power between the courts and Canada's Parliament.

All constitutional cases, by their nature, engage that balance in differing ways, particularly when they involve the sections of the Charter of Rights dealing with security of the person and equality rights. Yet Wednesday's forensic test match on euthanasia touched a tipping point that may have been brushed against only 26 years ago in the Morgentaler case on abortion; perhaps not even then.

At least two elements make the Carter case so noteworthy in that regard.

One is the steadfastness with which the government of Stephen Harper has insisted it will not re-open legislative debate on legalizing euthanasia or assisted suicide. The government insists Parliament has amply declared itself on the issue by voting repeatedly, emphatically and across party lines to keep the current laws on the books. Indeed, MP Francine Lalonde's last attempt was voted down 228-59 before it could even pass second reading in the House of Commons.

The second element is that the Carter case essentially pits the Supreme Court against itself. It ruled in the 1993 Rodriguez case that the existing sections of the Criminal Code outlawing euthanasia and assisted suicide are constitutionally valid. It is open to Parliament to pass such laws for the general good, the Court ruled 20 years ago, even if individuals feel they are being made to suffer as a result. 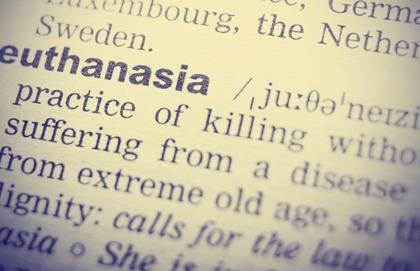 Assisted dying: When what if becomes what is
A Truly Bizarre Lapse
The Core of the Euthanasia Clash

By no means were the justices as united in upholding the law as parliamentarians have repeatedly been. The Rodriguez judgment was a narrow 5-4 decision.

"Our position is straightforward: Rodriguez is still good law," Frater said. "Nothing has changed. There is no new legal consensus. There are no new facts. There has been no demonstration that the decision in Rodriguez should be changed by this court."

Frater went even further by arguing that the trial judge made a "palpable error" in her ruling in the Carter case (named for a North Vancouver, B.C., woman who went to court to argue for the right to assisted suicide). He said the trial judge made a political, not a judicial decision when she ruled that the risks of striking down the Canada's current euthanasia and assisted suicide laws were worth taking.

"She looked down forensically and decided what the alternative should be," Frater said.  "She found on the facts that there are real risks but that those risks can be minimized. She is wrong."

Against such "overstepping of jurisdiction," he insisted, Parliament is entitled to a "wide margin of deference" for its commitment to keeping the existing laws. The country's top justices are far too polished as public performers to let raised hackles show unwittingly. It was evident from body language and the swiftness of responses that Frater's fault finding sat poorly with the high court bench.

"She was answering the question she was asked to answer," Justice Rosalie Abella protested.

"She had a mountain of evidence and she had to do something with it," another justice reproached.

And from Chief Justice Beverly McLaughlin: "You cannot prevent the trial judge from reviewing the evidence. There is nothing wrong in her deciding whether Parliament could reasonably [impose] a blanket prohibition ..." on euthanasia and assisted suicide.

McLaughlin's words capture the core of the clash. Although she was on the losing side in the 1993 Rodriguez decision, it would be improper and unfair to assume she has decided the Carter case in advance of hearing the arguments for and against. But she has clearly formed her convictions on the rights of judges to make political decisions that were once the preserve of Canada's parliamentarians. There is, she says, "nothing wrong" in a judge substituting her individual risk-management assessment of a given social situation for the wisdom of elected MPs. Even, it appears, in constitutional matters of life and death.

It could be six months before a decision is made public in the Carter case but what played out this Wednesday has immediate implications for Canada, starting here, starting now. In its response to the government's arguments, the Court has clearly staked out turf that once belonged to our democratically elected representatives. The question hanging over those representatives now is the institutional version of the one posed in the immortal words of the old Clash song: "When they kick at your front door/ How you gonna come?/ With your hands on your head or ..."

Assisted dying: When what if becomes what is

This may seem a distant concern for a far off time dependent on the abstract whims of judges and lawyers breathing rarefied Ottawa courtroom air. It isn’t.

This week’s Supreme Court hearing on euthanasia was about life and death, of course, but it is equally about a powerful clash of institutions.