Father Theodore Hesburgh died at nearly 98 years of age on February 26, 2015. The Holy Cross priest was the president of the University of Notre Dame for 35 years, from 1952 to 1987, leading a rather remote Catholic university in South Bend, Ind., to national prestige, fame and wealth. At a memorial service after his funeral Mass, Lou Holtz, Notre Dame football coach from 1986 to 1996, told the story of an energetic Fighting Irish football fan who presented his three-year-old daughter to Father Hesburgh, proud as can be that she could sing the entire Notre Dame fight song. After the little girl finished, Father Ted bent down and said, "That's lovely, sweetheart. Now, can you say the Our Father?" Father Ted always knew that it was more important to know the Lord's Prayer than the football cheer. Asked once what should be written on his tombstone, the internationally known "counsellor to popes and presidents" replied simply, "priest." Requiescat in pace.

I once officiated at a wedding where the bride was a Notre Dame graduate. She wasn't Catholic but had served Mass on a few occasions, which surprised me. "Do you know Father Hesburgh?" she asked. Of course I had heard of him. She didn't know that he was one of the more famous Catholic priests in the world. She did know that he was the elderly priest whose residence was in the Notre Dame library, famous for its Touchdown Jesus mural. When he lost his eyesight in his old age, Father Hesburgh would wander into the library and ask students to help him say Mass by reading various prayers and serving at the altar. On more than a few occasions, the kindly old priest had asked her to help. The daily Mass was the heart of Father Hesburgh's long priestly life; and when his body began to fail, it enabled him to share his love for the Mass with others in a new way.

As president of a Catholic university, Father Ted was in high demand at the weddings of couples who met at Notre Dame. He did his fair share of weddings, and his advice to the groom was always the same: "The best thing you can do for your future children is to love their mother." Good advice for men, that the vocation to marriage and fatherhood is a call to love and to serve. As a priest, Father Ted knew that better than most, for he was the head of a large family and he served them best by his love for the Blessed Mother, enthroned in South Bend atop the golden dome of the school he knew always as Our Lady's university.

I was in India recently. And there is nothing quite so extravagant as an Indian wedding, with all due respect to the big fat Greek wedding or its Italian counterpart, which is why huge Italian banquet halls are a staple of the Canadian suburban landscape. Yet there is promising news from India, where the "perfect antithesis of the bridezilla" is emerging. She is the "anti-bride — the fuss-free, carefree woman who doesn't like making a big deal out of her wedding."1 Anti-bride in India doesn't mean not getting married; rather, its a promising return to common sense in wedding plans, the complexity and expense of which would give even the most enthusiastic supporter of marriage second thoughts. 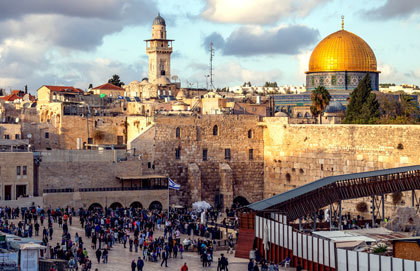 The Meaning of My Land
Who’s Your Daddy?
Marking Time With Meaning

Have you heard of Bal Kishore Das Loiwal? He can be found at the New Delhi Hard Rock Café, a traditional seat of Indian culture, singing country tunes under the stage name Bobby Cash. He got his musical start the traditional Asian way — singing karaoke. From being the lone country singer in India, he found his way to Nashville, where he was nominated for a Country Music Association Award. Cowboys and Indians may be culturally backward today, but Indian cowboys are on the cutting edge of true multiculturalism.

While we are on leading Indians in historically Western pursuits, how about golfer Vani Kapoor? Describing his daily routine to the Times of India, Kapoor allowed that he gets up at 5 a.m. and does some exercise and meditation. "One of the mantras that I follow is to tell myself every morning that I am the best in whatever I do.... I love talking to myself in the morning and planning the whole day...."2 I am sure he does. Who doesn't like hearing that he is the best in the world? Every morning. In whatever he does.

For generations, Air India's mascot has been a cartoon character, Maharajah, moustachioed and turbaned in something of a princely Indian style. The new government of Prime Minister Narendra Modi wants a less wealthy-looking image, symbolizing that air travel is for the common man not just the rich. The new Maharajah is young and thin, with spiky hair in place of the turban, wearing jeans and checking out his smartphone. I am not sure how it will play in India, but it might dissuade foreign travellers who are seeking the exotic on the subcontinent. Come to India to be welcomed by an American teenager!

Is hell cold or hot? Does it freeze over? Dante thought it was cold. Biblical images tend to the hot and fiery. Those questions will soon be moot in the Church of England, always reliable for the latest adventures in evangelization. The Telegraph reports: "The Book of Revelation speaks of the Devil being vanquished and cast into a pit of fire and brimstone at the end of the world. Yesterday, however, the Church of England consigned Satan to a decidedly less dramatic fate — [that of] being quietly designated as an optional extra. Instead of an apocalyptic battle between the forces of good and evil, the move was approved with a polite show of hands at the General Synod, the Church's decision-making body, which has been meeting in Westminster. Members voted to approve an alternative baptism liturgy, with all references to the Devil removed, as part of a drive to make services 'accessible' to those unused to attending church."3 Of course it was done with a polite show of hands; the Church of England is nothing if not genteel. As is the devil, who finds it much easier to advance with polite agreement rather than rudeness. As for "accessibility," the old idea was to make the baptized rather less accessible to the devil by requiring a formal renunciation of him. A good pastoral question to ask is whether the devil would be pleased or not with the proposed reform. In this case, we already know, for the great Anglican apologist C.S. Lewis told us that the devil's greatest success comes when he persuades people that he doesn't exist. The Church of England hasn't so much vanquished the devil as given him his due.

Roy MacGregor, who co-authored Home Game with Ken Dryden, has made a long career of writing about how Canada is hockey played on frozen ponds and backyard rinks. It's been several generations since that was true, with even rural parents driving their kids to the local rink at the crack of dawn for precious ice time. No matter. Nostalgia is always in style, and MacGregor is miffed that the money men at the Bank of Canada are nostalgic no more. "From early 2002 to late 2013, the back of that beloved blue note [the five dollar bill] held a charming illustration of a backyard hockey rink — no picture of the Queen, no reference to God — where four children are playing shinny.... On November 7, 2013, that image was replaced by an astronaut floating in space."4 I suppose I prefer the shinny to the spacewalk, too, but why the poke at the Queen and the shot at God? The Queen is on various coins and bills, so likely does not begrudge Wilfrid Laurier his position on the fiver. And it would seem a little odd to have God on the money, rendering Matthew 22:21 about rendering to Caesar altogether confusing. It's likely MacGregor wasn't thinking about that but simply indulging in a little fashionable secularism, which suggests you can have culture without any unifying cult or worship. The old image on the five-dollar bill was taken from The Hockey Sweater, Roch Carrier's story about boys who "lived in three places — the school, the church and the skating rink," and even the last was presided over by the parish priest as referee. The culture MacGregor has spent his career writing about was about more than hockey.

Soon enough the sports calendar will shift from hockey to soccer, with a corresponding shift from hooliganism on the ice to hooliganism among the fans. That's not quite fair, of course, but with rather depressing regularity, the fans of the "beautiful game" appear to be quite ugly. A marauding band of Dutch soccer hooligans trashed a 500-year-old Roman fountain by Pietro Bernini, a notable sculptor in his own right though more famous for being the father of the incomparable Gian Lorenzo Bernini. The boat-shaped Barcaccia at the foot of the Spanish Steps was chipped by beer bottles thrown and kicked by fans of Rotterdam team Feyenoord before a Europa League match against A.S. Roma in February.5 The Barcaccia is a half-sunken ship, taking on water and in distress. It was conceived by Bernini after severe flooding in Rome receded to reveal a capsized boat. From Bernini and the Barcaccia to drunken Dutch soccer hooligans, a sinking ship seems an apt metaphor for European culture.

Springtime also means that the sap is running in the maple trees. Time to take the schoolchildren to see the trees being tapped? Perhaps, but why not gather your armaments-and-security aficionados and head to Laurierville, Que., site of the Global Strategic Maple Syrup Reserve? The high-security facility, like two others in Quebec, protects not gold but liquid gold. Maple syrup that is, not oil. Thirty-eight million pounds of it: 63,000 barrels; $100 million worth.6 Last year, Quebec produced 71 per cent of the world's syrup output of 160 million pounds. With that big a stake, Quebec can rig the market — or at least try to. So it does, using the Global Strategic Reserve to hold back syrup in good production years — to keep the price high — and releasing it when the sap doesn't run. It's a venerable practice in parts of Canadian agriculture, from the former wheat board to supply management in dairy. Producers — at least those already in the game — love cartels. Now that OPEC no longer frightens households the world over with its power to jack up prices at the pump, is it long before the franco-sheikhs of maple syrup hold those pancakes hostage?