Pictured: a memorial mural found in Belfast for those who lost their lives in conflict. Photo by Peter Stockland.

Broken down, the city’s memorials alone offer a ratio of one wall plaque, garden, public tableau or statue for every 25 of the 4,000 or so people killed by the civil violence that wracked Northern Ireland’s six wee counties from 1969 until 1998.

The numbers are a stark data point in Viggiani’s meta conclusion: the social imaginary in which we live our individual lives is a peaceful kingdom, but our collective selves have a vital need to mark the history of our side. Even as Canadians with our cherished myth of enduring peaceability, it’s a dynamic that deserves attention.

“The first casualty of peace is often the memory of war,” Ulster historian Jane Leonard writes in an essay published the year before the signing of the Good Friday Agreement at long last brought the Troubles to an uneasy halt.

Her aphorism is double-edged. When violence dies, we rush to forget it. But the very process of achieving peace can leave behind physical constructions to remind us of war’s cost in casualties.

When violence dies, we rush to forget it. But the very process of achieving peace can leave behind physical constructions to remind us of war’s cost in casualties.

The body of Leonard’s essay, “Memorials to the Casualties of Conflict: Northern Ireland 1969 to 1997,” details how monuments to violent suffering become touchstones for further violence that obliterates the commemorations themselves. Such retribution can touch off cycles of attack and payback that claim additional lives and push peace further toward the far horizon. Memory’s impulse for vengeance is unleashed even as peace breaks out. 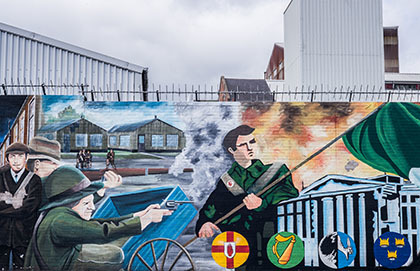 Two examples illustrate. A wall plaque and small fenced garden were placed on Belfast’s Ormeau Road to commemorate civilians killed during the Loyalist bombing of a local betting shop frequented by the neighbourhood’s Catholics/Republicans. The marker was obliterated in 1992, provoking wide-spread rioting that lasted for days and threatened to undermine any hope of peace.

Likewise, Leonard cites a case where local Protestant/Unionist politicians in Antrim, northeast of Belfast, refused to unveil an outdoor memorial to police officers “murdered by the enemies of Ulster” because they knew they, in turn, might be murdered by Republican paramilitaries responsible for the original killings. Words alone were sufficient cause for justified fear of further violent retaliation.

For Canadians, such events might seem geographically distant and wrapped in historic fog. Yet in the fresh past, we have found ourselves in an escalating action-reaction pattern with regard to the histories we entrust to commemorative sites.

No, last Sunday’s toppling of the statue of Sir John A. Macdonald in Montreal was not comparable to Bloody Sunday in the Northern Ireland city of Derry in 1972. As repulsive an act of cowardly vandalism as some might perceive it, the only head lost was poor old Sir John A.’s iron noggin. It can be repaired or replaced and re-attached.

Neither Montreal nor Halifax-Toronto-Winnipeg-Regina-Calgary-Vancouver-pick-your town are Belfast, of course. But there was a time when Belfast, at least as a synonym for modern civil carnage, wasn’t Belfast either. From the mid-19th century to the first quarter of the 20th century, it was one of the great industrial cities of the British Empire. But by mid-century, sectarian, political and cultural fault lines manifested in the city’s physical spacing and tribal public displays pushed it into increasingly violent urban decline.

Is that some kind of prophecy for Canadian cities or Canada as a whole?  No. But it is worthy of attention and understanding as a replicable phenomenon. It need not happen here. We can look to current events south of the border in Portland, Seattle, Chicago, and Kenosha Wisconsin to see why we must take care that it doesn’t.

One critical way to exercise that care is to deepen the discussion over the human, all too human, nature of commemoration itself. We need to quickly move beyond Prime Minister Trudeau’s chastisement of Alberta Premier Jason Kenney for using provocative language. And we absolutely must cease the current parrot squawk talk that creates a useless dichotomy between “preserving our history” and the forced removal of feet-of-clay statuary.

The past isn’t a script set down in non-revisable stone. History is always open to honest revision. If everyone needs a good editor, our collective memories can benefit from one too. At the same time, vandalizing and emptying out public spaces under the delusion that such acts make yesterday a better today is sad sack politics that only fosters democratic weakness.

What we need above all is a respectful but robust public conversation, seeding a resonant Canadian vocabulary, about the nature of public memory: who remembers what, why, and how, but also the way in which the stories that communicate such remembering lie alongside each other, creating boundaries in some instances and openings in others.

What we need above all is a respectful but robust public conversation, seeding a resonant Canadian vocabulary, about the nature of public memory.

In Talking Stones, Elisabetta Viggiani writes eloquently, “In societies that undergo a crucial period of transition after decades long internal conflicts, where a selective and partisan use of the past has helped perpetuate communal divisions and hatreds, the study of how the past is remembered and commemorated acquires further relevance in light of present circumstances and future development.”

Memorialization, she writes, can move us beyond the sadness of individual and tribal loss, or the self-satisfaction of achieving minimum first-stage reconciliation, and incorporate memory as “an active and evolving practice (that) shapes political developments and has a transformative power in…society.” According each other justice in our differing commemorations, we can minimize, if not eradicate, the need for histories based on attack and defence, dominion and toppling.

At a minimum, Sir John A. Macdonald, warts and all, might be able to keep his head because all others around him are no longer losing theirs.

In this week's essay from Northern Ireland, Convivium's Peter Stockland encounters a young man whose grandfather was murdered on Bloody Sunday 1972 and waits to hear loyalist-unionist drums beat again in Belfast this Friday, July 12.