Yes, VIRGINIA, there is a Santa Claus. He exists as certainly as love and generosity and devotion exist, and you know that they abound and give to your life its highest beauty and joy.

These immortal words, with their message of faith and hope that transcend time and ephemeral human circumstances, were part of an editorial in the New York Sun, dated September 21, 1897. It was written in response to a query by eight-year-old Virginia O’Hanlon, who wanted to know if Santa Claus really existed.

It is not 1897, but 2020. The year of COVID-19, the global pandemic that’s holding the whole world in its cruel grip. There has been a deadly war in the Caucuses between Azerbaijan and Armenia, and an apocalyptic explosion in Beirut. Terrorist attacks in Austria and France set Europe’s nerves on edge. In Syria, the decade-long conflict between the ruling regime and opposition forces drags on, with COVID-19 and international sanctions adding to the misery of a war-decimated population.

The world seems trapped in an endless cycle of gloom and doom.

So, if little Mariam—who fled from Syria to Lebanon in the wake of the ISIS genocide of Christians and other minorities, or little Anahit, now facing a bleak, lonely Christmas in Yerevan after her home in Artsakh was bombed to rubble — asked me the question today, what would my answer be?

As a journalist covering international relations, I have followed the Machiavellian machinations of corrupt politicians, witnessed-—sometimes first hand and sometimes through the eyes of contacts on the ground— the agony and despair of refugees forced to flee faith-based persecution and violence. I have interviewed women victims of sexual violence, and daredevil humanitarian heroes who have risked their own lives to rescue them.

And yet, today, in the year of COVID-19, my answer to all those children who fled their dearly loved homelands and are now living in fear, poverty, and uncertainty, would be the same as that of Francis Church, the New York Sun editorial writer of 1897.

Yes, little Mariam and Anahit (and everyone reading this article), there was, and is, a Santa Claus.

The real Santa Claus—not the Americanized, commercialized version that we see year after year on TV and in shopping malls, those sterile temples of consumerism. He was St. Nicholas, the fourth-century Bishop of Myra, then part of the Roman Empire, but now re-named Demre, and in the Antalya province of southwestern Turkey.

And he was a persecuted Christian like Mariam of Aleppo and Anahit of Artsakh (Nagorno-Karabakh) and 260 million others around the world. Infuriated by Nicholas’ Christian beliefs and refusal to worship Roman gods, the Emperor Diocletian threw him in prison, where he was likely tortured.

But he was later released by the Emperor Constantine the Great. The Bishop was known for his generosity and kindness and for giving gifts to poor children. This made him the prototype of the mythical, red-suited, sleigh-driving Santa Claus that the world knows now.

In today’s world, amidst the gloom and darkness of war, terror, and hatred, there are people who keep alive the spirit of St. Nicholas, the early Christian Bishop—and prove that love, generosity and devotion exist. They shine the light of Christmas in war-torn lands and bring smiles to the faces of traumatized refugee children and the surviving adults in their families.

One of these is Haik Kazarian a Canadian-Armenian who has put his comfortable life in Montreal on hold and travelled to Armenia to help refugees fleeing Artsakh. 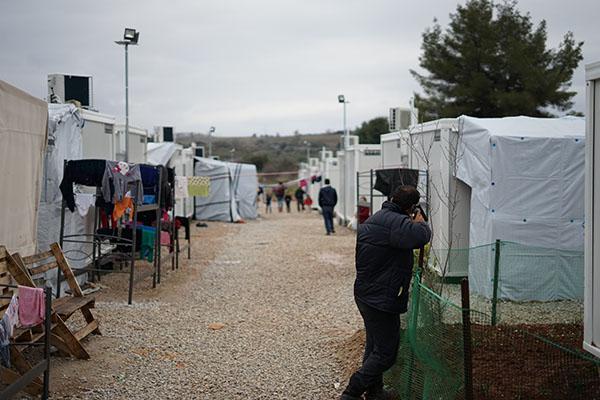 This disputed territory is home to a large population of Armenians, but for historical reasons is within the political boundaries of Azerbaijan. A deadly war erupted there between Azerbaijan and Armenia in late September and ended in a crushing defeat for Armenia.

Refugees from Artsakh are fleeing in droves to Yerevan, Armenia’s capital, where Kazarian works long days as a volunteer humanitarian helper. He has established a non-profit organization for the purpose called Transparency Charity NGO.

“Right now, many refugees who are here (in Yerevan and surrounding areas) are coming to grips with the fact that they may never see their homes again,” Kazarian said in an interview.

“I was once a refugee child myself, and the suffering of people, especially children in similar circumstances, is etched deep in my heart and soul.”

“But we (he and other volunteers) want to give the refugee kids a little Christmas. In Armenia, probably because of the Russian influence, Santa Claus is accompanied by a Snow Queen. We are now collecting gifts and candies and plan to go to the different villages dressed in these costumes and distribute them, along with the winter clothes,” he said.

The winter clothes Kazarian referred to are the brainchild of Nuri Kino, leader of A Demand for Action (ADFA), a Sweden-based NGO funded by private donations and staffed exclusively by volunteers.

A cooperation agreement between ADFA and Kazarian led to funds raised by ADFA being sent to Armenia. The plan was to buy food and hygiene products for refugees while the war was still raging, and the exodus from Artsakh to Armenia had just begun. Kazarian agreed to oversee the distribution of these care packages.

“When I saw a video of one of those kids shivering in the cold while Haik and others were distributing food in Armenia, I couldn’t sleep at night,” Kino said in an interview from his home base in Sweden.

“I was once a refugee child myself, and the suffering of people, especially children in similar circumstances, is etched deep in my heart and soul,” he added.

He recalled how he and his family were forced to flee Christian persecution in the 1970s, in the Tur Abdin region of southeastern Turkey—once a Christian stronghold but now a fond and distant memory for most of its indigenous Christians.

Determined not to let the Armenian refugees freeze in the cold of this mountainous territory, Kino immediately sent out an appeal on social media for new or gently used winter clothes and shoes.

“The people who support ADFA’s charity work are truly amazing,” he said. “I expected to send 20 tons of clothes to Armenia, but we ended up with 100 tons donated by people from all over Sweden.”

After a massive packing operation, with hundreds of volunteers pitching in to help, two transport trucks carried most of these clothes from Sweden to Armenia and the rest were sent to Syria and Lebanon. Some were sold to raise money for suffering African Christians.

“Christmas should be celebrated in a festive and holy way, in a safe place,” continued Kino. “But far too many children won’t have that kind of Christmas.”

“Christmas should be celebrated in a festive and holy way, in a safe place. But far too many children won’t have that kind of Christmas.”

He said that despite having to cancel two major fundraising events due to pandemic-related restrictions, and many of the usual donors being hard hit by the economic downturn, ADFA hopes to send $40,000 US to Lebanon in time for Christmas.

“We have opened a new office in Beirut and there are long line-ups of people waiting every day for food and essential needs. But so far, we have never failed them,” he added.

Other NGOs and churches are also engaged in the relief effort. The Canadian diocese of the Armenian Apostolic Church has established the Artsakh Humanitarian Fund to help survivors of the war that has left thousands dead and others severely wounded and disabled.

“Armenians and non-Armenians are contributing generously to this cause,” Father Zareh Zargarian, Vicar of the Canadian diocese, and parish priest of the Holy Trinity Armenian Apostolic Orthodox Church in Toronto told Convivium in an e-mail. He added that donations raised through this fund will be sent to the Mother See of Holy Etchmiadzin—the Spiritual center of all Armenians.

So yes, dear reader, there is a Santa Claus. He exists because love and generosity and devotion—exemplified by the vision and labour of generous individuals and groups—bloom in the darkness of a world torn apart by hatred and enmity.

Many of us are fortunate enough never to have known persecution because of our faith or ethnicity.

May we be moved by the spirit of the original Santa Claus, and those who follow in his footsteps today, to light candles of hope in the lives of these forgotten victims of war and violence. To lend a helping hand to the persecuted minorities of the world who would otherwise face a cruel winter and perhaps—in the words of John of the Cross, 16th-century Spanish mystic and poet—a long “dark night of the soul.”

Most Canadians would struggle to find the remote Caucasus region on a map but that doesn’t mean our hands are clean, Susan Korah writes.