Alan Jacobs takes on Aaron M. Renn on the subject of sacred space in a blog post on The American Conservative.  Renn's original post asks some version of the question, are American suburbs less than cities because they lack sacred space? Renn answers in the affirmative; Jacobs, not so much.

In his response, Jacobs challenges Renn on a number of points of inadequately defined terms and formal logic, rather like a professor spanking a student for sloppy thinking in a paper. But I find Jacobs' critique less compelling than Renn's original question, which is a good one, even if his answer is a little uneven.

Part of Jacobs' problem with Renn's piece is its lack of clarity on what is meant by "sacred space." Jacobs clearly has ecclesiastical space in mind, while Renn seems to vacillate between churches and civic space without drawing sharp distinctions. While this irritates Jacobs, I get Renn's point: one of the things that make cities different (and better) than suburbs is space that—whether overtly religious or "merely" civic, connects us to transcendent ideas of community, sacrifice, history, and perhaps even eternity. I am untroubled by Renn's failure to sharply divide these spaces into religious and civic categories. 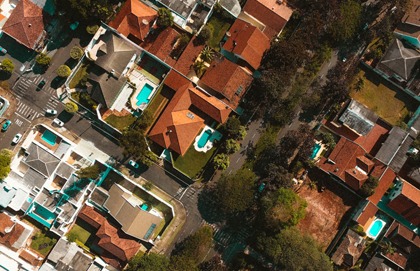 To go further, I think the tendency to want to divide such spaces into either spiritual or civic boxes is actually part of the problem of suburbs. With their over-reliance on single-use zoning, suburbs desire neat categories that spaces like Indiana's War Memorial confound. Is it a monument? A shrine? A park? A civic space? Sacred ground? Yes, yes, yes, and yes. Ditto for Times Square, a boundaryless zone in midtown Manhattan that is arguably one of the most sacred spaces in America despite its utter lack of either churches or monuments (if you don't count the statue of George M. Cohan). Sacred space, in the sense Renn means, refers to space that is shared in a community's sense of itself, rather than space that is consecrated for religious purposes only. And it is this space that suburbs lack, mostly if not completely.

Suburbs surely have as many or more sacred spaces than cities if all you do is count steeples. And suburbs have abundant "public space," which in suburbia means parks. Parks are good, and it is a public good to have them, but they fall short of the sacred in either Renn's or Jacobs' reckoning. Leaving aside parks, suburbs are almost entirely private, and rely, as Renn astutely points out, on transient commercial enterprises like Down Home Pizza to serve as public gathering space for a generation of high schoolers, giving way to other establishments for subsequent generations. Suburbs generally lack spaces that are monumental, memorable, and transcendent, whether religious or civic.

Jacobs spends the last half of his rebuttal debunking another of Renn's points, that suburban churches are architecturally inferior to urban churches. Here Jacobs fails completely, referring alternately to suburban London churches (unfairly bringing Europe into it), the excellence of Willow Creek (which to me is more reminiscent of a shopping mall than a church), and the irrelevant point that urban churches are underpopulated. He does observe, correctly, that new evangelical congregations in urban areas tend to meet in repurposed commercial space, which to me seems rather beside the point. And I hope those congregations will grow over time into thriving urban churches that will once again place a high value on design, as their long-ago predecessors did. And some urban churches (Jacob's Well in Kansas City for example), thrive in beautiful older buildings that lasted longer than their founding congregations did.

So if we agree not to be all huffy and pedantic about defining our terms like a scholar researching a paper, I think Renn wins this grudge match in a clear decision. I appreciate Jacobs' insightful reflections on urban versus suburban churches, but I think he missed Renn's larger point, which is that suburbs just don't have much going on in the way of sacred civic space, where a person can contemplate his or her place in the created order as a citizen, not just as a consumer.

I agree with Greusel that suburbs lack certain civic spaces, but such a reduction of people and their place is hardly a charitable reading of what suburban spaces really offer ...