A Journey through NYC Religions started in the summer of 2010. Very early into our travels, the non-believers in our crew were asking themselves why they should be doing a journey through the religions of New York City. I too was wondering what to tell them. I was unlimbering from a tight defensive position around my own faith.

We stopped at a florist-bookstore-church run by a Haitian American woman who was locally respected as a wise woman. After listening to her for a bit, I realized that she really was a shrewd and good woman. So, I decided to ask her for advice.

As the summer rains roared outside, they threw a wave of steam into the shop and were mixed around by a loud aircraft-propeller-sized fan. When I asked my question, I wasn’t sure that the shopkeeper-pastor had heard me. Nor did it occur to me that my crew of reporters, who were sitting a bit back from the interview, could hear either. I was wrong.

She heard me precisely and gave really wonderful advice. My crew’s ears immediately perked up, because they knew we were talking about them.

“We Christians always think we know the answers. We need someone to tell us when we are wrong,” the local wise woman said. “That’s what your reporters can do—tell you when you are wrong.”

As we went outside, Melissa Kimiadi, with the other reporter nodding, exclaimed, “I can’t believe you asked her that. That you asked her about our conversations!”

I realized that Journey’s future was at stake but was impressed with the advice, so I asked, “Well, what do you think about what she said?”

Creativity and kindness is not limited by religion, because all religious believers have souls, consciences, and imaginations given by God.

The sun had come out, and the rain had stopped for a moment. We were walking down a steamy sidewalk. I could feel the humidity brush by my face as Melissa answered.

“You know, what she said, it made a lot of sense. What do you think?”

As I agreed with the advice, I knew that I could listen to my very junior reporters with little religious experience as fonts of wisdom. I could feel my defensive crouch just ease away. My faith actually increased. I said, “I think she is right. I feel really good about her definition of our working relations.”

This turning point in the summer of 2010 led to a redefinition of our journalism, the public square, and the city in which we live. As we practiced the interaction of mutual learning, we were beginning to see that the urban public square that was desperately needed for our times was one in which believers of all types and non-believers could listen to each other sympathetically and empathetically, arrive through open minds and open hearts at a rough objectivity, and, if necessary, a scepticism about claims that didn’t match up. We came to call this “sympathetic objectivity.”

It is quite different from the usual way of practicing journalism and public debate here in the United States. In the news business, “investigative journalism” is seen as the ultimate standard, and its methodological trinity is, in this order, scepticism (since everybody lies); objectivity as a result; and, maybe, sympathy or empathy at the end. Reporters should always keep their distance from those they are interviewing. As a result, a great deal of distrust is built into the reporting process. 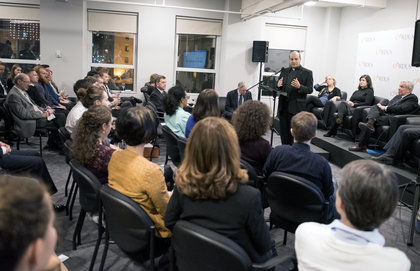 Reporters like to fool themselves that their “objectivity” will win over the public, but many people sense the psychological distance of the reporter from the audience. A Stanford psychologist has found that people are highly accurate in reading what other people really think about them. So, when a journalist feigns sympathy or empathy over their scepticism, people can pick up the ploy.

The result is a rising distrust of journalism, so much so that the profession is one of the most distrusted professions in the United States. This is true in Europe also.

In fact, most reporters went into the profession because they wanted to help their communities. But as their education and adjustment to the newsroom culture took place, they became more and more distant from their audience and came to place more and more reliance on investigative reporting as their reason for existence. We are trained to go for the jugular, not for the heart. And journalists like myself have ended up despised and mistrusted. Sometimes we also end up as cynics, which seeps into our reporting.

At A Journey, we discovered that “community journalism” is a better route to objectivity and investigative journalism, if needed. We start with the conviction that every religious group has an interesting story that the rest of us would like to hear about. The goal of our interviews is to let them reveal their hearts and minds in ways that the rest of us can appreciate. People can judge themselves whether the products are good or bad. They don’t need snarky reporters to make judgments for them.

Creativity and kindness is not limited by religion, because all religious believers have souls, consciences, and imaginations given by God. Maybe the believers mess things up and forget who God is and what the full truth is. But it is obvious that people of different faiths are not completely alien to each other. Furthermore, in the democratic public square, we must figure out how we can help each other.

I am reminded of Jesus’s admonition to “love your enemies.” Notice carefully—he doesn’t say “tolerate your enemies” or “convert your enemies.” He says something that is more robustly appreciative. We believe that the best way to get interviews and mutual help is when you appreciate something that the other person says or does. For example—and it is a very minimal thing—every religious group has a certain cuisine that the rest of us have come to love. Whenever we visit this halal (Muslim-approved, similar to Jewish kosher) restaurant in Jamaica, Queens, we love the roasted meats and the sweets. A barely identified mosque sits atop of the restaurant.

For the long run, it is much more likely that we can tolerate each other if we appreciate each other. And mutual appreciation is an effective foundation for gaining a hearing for one’s faith.

New York City is no longer the Sodom and Gomorrah that it used to be. Nor is it any longer an example of Harvey Cox’s 1963 book The Secular City. It is not quite a religious city, but there is too much new religion here for it to be called “the secular city.” New York is a liminal city that is somewhere between secular and sacred. It is a post-secular city of spiritual movement, questioning, and creativity. We feel that European cities are just beginning to move toward this modern development.

We are showing the new reality by journeying down all 6,374.9 miles of our city’s streets, every uncounted alleyway, and quite a few hallways to map and photograph every religious site and to interview with sympathetic objectivity religious leaders and laypeople at every site. We accumulate masses of data to drive our stories. We say that our very detailed coverage of religion in New York City is like the animation produced by Pixar studios. We are constantly pushing to show more and more religious details in every crevice of the city so that after a while New Yorkers start to say, “Of course, we take it for-granted that religion is natural to New York City. It is all around us.”

A new form of journalism, scholarship, and politics is needed so that non-believers and people of different faiths can learn to talk, hear, and act together. They won’t always agree, but once they are committed to blessing each other, that is, appreciating each other, the disagreements become more constructive.

We have visited every mosque in New York City, over three hundred of them. We sent women journalists into conservative mosques. At least one mosque was part of an Islamic denomination that had never let a reporter into their mosques here or abroad. But sympathetic objectivity works, because the mosque leaders sense our good-heartedness. I remember the evening when the leader of a very, very conservative mosque met me in the parking lot after a council meeting to reassure me that our female reporters would be treated well.

“Don’t worry, Tony, we will take care of them as if they are members of our own tribe.”

And they did. To quote something he tweeted about Journey’s methods, Jeff Chu, formerly of the business innovation magazine Fast Company, wrote, “Open hearts and open minds make for better interviews and better stories. Skepticism, later, if necessary.” And over eight thousand religious sites later with 38 million viewers in six years, here we are.

So what are our next steps?

During our journeys, it became clear that the models of leadership used in church and seminary training programs are based on elite or corporate models. The slogan seems to be, change always comes from the elite at the centre of things. In fact, that was not true as far as religion in New York City goes. The outsiders, people in the boroughs or transplants like Tim Keller, were the ones who brought change to the city. Insiders joined them. Many of the outsiders, of course, pushed forward and have started to enter elite circles. But elites by themselves seldom want change because it would upset the status quo with them on top. Remember this model of social change resembles the course of Christianity: Jesus, an outsider from nowheresville, pushes toward the centre, disrupts things, and fundamental change comes about.

So, we need working-class models of leadership and church planting, theologies of innovation, elite corruption, racism, and classism, and a renewed focus on the religious-motivation factor in learning and innovation.

The counting of the social services of the faith-based groups in the city starts to show us for the first time the true size and detailed presence of faith-based inputs to the public good. We also need to add how religion is also an innovator in recognizing, tackling, and solving urban problems. At present, social innovation of religious groups seems to be underappreciated. There needs to be much more news media and scholarly attention on the value of religious innovation, in addition to the highly strategic, straightforward counting of the value of faith-based contributions. Churches are urban transactional centres that amass interactions that create disruption, innovation, and global connections.

We need more Journey-like strategies and investments in communications media. This type of detailed, street-level, and data-driving reporting will help revolutionize the churches’ and general public’s understanding of the true nature of social life and civic culture in our cities.

If the Quebec government is compelling school kids to invent fantasy religions, is the endgame to have us all worshipping the state and nothing but the state?

Today, Gideon Strauss introduces us to his beloved Outremont through the eyes of Valérie Amiraux, author, scholar, professor, and Outremont resident.