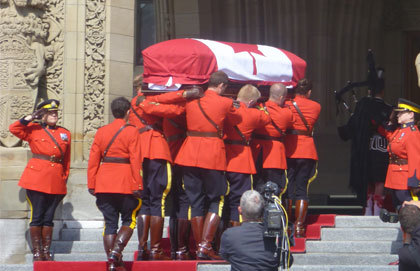 Like most Canadians, I knew Jack Layton mostly through the political persona shaped by media and political marketing machines. Twenty-some-odd years ago, I was a teenaged partisan and Jack Layton emerged on the scene as a lefty Toronto alderman with an aptitude for making the news. He was an easy target for caricature. My respect for him changed when I first met him. He had become leader of the N.D.P., and I ended up sharing a table with him when he spoke at a Canadian Club luncheon. The typical political niceties that accompany such luncheons were taking place when I shared the story of how his father, a Conservative M.P. in the eighties, spent an hour with me when I attended my first political convention in 1981. Robert Layton invited me to join him for a meal and made this 14-year-old believe that my perspectives mattered and had value. After hearing the story, Jack reminisced about his dad and segued to talk about the importance of family and relationships in a political game that is so often destructive to both. When we parted at the end of the event, he looked me in the eye and said, "Thanks for sharing about my dad."

We met a few other times but always in group settings. This exchange provided me with a glimpse under the surface, but still Jack Layton was for me a political persona, an image on a screen, a name in the political news whose views mattered because people listened to what he said. Canada's political possibilities depended in part on his skill and on his mistakes.

His passing is a significant event in shaping the next decade of Canadian politics. The N.D.P. hardly seems ready for a leadership race which inevitably will be divisive. Now a coalition between Quebec nationalists, trade unionists, communitarians and causal activists, environmentalists, and prairie social gospel populists, the party will need to be forged without a unifying personality. This will take time, and provide an opening for the more-experienced Liberals to assume the de facto role of Opposition to the government. My guess is that even a few in the Bloc Quebecois are looking at a fighting chance against whoever might be Mr. Layton's successor, especially if he/she does not come from Quebec.

Discussing politics seems callous today. Death is a great equalizer: politicians and public personalities die, just as those whose name only appears in the newspaper obituary. We are like the grass that flourishes and is renewed in the morning, but fades and dies in the evening, the Psalmist tells us. A thousand years are but as yesterday. Like the Prime Ministers and Opposition Leaders of yesteryear, the march of history will continue without them. The issues which seem so compelling and dominate the headlines for a day, week, or even a year, will be reduced to a paragraph or two of legacy. But for the day, week, or year, the issues need to be dealt with and insofar as we are discussing Mr. Layton's death (and not the thousands of others who die today) because he was a political leader of influence, we cannot ignore its political dimensions.

Still, the first thought that came to mind this morning was not of Jack's politics but of his person, even though our interaction was brief. It is a reminder the small things, the love and relationships we hold dear, the word we share with a stranger that shows respect for them, are what give expression to what we believe and who we are. In fact, these will probably have a more significant legacy than the headlines.

I will be praying for those who feel Mr. Layton's loss in a personal way, that their pain may be soothed. I will respect him as a tenacious and capable advocate of policies which he sincerely and capably advocated. Our politics would work better if there were more like him. I will remember him through the lens of our single exchange in which he displayed an authentic humanity.

Indeed Jack, you will be missed.