This quincentennial year of the Reformation offers us at Convivium an opportunity for reflection that, I hope, will mark a spiritual exchange of gifts.

Convivium’s publisher and its editor-in-chief are Catholic, and even Catholics who recognize the need for reform in the 16th-century Church regard its division as a calamity and contrary to God’s will for the unity of His flock.

Convivium is a project of Cardus, where the founders and almost all of its personnel are in the Calvinist tradition, for whom the events marking 1517 will have a celebratory character.

Five hundred years later, in Cardus’ little patch of the vineyard, Catholics and Reformed work together daily, not in a spirit of mere toleration, but of genuine flourishing. So how will we think about the Reformation this year, as we head toward Reformation Day on October 31st, five centuries after Luther published, as it were, his 95 Theses?

(In the online world, I note that often the comment boxes say that a particular author “nailed it”, though in the Internet it is not possible to nail anything to anything as there is no thingy-ness to nail. I wonder though if the expression has roots in Luther. Or perhaps it is nautical, as one nails one’s colours to the mast.)

I – and others too, I am sure – will return to the theme over the year, but herewith some initial thoughts. I was in Rome last week, and had the opportunity to visit St. Peter’s Basilica on the most spectacular day to do so, February 22. In the Catholic liturgical calendar it’s the “Feast of the Chair of St. Peter”.

There are a few feast days during the year that do not celebrate a saint whole and entire as it were, but an aspect of the saint’s life. For example there is a feast for the conversion of St. Paul on the road to Damascus, and for St. Joseph as a worker.

The Chair of Peter marks the authority of Peter and his successors – the popes – as universal pastors of the Church. The relevant biblical quotations encircle both the cupola and nave of St. Peter’s in letters five feet tall:

To be in St. Peter’s on the feast of the Chair was a blessing, an encouragement to think about what it means in a year heavy with history. I hope this year at Convivium gives us the time and space to explore that history.

Bernini has two works that dominate St. Peter’s – the baldachino over the main altar, itself built over Peter’s tomb, and the Chair of St. Peter and Holy Spirit window in the apse. On February 22, the chair is illuminated by dozens of three-foot tall tapers, celebrating the patronal feast of the basilica and Petrine office.

The Altar of the Chair has a special significance for me, as I was ordained a deacon there on October 4, 2001, together with my classmates from the Pontifical North American College, the seminary I attended in Rome. On that occasion I wrote an acrostic explaining Bernini’s Chair to the pilgrims who came. (It follows below.) 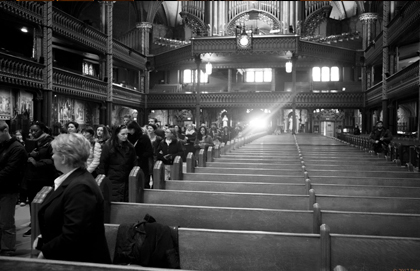 Illumination and Arrival
Closing The Apology Book
Division in the Church

Thinking about the Reformation in St. Peter’s is suitable. The building – and financing – of the current St. Peter’s was itself a major issue leading up to 1517. Was the splendour of St. Peter’s worth the division of the western Church? Clearly not, but the Reformation would likely have taken place regardless, for the contested issues were wide and deep.

The decoration of St. Peter’s does have something of a Counter-Reformation – or Catholic Reformation, as some prefer to put it – polemic, though. Bernini, who lived a century after Luther, clearly expresses the Catholic claims to unity through communion with Peter in his apse design. The presence of the Church Fathers – Ambrose, Augustine, Chrysostom and Athanasius – represent that unity over time from the apostolic age, and they also depict the universality of Peter’s mission, represented here by west and east, Latin and Greek. (There is a bit of polemic there, too, as Bernini gives the Latin Fathers the bishop’s mitre, but the Greek Fathers are bare-headed.)

What would my Reformed brethren think in St. Peter’s on its patronal day? Aside from the beauty of Bernini’s Chair, what might they think of what it represents? Those are conversations we can have in 2017 that did not take place a century ago in 1917, when the fourth centenary of the Reformation was marked. At that time it was not rare to find Catholics who would have regarded Protestants as heretics destined for Hell, and Protestants who would have regarded St. Peter’s as an apt symbol of the Whore of Babylon (Rome) – flashy, worldly and ornamented.

There were truths expressed – if incompletely – in those older formulations. The great Catholic theologian Hans Urs von Balthasar wrote a famous essay entitled Casta Meretrix (the chaste prostitute) exploring the tradition on the holiness and sinfulness of the Church. Protestants would be more familiar with the simul iustus et peccator of Luther, expressing the same reality.

Recently I was reading the autobiography of Gregory Baum, the former Catholic priest who taught at St. Michael’s College in Toronto and latterly at McGill. It’s a most interesting document from one of the most influential liberal, or dissenting, theologians of his time.

Baum recalls being at Vatican II before he resigned from his priesthood. He reports a conversation with a young Father Joseph Ratzinger – the future Benedict XVI – in which they are looking at the inscription inside the cupola: Tu es Petrus… You are Peter. Baum remembers Ratzinger saying that to be complete, it should also include the later verses of Matthew 16: Retro Satana… Get behind me Satan.

I don’t know if Ratzinger said that, but there is truth to it. The primacy of Peter is willed by Christ, but can be exercised according to worldly considerations, in which case it becomes an obstacle to the unity it is meant to serve.

To be in St. Peter’s on the feast of the Chair was a blessing, an encouragement to think about what it means in a year heavy with history. I hope this year at Convivium gives us the time and space to explore that history.

The Altar of the Chair of Saint Peter

(Written by Father Raymond J. de Souza for his ordination as a deacon in October 2001, which took place at the Altar of the Chair in St. Peter’s Basilica.)

Pilgrims find in St. Peter’s Basilica two focal points: the Altar of the Confessio (main altar), built over the tomb of the apostle, and the Altar of the Chair, which dominates the apse. Both are the work of Gian Lorenzo Bernini (1598-1680), whose work here put the definitive stamp on the Baroque period. If architecture is music frozen in stone, then the Vatican Basilica is a great hymn of thanksgiving to God for the life of St. Peter the Apostle and the gift of his continuing ministry in the Church.

Experts consider the Altar of the Chair a work of both architecture and sculpture. The dimensions alone are a testament to Bernini’s surpassing genius: the Chair itself is over 20 ft. tall, the figures of the bishops between 13 and 16 ft., the whole work weighs over 150,000 lbs. – a massive project that took nine years to complete (1657-1666). Yet the scale gives rise to an even loftier purpose, namely, the symbolic representation of the ministry of St. Peter in the Church, handed on through the generations in an unbroken line from the Galilean fisherman to the Polish philosopher, poet and playwright, Pope John Paul II, the 264th Successor of the Prince of the Apostles.

The center of the work is the “Chair of St. Peter”, referred to in Latin as a cathedra, whence derives the English word “cathedral” (the church in each diocese wherein the bishop has his cathedra). This bronze sculpture is actually a very large reliquary, housing the remains of a wooden chair held by tradition to have been used by St. Peter himself when he lived in Rome. The cathedra of a bishop is the symbol of his authority to govern and teach the Lord’s flock, and so the cathedra of St. Peter represents the ministry of the Bishop of Rome as the foundation of the Church universal, a foundation willed by the Lord Himself (Mt. 16:18) and sustained by His own prayer (Lk. 22:32).

Rather than power and domination, that ministry is one of love and service, as depicted on the Chair by the scene of St. Peter kneeling before Jesus, making his threefold confession of love and receiving in return the threefold commission to feed Christ’s sheep (Jn 21:15-17). The three medallions above the Chair on the ceiling depict the source of that ministry and the price which it exacts. In the center is the consignment of the keys, flanked on the left by St. Peter’s crucifixion and on the right by the beheading of St. Paul.

Unsupported in mid-air, the entire Chair appears to be held aloft by the outpouring of the Holy Spirit through the window above. At the base are four giant figures of the early Fathers of the Church, two from the East and two from the West: (left to right) St. Ambrose, St. Athanasius, St. John Chrysostom and St. Augustine. When the Litany of the Saints is sung during the Rite of Ordination, all the saints depicted in the apse will be invoked.

Studying Bernini’s “homily in bronze” teaches us that the Successor of Peter is a source of unity for the whole Church and a repository of the Christian tradition. He is assisted in this role by his fellow bishops, the saints of the Church and the great Christian thinkers. Yet ultimately his work is sustained by no human power, but by the Holy Spirit, who never fails to be active in the Church.