Just when you think Justin Trudeau has his prime ministerial act together, he starts playing Justy the Clown, distant cousin of loose-lipped Crusty on the Simpsons.

There must be a thwarted theatrical explanation for it. Despite Opposition efforts to paint him otherwise, Prime Minister Trudeau is clearly nobody’s fool. He might not have the intellectual acumen of his late father, Pierre. But, then, how many of us do?

What Trudeau fils undeniably has is a shrewdness and tenacity that have let him wildly overachieve by causing others to consistently underestimate him. He won a massive majority against a veteran political opponent known for his strategic brilliance. He has largely sustained his government’s popularity long past the usual honeymoon phase of electoral politics. As my Convivium colleague Father Raymond de Souza recently pointed out, his shuffle of leading cabinet ministers, including the deft dispatching of former Liberal leader Stephane Dion, showed as much royal jelly as has been seen in Ottawa since the Chretien years.

Yet for all that, things pop out of his mouth from time to time that leave Canadians scratching their heads over whether there actually is anything more than air and hair there.

At the very start of his cross country “listening tour,” the prime minister blundered into musing about “phasing out” Alberta’s oil sands at a time when the province is on its knees economically.

Then, as if it weren’t enough to scare the daylights out of Albertans about their fiscal future, he went to Quebec and summoned up the specter of ugly language wars past by refusing to speak English to voters in the province’s Eastern Townships.

It’s a mug’s game pinpointing which bobble-headed play was worse. Obviously, threatening the livelihood of an entire province by talking about getting rid of its primary industrial driver is inexplicably chilling. Yet the cultural sensitivities of Quebec’s anglophone population about the legitimate place of English in the province are no less acute than Albertans’ rightful fears for their pocketbooks and provincial treasury. What is most mystifying is why the prime minister felt the need to pull in trouble’s tail by raising either issue.
Whatever the explanation, as veteran Quebec journalist Nancy Wood wrote recently on CBC.ca, it’s time for Justin Trudeau to remember he’s not just acting a part. He is the prime minister of all of Canada. It’s time for him to quietly leave the over-sized shoes, the face paint, and the fright wig at home.

Prophecies, like free advice, are usually worth what you pay for them. But it’s at least paying attention to this article from The Atlantic.
Related Stories 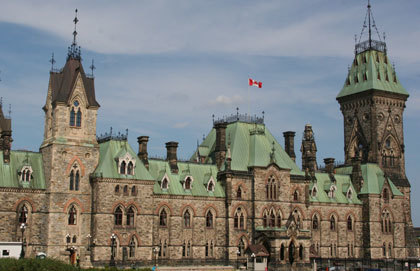 When Why Goes Wild
Trudeau Versus Trudeau
Justin's Pipe Smoke

On the Atlantic's "'He Is Going to Test Our Democracy as It Has Never Been Tested'":

Uh-oh. The White House lawyer who once fought to cover up Richard Nixon’s lies and abuses of power is now having nightmares about America’s new president. John Dean, a key figure in the Watergate scandal of the 1970s, sees in President Donald Trump all the worst traits of his old boss – without Nixon’s “one redeeming quality of a functioning sense of shame.”

Worst of all, Dean predicts, no waterfall of scandal will wash a Trump presidency away through impeachment as happened to Nixon. Why? Because Americans are too desensitized to political scandal?

“Unless Trump is a such a disaster that the public rises up and changes control of Congress in the mid-term elections, he is very safe.”

Prophecies, like free advice, are usually worth what you pay for them. But it’s at least paying attention to this article from The Atlantic.

On the Montreal Gazette's "The trend of people living alone is more acute in Quebec than in most of North America":

There’s politics. And there’s life. Sometimes they seem to go for weeks, months, and years without talking to each other. Apparently in Montreal these days, that’s not an unusual condition in general for a rapidly growing number of people. They, it seems, increasingly finding themselves without any kind of soul mate to talk to about anything.

Statistics released recently show Montreal now has the third highest percentage in North America of people living their lives alone. Their abandonment of the collective religious ethic upon which Quebec was founded, and dumping of the accompanying social reality of large extended families, has resulted in growing isolation. It has meant a lot of one-bedroom high-rise apartments where the solitary are home alone.

And while Montreal has its joie-de-vivre and celebrates itself as the city of festivals, a lot of those folks looking at themselves in the mirror day after day aren’t exactly overjoyed with their lives. They’re suffering physically and mentally.

As my former Gazette colleague Henry Aubin writes: “The growing trend toward living in isolation — in particular by the elderly — might also do nothing to dampen Quebecers’ appetite for anti-depressant drugs. Quebec has less than one-quarter of Canada’s population, yet a 2011 McGill study says the province accounts for more than one-third of the country’s anti-depressant prescriptions.”

It gives a whole new meaning to the term Quiet Revolution.

When Why Goes Wild

Since early February, Canadians have been deluged daily with rhetoric and reportage about the SNC-Lavalin affair. But Convivium Publisher Peter Stockland argues that for all the words, no one yet knows why.