This issue of Convivium sketches the path that our common law has carved from a muddy field at Runnymede, England, 800 years ago to the Canadian Charter jurisprudence of today.

Unlike many magazines, we at Convivium tend to shy away from "themed" issues for reasons of simple conviviality: If you're not interested in the theme, you're not included in the conversation. Yet the signing of the Magna Carta, like the coming into being of our own Charter, was such a turning point of history that we felt it necessary to modify our ways. Whatever else the enduring significance of the Great Charter, it affirmed in writing the primacy of the principle that no one, not even the king, is above the law.

The anniversary of that event is such that to mark it, copies of the Magna Carta, on loan, are being toured across Canada, and will be displayed in Ottawa, Toronto, Winnipeg and Edmonton as of June 12. (See www.magnacartacanada.ca/magnacartacanada for more information).

It is something we feel should engage Canadians given that in1982, 767 years after the Magna Carta, our own Charter of Rights and Freedoms was made the supreme law of this country in the process of repatriating the constitution. The proclamation of our Charter legally subordinated the Canadian Parliament to the courts, ultimately to the judgment of nine justices of the Supreme Court of Canada. We became, as the saying goes, a constitutional rather than a parliamentary democracy.

Whether that is a good thing or a bad thing, it is has transformed Canada in ways even the Charter's architects would have been hard pressed to imagine. And for all that it has set right, it has also created confusion as the courts set about re-shaping our society in response to legal arguments rather than democratic votes. 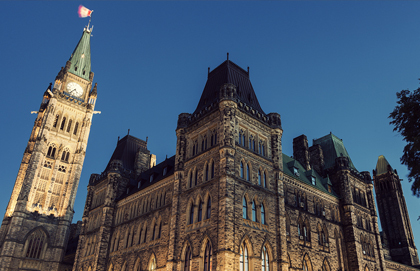 Letting Up On Religious Freedom?
Acts of Good X 150 = Canada
Good News During a Secular Winter

At the entrance to the House of Commons, there is a bar beyond which only elected MPs and officers of the House may pass. That bar has been superseded by hired barristers pleading before appointed judges. As a consequence, the shaping power of law on Canadian society has become so complex that even our most incisive minds can become befogged by it.

In his Sea-to-Sea column, for example, Father Raymond J. de Souza takes on two decisions from the Supreme Court dealing with religious freedom. The Loyola case involved a private Catholic school in Montreal. The Saguenay case centred on prayer before a municipal council meeting. By the time Convivium's editor-in-chief is finished discussing them in his column, both are shrouded in mists of misunderstanding.

Befitting someone who gives sermons to captive audiences on a weekly basis, our editor uses an expanse of words to make the point that he disagrees with both decisions. More, he makes the rather pointed point that he disagrees with me when I argue that, on balance and taken together, the decisions were positive for religious freedom and faith in Canada's common life.

Beneath our convivial disagreement, however, there is a deeper question to be distilled. It is the question that was at the heart of both Loyola and Saguenay. It is the necessity of State neutrality toward religion in order to ensure our freedom of religion.

As former Loyola High School principal Paul Donovan puts it so well in The Conversation this issue, taken together the two cases affirm that the very principle preventing the State from imposing nonreligion on religious institutions or individuals also prohibits the State from imposing religious belief on the non-religious. Under the rule of law that has evolved from the Magna Carta, the State cannot dictate how, when and to whom free and democratic people must bow.

An illustration helpful by its surface outlandishness shows why. In authoritarian Spain, General Franco had a picture of the Pope on his wall. During the Spanish Civil War, because he required German assistance to fight off Stalinist revolutionaries, the picture of the Pope came down. A picture of Hitler went up. It remained up throughout the Second World War because Franco, though a devout Catholic who hated Hitler, needed Germany to respect Spain's refusal to enter the war. After the Second World War, Hitler's picture came down. The Pope went back up.

Spain's "neutrality" required the expediency to which the State, absent the rule of law, necessarily bows. Obedience alters to fit time and circumstance. But neither prayer nor the rule of law can follow the path of such expediency. As the evolution of the Magna Carta from the mud of Runnymede 800 years ago makes evident, the rule of law bears with it the steadying weight of history. Prayer, of course, goes even further, and points us to eternity.

Letting Up On Religious Freedom?

Conservative MPs took one as a team fighting the government’s “values test” in the Canada Summer Jobs debacle. Then the Tories seemed to forget why continuing the fight still matters, writes Convivium Publisher Peter Stockland.