The pope did not mention McLuhan by name, yet Benedict's remarks follow the celebrated Canadian media prophet's line of thinking about the relationship between medium and message.

As Convivium editor-in-chief Father Raymond de Souza argues eloquently elsewhere in this issue, McLuhan is remembered for coining "the medium is the message."

"The task of witnessing to the Gospel in the digital era calls for everyone to be particularly attentive to the aspects of that message, which can challenge some of the ways of thinking typical of the web" Benedict said in his World Communications Day remarks. "First of all, we must be aware that the truth which we long to share does not derive its worth from its "popularity" or from the amount of attention it receives. We must make it known in its integrity, instead of seeking to make it acceptable or diluting it. It must become daily nourishment and not a fleeting attraction.

"The truth of the Gospel is not something to be consumed or used superficially; rather it is a gift that calls for a free response. Even when it is proclaimed in the virtual space of the Web, the Gospel demands to be incarnated in the real world and linked to the real faces of our brothers and sisters, those with whom we share our daily lives!"

Those sentences are marching orders for the Cardus Convivium Project, one part of which you hold in the form of Convivium magazine. Those involved with the project, which will unfold in various ways over the coming months and years, consider it our attempt to provide a measure of that "daily nourishment" in ways we believe have been lacking in Canada for a long time. 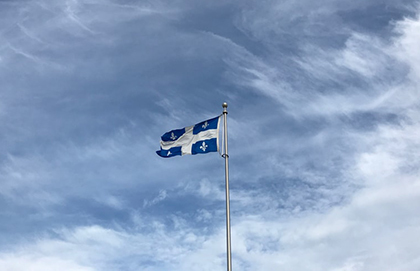 And while Benedict's language is obviously explicitly Christian and papal (Is the pope Catholic?), we also believe there are rich sources of sustenance to be shared across the spectrum of authentic religious faith—even with those of lost or absent religious faith who yet have genuine interest in the questions religious faith raises for daily life.

Our objective is to address matters and present writing of a standard that communicates the need for reflection, debate and engagement well after the last page is read. Our concern is not the specific benchmark of Convivium readership. It is, rather, the opportunity to create a robust and enriched community of readers who see it as an integral connection to, in Benedict's words, the "gift that calls for a free response."

As Cardus president Michael Van Pelt says in the "Conversation" feature in this preview edition, it is deep communication that propels us to move and change.

"Actions . . . are very rarely rooted in a spontaneous idea," Van Pelt says. "Most often they're rooted in ideas that have been bandied about for many years. Poetry is written about them. Debates rage in the pub over them. And then suddenly, they're done. But the conversation came first. We want Convivium to be a place where that conversation takes place in Canada."

In religious terminology, that is often expressed in the time-honoured axiom of faith following liturgy. But as Ottawa Archbishop Terrence Prendergast says in his essay on changes to the Catholic Mass that are scheduled to take effect in November 2011, the progress of faith from liturgy produces consequences that alter life itself. The archbishop takes us behind the scenes of the Vatican committee that oversaw the renewal of the English language Mass. Much more, he takes us back to the confluence of mass faith, liturgy and boyhood life that led him to the priesthood.

"It was [the] Eucharistic spirituality so alive in my Montreal childhood that drew me to Christ and became the first evidence of God's call on my life to the ordained priesthood," he writes.

Charles Lewis, religion editor for the National Post, explains how those forces align even in the most worldly—and potentially faith-hostile—environment as he leads us along the path and over the obstacles of living out religious faith in a contemporary newsroom. In the end, Lewis acknowledges, dealing with religious issues obliges him to be aware of the depth, and necessity, of his own faith.

"I do not think I could [do] the job without believing in God," he says. "If I didn't think that God is real, how could I cover a subject that is really all about God?"

To borrow Lewis' phrase, the Convivium project is "really all about God," but borrowing further from Pope Benedict's World Communications Day message, it is also about linking God in the real world "to the real faces of our brothers and sisters, those with whom we share our daily lives!"

Since such sharing is the essence of the word "convivium," we warmly invite you to join us at the Convivum table, where the nourishment will be neither middling nor medium but large and open and contained in the message itself.