Just four days before dying on Good Friday, 2013, Ralph Klein was more lucid than he had been in months, knew that his death was imminent and was very much at peace with it, his pastor says

Reverend Ray Matheson, the congregational care minister at First Alliance Church, says he went to visit the former Alberta premier on Tuesday, March 26 at the long-term care facility Ralph was living in.

"When I walked in the room he put out his hand and said, 'Ray!' " Matheson said.

"I sat down beside him and Ralph said: 'My ship is going to sail soon.' "

"And I said, 'It's going to sail to a good place, Ralph. You're going to go to be with Jesus,' and we talked about Heaven and he was so peaceful and looked so joyful," said Matheson.

"Ralph grabbed my hand and held on really tight and we prayed. I'm confident that Ralph is with Jesus and that he's in Heaven, that he's got a full and keen mind, even better than he had in his prime, and that he's whole in every way."

Ralph Klein's public memorial service [was] held [April 5, 2013] at the Jack Singer Concert Hall. Since his passing on March 29 at the age of 70, there has been an outpouring of affection from across the country and even from around the world toward the personable politician who was Calgary's mayor from 1980 to 1989 and Alberta's 12th premier from December 14, 1992 to December 14, 2006.

Matheson says during their final prayer together, he shared with Ralph verses from Chapter 14 of the Gospel of John in which Jesus describes Heaven, saying: "In my Father's house there are many rooms ... I am going there to prepare a place for you."

"I also shared with him how in that same chapter Jesus said: 'I am the way and the truth and the life,' and I encouraged Ralph to just hang on to Jesus, thanking God that he had been forgiven, that God had a place for him in Heaven and as a result of Jesus' resurrection and His saving Grace in Ralph's life, that he had nothing to fear."

Matheson, 69, said he had met Ralph many times over the years, but it wasn't until the spring of 2011 that they grew closer.

That's when Bill Olson, a retired architect, member of the large Calgary congregation and a longtime mutual friend of both Matheson and Klein, made a startling admission.

"Bill Olson told me that he was driving down the Deerfoot past the church and Ralph pointed to the church and said, 'I've put in my will that I want Ray Matheson to do my funeral.' " 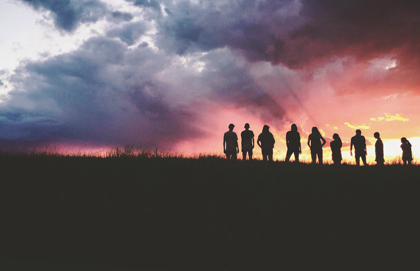 As a result, Ralph invited Matheson to his Lakeview home. Ralph's wife, Colleen, went out to do some grocery shopping during their visit and Ralph took Matheson into his den.

"I said, well, I just want to be sure that you're ready to die, that when you die you'll go to Heaven and that you'll be assured of that fact and he said, 'yes, tell me how to be sure.' "

"We talked about the way to Heaven—that it is by Grace, it isn't dependent on how good you were, or on your church attendance, or how many good deeds you've done. The Bible says it's not of good works that you are saved, but it is through recognizing that we are all sinners, that we had fallen short of God's standard and that's what Grace was—something we can't earn by our own efforts.

"And then I talked about how it was through believing that Jesus died for our sins to bring us forgiveness, that he was crucified to pay the penalty of our sins but that he rose from the dead so that we could have eternal life. And I said that God offers us a gift—it's a gift of forgiveness. It's a gift of eternal life and the gift of peace with God and that like any gift, we have to receive that gift."

Matheson says he then knocked on the coffee table in Ralph's den.

"I said, Jesus is knocking. Jesus said: 'I stand at the door and knock, if you'll hear my voice and open the door, I'll come in and we'll be friends.' "

So, Matheson led him through a prayer.

"Ralph invited Christ into his life and he seemed so very grateful and happy after that," said Matheson.

"Colleen came home shortly after that and I remember he gave her a big hug and expressed his enthusiasm for what he had done and for the sense of being forgiven."

Matheson says Klein started attending church that spring. But a few months later – in late August or early September – his pulmonary problems, caused by chronic obstructive pulmonary disease, got so bad that Ralph had to be hospitalized.

He had also by then been diagnosed with a rapidly progressing type of dementia.

"The dementia seemed to really escalate so quickly," recalls Matheson, who visited him regularly at the hospital and then at the long-term care facility in Garrison Woods."

"Sometimes he would greet me by name, he'd say 'Ray!' or he would say 'pray' but most of those times I visited he wasn't able to say very much at all and sometimes he would say nothing. But then I visited him the Tuesday before he died on Good Friday and he was so much more able to speak than he had been in such a long time." Matheson says several weeks [earlier] he told Colleen that he had plans to celebrate his wife Dee's 70th birthday in North Carolina with her siblings at a cottage there. Colleen took note of those dates.

Then after Ralph died, Matheson left numerous messages trying to connect with the busy and grieving Colleen.

By the time they connected, Colleen had made new arrangements for the private family burial, which [took] place [April 6]. Former Alberta Treasurer Jim Dinning [spoke] and an aboriginal smudge ceremony [took] place graveside as well.

"I offered to cancel my travel plans, but Colleen very graciously told me that I should go be with my wife."

Matheson, however, is grateful for the time and friendship he shared with one of Alberta's favourite sons and looks forward to seeing him again.

Born into a staunchly atheistic family, Mark Clark has built Village Church into a community of 6,000 worshippers in multiple places across Canada. The success, Clark tells Convivium’s Hannah Marazzi, springs from fostering a Gospel-rooted church for the de-churched.

"You never know what will get people's attention, what they'll react to, what will make them mad."