It is a longstanding practise for editors to commission religious stories during Holy Week. Back when Time magazine was still publishing – perhaps it still is? – Easter would be marked with the annual cover story excitedly reporting that Jesus never existed, or that His tomb had recently been found in Djibouti, or both.

This year, it was not necessary to run contrived religious stories for Holy Week; the inferno at Notre Dame de Paris provided legitimate grounds for religion news aplenty. It seems ages ago now, but it was only 10 days. Not enough time to put such a monumental catastrophe into perspective, but time enough for some early thoughts.

Amongst Notre Dame’s various gargoyles and grotesqueries, I wonder if there are any crow’s ears. Back in 2005, when St. John Paul II died, Ian Fisher of The New York Times described the late pontiff as “laid out in Clementine Hall, dressed in white and red vestments, his head covered with a white bishop’s miter and propped up on three dark gold pillows. Tucked under his left arm was the silver staff, called the crow’s ear, that he had carried in public.”

A bishop’s staff is called a “crozier” or, if you prefer the British spelling, a “crosier.” If you are a New York Times reporter covering the Vatican, you don’t know such things, and tell your readers that the Successor of Peter carries a “crow’s ear” in the manner of a pagan shaman.

The crack team at the Times was at it again last week, displaying their vast ignorance of that obscure religious sect known as Catholicism. It reported on the heroic fire chaplain, Father Jean-Marc Fournier, who raced into the burning cathedral – the “waterfalls of fire” from the roof looked to him like a vision of hell – to rescue the two most precious things in Notre Dame, the reserved Eucharist and the relic of the crown of thorns.

Catholics often refer to the Eucharist as the Blessed Sacrament. Christians of various traditions are accustomed to referring to the Eucharist as the Body of Christ, particularly when receiving Holy Communion. The Times reporter heard “Body of Christ,” and wrote up the story that the chaplain had rescued a “Statue of Jesus” from the flames, and “blessed” the cathedral with it before he ran out.  It was a moving story of courage and faith, but puzzled readers wondered what exactly a chaplain was doing carrying out an unwieldly statue, let alone managing to bless the cathedral with it.

The correction came soon enough as hoots of laughter went up on social media. It was the Blessed Sacrament, not a statue, that the chaplain rushed into save, as any priest should do if he had the chance.

The Times does not “get religion.” Its executive editor confessed as much in 2016. So it makes mistakes about the Eucharist, the holiest of holies. The New York Post helpfully compiled a list of religious howlers at the Times, including describing the Church of the Holy Sepulchre as the place where “many Christians believe Jesus is buried.” A Christian who believes that Jesus is buried anywhere is not a Christian.

The correction came soon enough as hoots of laughter went up on social media. It was the Blessed Sacrament, not a statue, that the chaplain rushed into save, as any priest should do if he had the chance.

Of course the Times was not alone. The Associated Press ran a story headlined “Tourist mecca Notre Dame also revered as a place of worship”. In fairness, the story did not make the mistake of the headline, but still did employ the odd formulation “tourist mecca”. The one thing Mecca is not is a tourist destination. Pilgrims only in Mecca. Non-Muslims are forbidden, and subject to flogging if discovered there. Not a “tourist mecca” at all.

This is a fitting occasion to recommend reading George Weigel’s 2005 book, The Cube and the Cathedral: Europe, America and Politics without God. A friend of Convivium, Weigel argued that the religious ignorance on ostentatious display last week is a threat to democratic civilizations.

He notes that the bicentennial of the French Revolution was marked in 1989 with the inauguration of La Grande Arche de la Défense, a late-20th century counterpart to the Arc de Triomphe. In the title of this book, the cube is La Grande Arche and the cathedral is Notre Dame. Weigel was struck that all the promotional material about the Arche notes that the entirety of Notre Dame – towers, spire and all – could fit into the Arche.

“Which culture, I wondered, would better protect human rights?” Weigel asks. “Which culture would more firmly secure the moral foundations of democracy? The culture that built this stunning, rational, angular, geometrically precise but essentially featureless cube? Or the culture that produced the vaulting and bosses, the gargoyles and flying buttresses, the nooks and crannies, the asymmetries and holy ‘unsameness’ of Notre-Dame and the other great cathedrals of Europe?”

We are about to see those two cultures, that of the empty cube and the abundantly-filled cathedral, clash. Notre Dame must now be rebuilt. According to what principles? What vision? 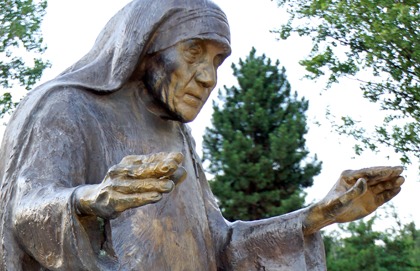 Notre Dame belongs to the French Republic, which stole all historic churches during one of its periodic outbursts of totalitarianism. It allows the Archdiocese of Paris free use of the building, though the Church has to pay for the upkeep.

President Emmanuel Macron announced that Notre Dame will be rebuilt in five years, in time apparently for the Olympics, to be held in Paris in 2024. Why that should matter is not clear, given that the spire – one of the most recent additions to Notre Dame – itself is older than the modern Olympic Games. The Church that originally built Notre Dame was a little more patient.

Within hours of the fire, France’s billionaires pledged contributions to the rebuilding efforts; the first was for 100 million euros, the second for twice that. Within days nearly more than $1 billion Canadian had been pledged.

The criticism came just as quickly. Some objected that individuals ought not to control such wealth. Others said that they should not spend it on a church but on the poor, or perhaps climate change. It is not a new objection.

The fire at Notre Dame broke out during an evening Mass on Monday of Holy Week. The Gospel passage read at that Mass was from John 12:

Mary took a litre of costly perfumed oil made from genuine aromatic nard and anointed the feet of Jesus and dried them with her hair; the house was filled with the fragrance of the oil.

Then Judas the Iscariot, one of his disciples, and the one who would betray him, said, “Why was this oil not sold for three hundred days’ wages and given to the poor?”

He said this not because he cared about the poor but because he was a thief and held the money bag and used to steal the contributions.

The building of churches, open to all, is actually one thing the rich can spend money on that does benefit the poor.

So Jesus said, “Leave her alone. Let her keep this for the day of my burial. You always have the poor with you, but you do not always have me.”

The building of churches, open to all, is actually one thing the rich can spend money on that does benefit the poor. When they build billion-dollar stadiums, or elegant concert halls, or order a luxury yacht, the poor have no place there. But step into any cathedral in the downtown of any city, and the poor, the lonely, the mentally disturbed, take their place alongside everyone else.

In 2011, I wrote about that for Toronto’s Catholic Register, contrasting the funerals of Jack Layton, held at Roy Thomson Hall, and Cardinal Aloysius Ambrozic, held at St. Michael’s Cathedral:

A few days after Jack Layton was feted at Roy Thomson Hall, the funeral Mass for Cardinal Aloysius Ambrozic was offered at St. Michael’s Cathedral. The difference was like black and white.

In the concert hall, the Reverend Brent Hawkes and others went on at great length about carrying forth Mr. Layton’s vision of an “inclusive” social movement. And the massed ranks of the proudly progressive stood and applauded lustily, all the while patting themselves on the back for their broad-mindedness – which is anatomically hard to do at the same time, but the spirit of the occasion demanded it.

It was striking how monochrome the massed ranks of the progressives were. As the camera panned the crowd at Roy Thomson Hall, it was a sea of almost exclusively white faces. That does not suggest that Mr. Layton had racial biases – after all, his widow is a Chinese Canadian. It is a tedious thing to be counting up the various hues in any crowd, except that when a series of white speakers prattle on about how splendidly inclusive they are, it is of passing interest that they do so in the playground of the wealthy – Roy Thomson Hall – and to an audience nearly as lily-white as those on stage.

Yes, the crowd at Roy Thomson Hall did not much look like the city of Toronto…

Over at St. Michael’s Cathedral, it was a different scene. To begin with, the Cardinal himself was a Slovenian immigrant who made his way to Canada by way of displaced persons’ camps after the Second World War. Unlike Mr. Layton, his father was not a cabinet minister, nor was he a son of privilege. And inside the cathedral, well – it looked like Toronto, with people of many different races all mixing together, including among the priests, a rather more diverse lot than, say, the federal NDP caucus.

Roy Thomson Hall is not open to the public day by day, except to those affluent enough to afford tickets. At St. Michael’s you can drop in at any time of day and find ordinary people, from the rich to the dispossessed, men and women from every corner of the earth, the gifted professor and the mentally ill. It’s been like that at every cathedral I have ever visited. If you want a social movement that is truly “inclusive”, the Catholic Church is not a bad place to start.

Notre Dame has been that for more than eight centuries. It should be rebuilt with that in mind.

An eclectic roundup of incidents, events and oddities that catch our editor's eye.

An eclectic roundup of incidents, events and oddities that catch our Editor's eye.