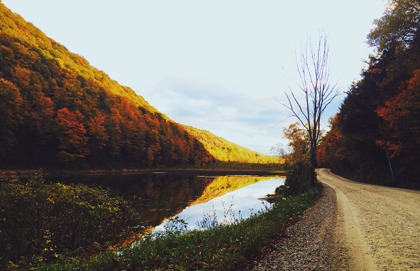 Marvel and Wonder in October November 1, 2012  |  By Brian Dijkema
Print

You hear them coming every week; usually on a Sunday night, but often very, very early on Monday morning. They come rain or shine. And in the fall, when the whole world seems to be headed for some sort of cold and sodden dormancy, it rains a lot. And yet they still come clinking along. Often they're pushing stolen shopping carts, pulling massive suitcases on wheels, grocery buggies lined with garbage bags, or cycling with some hacked contraption of a trailer which enables them to move from recycling bin to recycling bin faster than those on foot.

It's unsettling to see people rummage through the blue boxes on your street in search of the discarded bottle which will give them ten or twenty more cents to add to their revenue stream. I recall one particular morning in October 2004. For some reason known only to God I was up at 4 a.m. and glanced outside to check the weather. It was cold, damp and windy: the type of weather where even the light from the street lamps seems too cold and tired to light the street.

When I looked out, I noticed a gentleman in a plaid hunting fleece and ball cap, pulling one of those wire grocery carts, collecting bottles and cans. I watched him for a while, I don't know why. And then, on a day when the only thing anyone should consume is hot tea, I watched the gentlemen reach down into the blue box in front of our apartment and pull out one of the cans of Old Milwaukee that our heroin-addict neighbour discarded, probably after using it as an ash tray. He picked it up, hefted it, and paused. He then proceeded to lift the tall boy to his lips and quaff the thing. He didn't flinch. Then he put the can in his cart and headed on down the road. I saw him again later that morning as I waited for the bus; still on his route, diligently working towards the goal of earning enough revenue to pay for the Colt 45 which would ease his anxiety once Dundurn's Beer Store opened at 10 a.m. I never learned his name.

Today there is a different person—a lady—who runs our street. I know her name. She's polite, dignified, and works extremely hard. In fact, all of these folks—my friend calls them street entrepreneurs—exhibit these qualities. They're up early, they're on time, their routes are planned like clock-work, and they execute with the efficiency of Henry Ford. They do business development and are always careful never to lose a customer by being rude or aggressive. That they do this while bearing the obvious marks of abuse and sadness, not to mention the burden of their addictions, causes me to marvel and wonder. I marvel that, even in the midst of the long loneliness that many of these street entrepreneurs are immersed in, they exhibit a dignity—no, a reflection of God—that comes from doing work, and doing it well. And I wonder how it comes to be that their addiction, sadness and poverty, and not their will, consents to end such skillful work at 10:05 a.m. on Monday mornings.