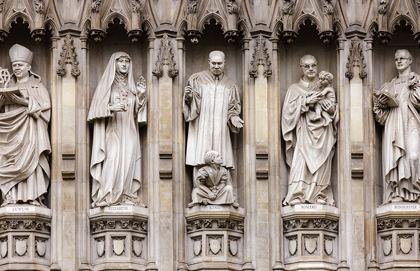 Archbishop Oscar Romero, the archbishop of San Salvador who was assassinated in 1984, will be soon canonized a Catholic saint. The news came from the Vatican last week, but Romero had already been on my mind.

My last visit to Westminster Abbey was more than 20 years ago. It’s an ambiguous place for a Catholic. A great abbey of more than a thousand years standing, it was seized by the Crown in, as the English might say, the unpleasantness of the 16th century. The Church of England ensures that, even though the Abbey is often entered as more of a museum or tourist attraction, it still functions as a place where God is worshipped daily. I went along for Evensong, a great treasure the Anglicans have given to Christian worship and culture.

And upon entering the west door of the abbey I was struck by the 10 statues over the door commemorating the Christian martyrs of the 20th century. The Anglicans now take a broader view of martyrdom than they did in the 16th century, even honouring Catholic martyrs who died under Henry VIII.

(At the 2014 funeral of Jim Flaherty at St. James Anglican Cathedral in Toronto, I took along my priestly stole with the images of St. John Fisher and St. Thomas More on it. Flaherty had kept a picture of Thomas More, patron saint of statesmen, in his office. I indicated to the presiding Anglican clergy that I would not wear it if it would cause discomfort, but was told enthusiastically that, to the contrary, they would be pleased.)

I had not seen the martyrs’ statues before. They were installed on the west front 20 years ago, in 1998, as part of a decades-long renewal of the Abbey. They were carefully selected to represent the greatest century of Christian martyrdom in history. The guide lists them thus:

The ten representative statues are intended to represent all those who have died in circumstances of oppression and persecution and are drawn from every continent and many Christian denominations: Maximilian Kolbe from Poland, Manche Masemola from South Africa, Janani Luwum from Uganda, Grand Duchess Elizabeth of Russia, Martin Luther King Jr. from the USA, Oscar Romero from El Salvador, Dietrich Bonhoeffer from Germany, Esther John from Pakistan, Lucian Tapiedi from Papua New Guinea and Wang Zhiming from China.

It’s immensely moving to read their stories. Maximilian Kolbe has already been canonized by the Catholic Church, and I have visited several times the Auschwitz cell where he was murdered by lethal injection after he did not starve to death quickly enough. I take him a special patron, as he was a priest journalist long before Auschwitz – and his baptismal name was Raymond.

Now Romero, too, will be canonized. During the civil war in El Salvador, Archbishop Romero spoke courageously against human rights abuses by government forces, and stood boldly in solidarity with the poor. Many priests suffered persecution by the government. On March 23, 1980, Archbishop Romero called upon the armed forces to ignore the orders of the government to imprison and kill those who spoke out in favour of the poor and of human rights.

During the civil war in El Salvador, Archbishop Romero spoke courageously against human rights abuses by government forces, and stood boldly in solidarity with the poor.

The next day, Archbishop Romero offered the Holy Mass in the chapel of a Catholic hospital. In his homily, he preached:

… those who surrender to the service of the poor through love of Christ, will live like the grain of wheat that dies. It only apparently dies. If it were not to die, it would remain a solitary grain.  The harvest comes because of the grain that dies… We know that every effort to improve society, above all when society is so full of injustice and sin, is an effort that God blesses, that God wants, that God demands of us.

After finishing the homily at pulpit, he returned to the altar. He was shot dead by a government death squad, killed while offering the Holy Mass.

At his funeral a few days later – which brought hundreds of thousands to the streets around the cathedral of San Salvador – more violence broke out, disrupting the funeral and causing casualties. The tomb of Archbishop Romero, a man killed by violence and buried amid violence, immediately became a place of pilgrimage for those praying for peace and justice in the most beautifully named country in the world, El Salvador – The Saviour. 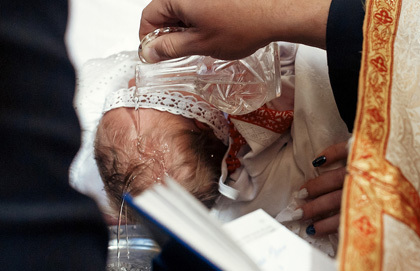 The heroic life and martyr’s death of Oscar Romero were immediately recognized. Saint John Paul opened the cause for sainthood in 1997. Closer to home, in 1999, Father Thomas Rosica, then-chaplain of the Newman Centre at the University of Toronto, included a stained glass window of Archbishop Romero in a new series of windows for the chapel.

Yet it was the Anglicans who gave to Romero a special, intense and immediate devotion. He was killed on March 24, 1980. The next day, Robert Runcie was being installed at Canterbury Cathedral as the new Archbishop of Canterbury. Upon hearing the news, he modified the ceremony so that he stopped at the spot in the cathedral where the king’s agents had killed St. Thomas Becket 800 years before. Runcie prayed there for the soul of Oscar Romero.

Last fall, to mark the centenary of Romero’s birth, a special ecumenical Evensong was held at Westminster Abbey.

The Archbishop of Canterbury, along with the Catholic archbishop of Westminster, Cardinal Vincent Nichols, jointly marked the centenary. The most moving part of the ceremony was the premiere of an anthem commissioned for the occasion.

James MacMillan set the following words, taken from Archbishop Romero’s preaching the day before the assassination, together with Psalm 31:

I would like to make a special appeal to the men of the army. Brothers, each one of you is one of us. We are all the same people. Before any order to kill a man may give, God’s law must prevail—‘Thou shalt not kill’.

For I hear the whispering of many— terror all around! — as they scheme together against me, as they plot to take my life. But I trust in you, O Lord; I say, ‘You are my God.’

Romero and his companions represent the vast number of martyrs of our time. At the same time, Romero’s death links him with those courageous bishops through history who were killed by the state.
Subscribe to our weekly newsletter and never miss another one.
Sign-Up Now

The martyrs of Westminster Abbey are not only Catholic, of course. Dietrich Bonhoeffer and Martin Luther King Jr. are included.

The Anglican Archbishop of Uganda, Rwanda, Burundi and Boga-Zaire, Janani Luwum, was killed by Idi Amin in 1976, after Anglicans, Catholics and Muslims protested the cruel violence of Amin’s security services. His last recorded words: “They are going to kill me. I am not afraid.”

Wang Zhiming was ordained a Protestant pastor in Wuding, China. During Mao’s Cultural Revolution, Christians were fiercely persecuted. Zhiming was executed in 1973 in front of a mass rally of 10,000 people. His wife and son were imprisoned. In 1980, the Chinese communists “rehabilitated” Zhiming and offered his family compensation for his murder. Today in Wuding there are more than 100 places or worship and about 30,000 Christians.

Lucian Tapiedi was born in Papua New Guinea to a father who was a sorcerer. After his father’s death, Tapiedi was educated at mission schools and became in time a teacher and Christian evangelist at those same Anglican schools. In 1942, the Japanese invaded Papua New Guinea and began their brutal occupation. Tapiedi sought refuge with an indigenous tribe, one of whose members killed him. Six of Tapiedi’s companions were beheaded on a beach by the Japanese. There is now a shrine marking the place where Tapiedi was martyred. His killer converted to Christianity, took the name Lucian, and built a church in honour of the martyr he killed.

Manche Masemola was born in the Transvaal (South Africa) in 1913. As a girl she became fascinated with the preaching of an Anglican missionary, Fr. Augustine Moeka. She began to prepare for baptism, against the wishes of her parents. They beat her, and took her to a traditional shaman, claiming that she had been bewitched. Manche was determined to be baptized, though. Her parents would not accept her choice. They killed her on  Feb. 4, 1928. She was martyred before she could be baptized, but said beforehand she would be baptized by her own blood.

She was not sacramentally baptized, but her own mother was, in 1969. Pilgrimages were made to her grave since the 1930s, and in 1975 her name was added to the calendar of the saints in the Anglican Province of Southern Africa.

Romero and his companions represent the vast number of martyrs of our time. At the same time, Romero’s death links him with those courageous bishops through history who were killed by the state. St. John Fisher himself comes immediately to mind. Along with St. Thomas Becket, one also think of St. Stanislaw of Kraków, killed by agents of the Polish king at the altar in 1079. What happened to Romero links us to our blood-stained and blood-seeded history, from John the Baptist onward.

The Anglican Communion does not have the formal canonization process that the Catholic Church does. But the statue in Westminster Abbey is something like that, as was the service last fall. And it is a happy thing that the formal Catholic process now agrees.