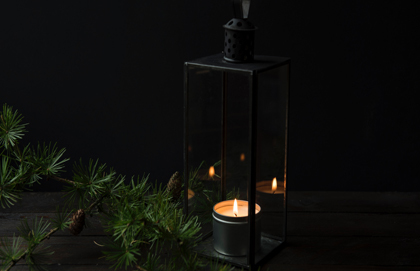 This Thursday is Thanksgiving down here in the U.S., and that signals the start of Christmas season—and the season of Advent, the beginning of the church calendar.

Though I grew up in a church that did light the candles in the Advent wreath on the Sundays leading up to Christmas, I didn't really understand the significance of the season until a few years ago. And so I've grown into the season since then. A few years ago, I posted this on another blog, and I think it merits repeating:

. . . I don't think I had any idea that Advent wasn't just an excuse for timing when you could start singing Christmas carols at church, or for judging when you were finally allowed to put up the Christmas lights. It was only when I became an adult that I recognized that Christians around the world have celebrated Advent for centuries, even when Christmas was not the tinsely affair celebrated by the entire culture that it is today.

The Advent season—or, as we often call it in our culture, the Christmas season—is, indeed a time of longing. But the other function of Advent, which I only really learned about last year, is to practice restraint. Orthodox churches practice a fast, much like a Lenten fast, during Advent, and some Western churches do as well. Practicing restraint is emphatically not encouraged in most homes—Christian or otherwise—during Advent (unless you're an avid reader of dieting magazines). The "Christmas season" is designed for excess: excessive decoration, excessive parties, excessive food (especially sugar), excessive spending.

There's nothing wrong with occasional excess, in and of itself. In one of my favourite books, The Supper of the Lamb, Episcopal priest Robert Farrar Capon points out that the world, itself, is an excess perpetuated by God. The beautiful but undeniable uselessness, from a pragmatic perspective, of much of creation points toward God's love of beauty, of the purely aesthetic. He says the world is "the orange peel hung on God's chandelier . . . He likes it; therefore, it stays."

But (as Father Capon also says frequently in his book) excess is only good if we have something to compare it to. Celebration in this world can only be a taste of what is to come in the resurrection; a grand and sumptuous supper makes us long for the final, unending Supper. But if we only practice excess, we come to deprive others of their needs.

This is a tough concept for us Westerners, who can eat what we want, pretty much when we want it, buy something on credit if we need or want it badly enough, and rarely have to spend long periods of time with our desires unfulfilled. Fasting is a way for us to better appreciate the fulfilled desires through restraining ourselves. It's a lot like when you were a child and asked your parents why it couldn't be Christmas every day. The answer was not because Christmas is bad for us. It's because if Christmas were every day, we wouldn't appreciate it. We would grow weary of it. The magic would be gone.