What do (1) Prostitution, (2) Assisted Suicide, (3) Beer and (4) an Evangelical Christian University have in common?

Even if you stare hard at the question, you might not get that all are connected by the ancient legal principle known by its Latin name stare decisis. The vast majority of Canadians have likely never heard of it, yet it’s been a critical common element in three crucial Supreme Court rulings over the past five years.

In explaining why it was appropriate for the lower courts to do so, the Supreme Court stated that if “new legal issues are raised,” or if there is a “change in the circumstances or evidence that fundamentally shifts the parameters of the debate,” binding precedent might not be binding at all:

[42] In my view, a trial judge can consider and decide arguments based on Charter provisions that were not raised in the earlier case; this constitutes a new legal issue. Similarly, the matter may be revisited if new legal issues are raised as a consequence of significant developments in the law, or if there is a change in the circumstances or evidence that fundamentally shifts the parameters of the debate.

In Canada, our legal system is one of Common Law. “Common Law” means that rather than operating solely on legislation, where all law is codified (Quebec is a civil law jurisdiction using a Civil Code for provincial matters), our legal system is developed by and operates through decisions or case law made by judges, courts, arbitrators and tribunals.

To maintain order, Common Law holds to a very important legal principle called stare decisis, which comes from the Latin phrase “Stare decisis et non quieta movere,” meaning “to stand by decisions and not disturb the undisturbed.” In simple terms, it means that earlier decisions are used as precedents to be used in future similar cases. A basic tenet of stare decisis is that lower courts cannot overturn a precedent by a higher court….

Because of stare decisis, lawyers can for example, (or could prior to Bedford) counsel clients with confidence on cases and issues which had already been decided by the courts. Again, the notion of stare decisis exists to create order, coherence and certainty in our legal system. I am convinced one of the consequences of the Bedford decision will be a turning of this legal principle on its head. There will be a checkerboard of decisions by lower courts across the country overturning decisions of the Supreme Court of Canada until the facts establish a case in which the Supreme Court can make a course correction. 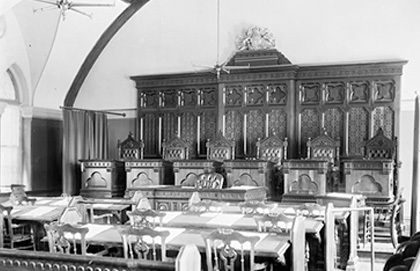 A Court of Many Colours
A Wall Between Church and Court
Challenging Trinity Western University: When the Law is Inconvenient

And now comes R. v. Comeau, a decision released last week that has become known colloquially as the “Free the Beer” case. In Comeau, a New Brunswick man was charged with violating provincial law banning the possession of alcohol purchased from outside of New Brunswick. In defending the charges, Comeau argued that the law in question violated the Constitution’s free trade guarantee that prohibits provincial tariffs on Canadian goods within Canada. He was successful at the trial and appellate level, and New Brunswick appealed to the Supreme Court.

[34] To reiterate: departing from vertical stare decisis on the basis of new evidence is not a question of disagreement or interpretation. For a binding precedent from a higher court to be cast aside on the basis of new evidence, the new evidence must “fundamentally shif[t]” how jurists understand the legal question at issue. It is not enough to find that an alternate perspective on existing evidence might change how jurists would answer the same legal question.

This, to me, is the Supreme Court trying to put the genie back in the box. And that is a good thing because putting the genie back in the box restores order to our legal system. It may also be a sign of what else is coming from the Court. And this is where the fourth part of the question at the beginning this piece comes in: the Evangelical Christian University.

In 2001, the Court ruled in Trinity Western University v. British Columbia College of Teachers that the British Columbia College of Teachers had no legal justification for refusing to accredit Trinity Western University’s (“TWU”) graduates on the basis of TWU's Community Covenant. By signing the Covenant, students commit to abstaining from certain activities and behaviours during their studies including the viewing of pornography, the possession or use of alcohol on campus, and sexual intimacy that violates the sacredness of marriage between a man and a woman.

In 2001, the Court found no evidence that TWU students who had signed and abided by the Community Covenant demonstrated any discriminatory behaviour in the exercising of their duties as teaching professionals.

Fast forward to 2014 when the Law Society of Upper Canada, the legal regulator in Ontario, voted to refuse to accredit graduates of TWU’s proposed law school. Similar votes were made by the law societies in Nova Scotia and British Columbia. The reason for their rejection of TWU’s graduates? TWU’s Community Covenant and, more specifically, the pledge to abstain from sexual intimacy outside of the confines of a biblical marriage between one man and one woman. Sounds familiar, right?

Comeau is, I’m hopeful, a sign that the Supreme Court is taking back its ultimate authority and restoring the principle of stare decisis.

And that’s why the Comeau decision is encouraging to me. As someone who lives in a city that straddles the Quebec border, where beer is significantly cheaper, the Comeau decision is a disappointment. But as someone who has been advocating for TWU’s law school and for the rule of law in that regard, it strikes me that it may be a sign of what is to come in the TWU litigation.

Comeau is, I’m hopeful, a sign that the Supreme Court is taking back its ultimate authority and restoring the principle of stare decisis.

If that’s the case, it bodes well for the coming decision involving TWU.

A Wall Between Church and Court

Convivium contributor Janet Epp Buckingham explains this week’s unusual Wall case in which the Supreme Court said judges have no business telling churches how to decide who belongs. It’s a positive outcome for religious freedom, she says, though less far-reaching than other anticipated rulings will be.

Challenging Trinity Western University: When the Law is Inconvenient

So, in this case, the Court of Appeal of Nova Scotia was being asked to consider whether the Nova Scotia Barristers’ Society (the “NSBS”) acted properly and within its authority in refusing to recognize law degrees from TWU because of the latter’s view and position on marriage and sexuality, just li...