“When you homeless, you don’t wanna hear much of that, cause it’s like, when you get through talking about Jesus, I gotta go back to living in this empty building, you know?"

- Mitch Albom, Have a Little Faith

Last year, I was offered the opportunity to help out at a church-funded drop-in centre located in downtown Ottawa. Through my time spent with the community, God invited me to humbly walk alongside its members in some hard, deep pits of brokenness. He turned the moments into opportunities to unveil the brokenness and replace it with the comfort and healing of His presence.

How ironic that an opportunity which I entered to “serve” became a community that served me. It gave me an opportunity to have a fuller glimpse of God’s grace and character.

When I first started going, there were multiple times that the replay of conversations in my head in the silence of my walk home would push me to recognize the bitter realities of their situations and I would unconsciously start to cry. These interactions forced to the front of my mind questions I had already been struggling with. They are questions that I think are very common for people to ask:

Why does he have to be in this situation?

The day I went back, Pat was there. I was catching up with other people. He entered into the room, and stopped.

What did I do to avoid being born like that?

There was a man I befriended throughout my time there who suffered from multiple mental health diagnoses. Pat’s a rough guy, with long hair, a long curly beard and a lip ring. He’d come in, take his coffee, eat his sandwich and sit alone. He’d always forget my name but after about three months of introducing myself anew each week to him, a friendship slowly started to form and he started to share his thoughts.

He would ramble often, making it difficult, sometimes overwhelming, to follow him. He was incredibly smart, but often could not connect his multitude of unrelated thoughts like philosophers (his favorites were Nietzsche and Sartre) to his ideas on Asian history and political science. His own ideas would somehow always trigger in the idea of God and how that Being doesn’t make sense and we are all doomed and God cannot save us.

His brain was wild, unruly, and complicated, but slowly I started to understand his thought process and how quickly his brain switched topics. In my first 8 months, I soon discovered key words like “control, grace, pain, life” would turn a switch for his thought process to veer towards God.

He didn’t like to hear about God. He liked to talk about God, though. As a volunteer, I was asked to not talk about this topic with the community members unless they did. Pat brought it up quite enough that I could never break the rule anyways. He’d explain to me over and over again how God was an omniscient being who controls everything, giving and taking what he wants, leaving humanity in their own disasters and pits of sadness. To him, it was unfair.

Why would an “all-giving” God take things away? Why would a preached “ever good” God leave him in his current situation, ruin his friendships and family relationships and not allow his doctor to give him the medication that he needs? If this God was “only good” why was he in this deep pit? It didn’t make sense to him. I would sit and listen to him assert his anger against God, and let him tell me what he believed - partly because he had no intention of listening to me.

The reality was though, he physically and mentally couldn’t. His attention span was limited to 30 seconds no matter the topic of discussion. During these conversations, I slowly discovered that his rambles were an invitation, his interruptions of me (or himself) was God’s way of inviting me to witness his presence within the redirections of the conversation.

Pat took particular interest in one of my political philosophy classes. For one of my papers, he helped me decide on the topic and was excited for me to read to him the finished piece. The morning we agreed I’d bring it and read to him, he rolled in late, eyes glazed, smelling of weed. I’ve never seen him come in high before.

I read for about a minute and he just kept looking down or all over instead of at me. I stopped. I asked if he was high. He looked down and didn’t respond.

I asked if he wanted to try the next week, and he agreed.

“I promise I won’t be like this next week,” he said.

The next week he came on time, right when the doors opened. 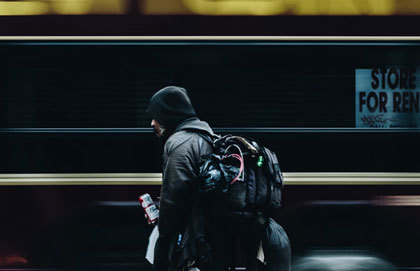 Faith Among the Seconds
Salvation By The Young

He sat still and gave me his undivided attention for the entire time I read my paper to him. It was the longest I had ever spoken to him non-stop in conversation.

It was three minutes.

Later, he came back rambling pretty loud with his head down and eyes sunken. I’d had enough interactions to be able to tell if it would be a ‘good’ day or a ‘bad’ day, and was usually able to predict the topics he’d talk about. Bad days consisted of major allegations and heartbreak spillings about God tied in with his family stories. Good days would be political philosophy debates with random spurts and facts on the history of civilization. Today was a bad day.

When he came in, he immediately began talking about his relationship with his mother. The phone calls, their exchanges, and how she made him feel inferior. As he continued to share, he became increasingly anxious to the point where I was starting to become uncomfortable and could not predict his behavior.

He was agitated, erratic, talking and swearing loudly, gesticulating with his hands. Others were starting to stare, which I knew he would not like. I asked him to come with me, hoping, praying that doing a puzzle would ease him.

We tried anyway but it didn’t go well. I suck at doing puzzles. I was glad he didn’t have his glasses. Then I began to hum. Hymns. Amazing Grace, It is Well, How Great Thou Art. Me humming. Him sitting beside me, watching.

“This is nice. Continue,” he said.

Until I left, he sat beside me quiet and still for the entire time, listening. We sat there together for at least 15 minutes.

Pat was a reminder. He had no intention of listening to me, or changing his mind. And I don’t think he physically could.

Our normal conversations usually went from one philosopher to another until God burst into the conversation as Pat bashed the idea of a higher being in control.

There were many times when I tried to explain the story of a kind and patient God who cares for him deeply. My efforts would usually end in me just saying the word “God” or “Jesus” because of how sensitive he was to the topic. He’d then cling to that idea of God within humanity and ramble about how it is impossible for a man to be God. How does it make sense for God to put all his power in a mortal man and then give up all His power, because if He was all powerful, wouldn’t He want to keep his power?

Finally I said: “The Gospel is about grace, Pat. It’s not just about a man dying.”

I realized he was asking.

“You actually want to know?” I asked.

I’d stop every couple of sentences to ask him if it made sense. I could tell that he was attentive because he wasn’t blinking or interrupting. He just stared and listened. He listened for five minutes straight about Jesus’ grace and love for him. How loved and worthy he was.

Due to other commitments I was unable to visit the community for more than six months. The day I went back, Pat was there. I was catching up with other people. He entered into the room, and stopped.

Before I could even say anything or stand up, he had already bent down and lightly hugged me, my face right next to his. This 32-year-old man, dirt in his hair and fingernails, hollow eyes, who could not remember, remembered me. He remembered I was in school and remembered where I was from. And he hugged me. This rough, broken man valued me and I had done nothing to deserve that value.

He remembered who I was after over six months.

I’ve discovered that once we start paying more attention to the people around us, God’s presence tends to show up within the interactions, in subtle, simple miracles. Likewise, through Jesus, God’s power was witnessed through the miracles that he performed, but it wasn’t the miracles themselves that were the point. It was the teaching. The point of Jesus wasn’t a way of showing off God’s great deeds and power. Instead, God humbly put his power into a human being to remind us that He cares, and that He knows. He knows the pain, he knows the dirt, and he knows the pit. He’s been in it. And He’s with us in it.

Through my interactions with Pat, God graciously showed me that He’s in the dirt. He’s in the pit of brokenness, of sadness, and pain with them. He’s with us.

Pat was a reminder. He had no intention of listening to me, or changing his mind. And I don’t think he physically could. His social, mental and health limitations inhibited his willingness and ability to listen, receive, and understand. What he wanted, what he needed, was for people to listen to him. But he did listen. He remembered me. This was a man who didn’t want to listen, and arguably couldn’t listen, but who remembered our conversations and interactions centered on Jesus, whom he supposedly detested.

Pat’s stories were humbling, but what was even more so was experiencing the reality of God’s presence through his stories of brokenness. He used hard stories and the simple act of listening to play a part in providing comfort, and to portray the reality of His care to a man struggling in his own pit.

I’m not a theological expert. The questions above are still questions that I wrestle with and pray about. Pain and confusion is still an emotional reality that must be confronted. For many people, it’s daily. But maybe within that struggle, God shows up and is with us, quietly, not in a clanging way, but in a humble subtle way, through humming, through 30 second windows.

Faith Among the Seconds

Through often painful moments listening to a broken man at an Ottawa drop-in centre, Joyce Deng began to hear God’s voice in the briefest of encounters.