Over two decades ago, Jesus appeared on Cape Breton Island. Or rather, his face materialized on the side of a Tim Hortons in Bras D’Or.

The spectacle drew huge crowds (at times larger than the population of Bras D’Or). They jammed the Tim’s parking lot as well as that of the restaurant next door. Cars stopped along the highway, spectators brought lawn chairs and sat in the parking lot for hours. Then, an employee replaced some exterior light bulbs and the image of Jesus was gone. The crowds dispersed as quickly as they had appeared.

This all took place over a week.

Inspired by these true events, Canadian playwright Josh MacDonald wrote the play Halo. Set in a fictitious Maritime town, the play draws on the spectacle to build stories around the event and the questions it raises. During my short-lived theatrical endeavors in high school, I was part of a production of Halo—so I was excited to sit in the audience 10 years later to see 9th Hour Theatre Company’s production last evening. 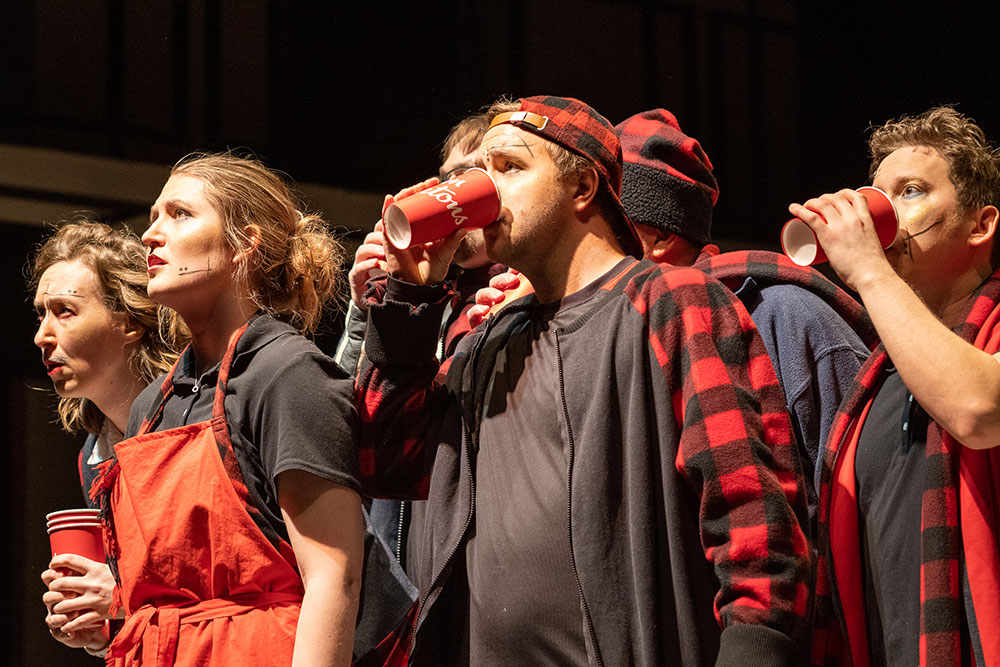 This little play you likely haven’t heard of nails the questions that bizarre (or miraculous) happenstances force the faithful and non-faithful alike to confront. We hear about “miracles” all the time. A lot of us are pretty skeptical of miracles until we need one.

While the image of Jesus brings spectators and a flurry of confusion and consternation (as well as spiking coffee sales), another plotline in Halo brings home the tension between miracles, hoaxes, and the faith that spans them: healing for the sick. 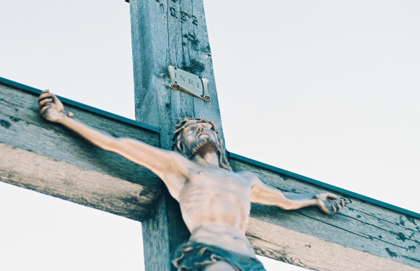 One local man’s daughter, Meg, has been comatose since an accident. Typically, she is portrayed as a character on stage: a silent body in a hospital bed. (My own high school was so leery of any teenaged thespian’s ability to stay still for 100 minutes that they used a mannequin. This turned out to be a poor decision when we had to try to remain serious while holding its hand and delivering monologues to it). 9th Hour decided to place her off-stage. Actors come downstage and gaze straight into the audience to address her.

The actors also address the brick wall with the image of Jesus the same way: downstage and into the imaginary fourth wall. The parallel intangible presence of Jesus’ image and Meg knits together the questions they both evoke: Can you hear me? Did I see you move? Will you reply?

“The way you talk it’s almost like you think she’ll answer,” Meg’s sister notes to her father at the side of Meg’s hospital bed.

Can the image of Jesus, looking the way we think he looked with long robes and sweeping locks, mean or do anything when it appears on a Canadian doughnut shop? As disgruntled Tim’s employee Casey—one of the play’s cynics—points out, these sorts of miraculous appearances do tend to appear in trailer parks and not the floor of the UN General Assembly. Is Jesus appearing where we need him, or are we putting him where we want to encounter him?

In the play’s lighter moments, when the ensemble mimes mass with Timbits and dark roast, Halo shows us how desperately we need our daily faith to mean something.

Early in the play, Casey describes how she sometimes stands in the circle of the highway on-ramp, which she says could “take me home if I just follow it.” There’s something aching about the feeling of trying to get somewhere—or something—but being powerless to do so.

Sometimes miracles happen. But sometimes the sick stay sick. In the play’s lighter moments, when the ensemble mimes mass with Timbits and dark roast, Halo shows us how desperately we need our daily faith to mean something.

That Tim Hortons from the true story was torn down four years ago. A gleeful CBC article reports that, when asked whether the “Jesus bricks” were set aside or simply gone, the Tim Hortons staff replied, “God knows.”

It’s not really about the bricks though, is it? Wasn’t it a trick of the light, corrected by a few light bulbs? 9th Hour brilliantly pulls their own trick of light in Halo, illuminating an unassuming ring of grey brick flooring a bright white just before the final blackout. A halo, right where they’d been standing and pacing and questioning this whole time.

Halo is playing at Centrepointe Theatre in Ottawa until March 15, 2020.

The glories of Renaissance painting have given us an image of Jesus at odds with the Saviour who walked beside the poor and dispossessed, writes Convivium contributor Keith Dow.

People of faith pursue God, but gospel musician Brooke Nicholls reminds us in this Convivium interview that God also pursues His people. The meeting place between them, the Chatham Ontario native tells Hannah Marazzi, is invariably touched by beautiful song.