In a not-so-recent, cage-rattling post for The New York Review of Books, Tim Parks ruffled some literati feathers, I'm sure, with his unequivocal argument that the world does not need stories. And he's not just talking Tolstoy or Trollope. If he were, it would be a lot easier to relegate this piece to the resting place for tired arguments, that place where dead horses are continuously beaten. But no, his criticism digs deep in an attempt to expose the foundation of stories as a sham—a delightful sham, but a sham nonetheless.

Using Salman Rushdie's Haroun and the Sea of Stories as his starting point, Parks takes to task any simplistic notion that "fiction is on the side of freedom." Contrary to our common sense, Parks notices a curious attraction to Rushdie's idea that "all the different stories of the world flow together in a great ocean of narrative." He points out—and I would say he is right here—that "far from flowing together in a harmonious ecology, stories tend to be in constant competition with each other. Far from imposing silence, cults, religions, and ideologies of all kinds have their own noisy stories to tell." Again, this is no diatribe against Dickens or Dostoevsky. This goes much deeper and is an argument that hews roots not branches. Parks is dealing with Myths, those overarching narratives which help to orient us in our time and place and out of which flow the lifeblood of stories in novels, epic poems, or even sitcoms.

Simply listen to the cacophony of stories in our world though and you'll soon hear the discord that disturbs members within the same tribe (e.g. Christianity with its 16,000 denominations) and members from separate tribes (e.g. conflicts between Israelis and Palestinians). But cacophony does not always mean chaos and it does not necessarily mean there is not something more deeply beautiful that can still be heard. 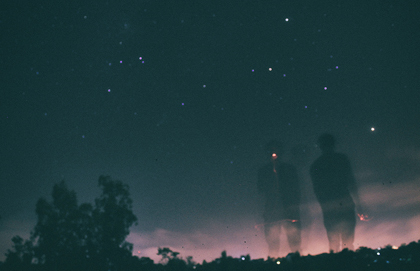 The New Scientism: Still Fighting the Phantom War
Beyond The Way Things Are
Dispensing in "Unsuperfluous Even Proportion"

Parks lays his cards on the table when he reveals a deep-seated suspicion towards any "preacher and polemicist [who] want us to accept just one, mutually exclusive set of stories, one vision, which we must believe is true." And the reason Parks is suspicious of such storytellers is due to his low opinion of most readers: "People tend to use stories of whatever kind to bolster their beliefs, not to question them." Parks reiterates this suspicion of authors and distrust towards good readers a few paragraphs later: "[S]tories compete for our assent and seek to seduce us to the author's point of view. ... Rather than needing stories, we need to learn how to smell out their drift and resist them."

Parks' underlying presupposition is that the only truth that exists is the truth that is made by the author and, in turn, the pieces of that truth that are chosen by the reader and, in turn, made into some coherent narrative they can use. Truth here simply coheres for the individual in order for them to make their lives a temporary stay against confusion. There is a lot of good in this claim, and a lot compatible with Christian understanding of epistemology and creatureliness—or so I'm beginning to realize the more I read Jamie Smith's latest, Who's Afraid of Relativism.

Yet making meaning through reading, Parks claims, "suggests our anxiety; the more words we invent, the more we feel reassured that there really is something there to refer to." For Parks then, reading becomes an unnecessary "intensification of self," a fortification of prejudices, desires, and beliefs that keep individuals in perpetual, albeit futile, competition with others. And while I think there is a lot of good in Parks' pragmatic account, I couldn't disagree more with this final assessment. We need to find a balance between resistance and assent.

But if, in Parks' opinion, the best that Story can do is intensify the self with comforting illusions, it's no wonder he attempts to free himself from such "enslavement." If Stories always mask an individual's or a group's bid for power and control, the reader must resist and enact a hermeneutic of suspicion if they are to remain free from such claims on them. Like the philosopher who has escaped the cave, or the Nietzschean prophet who transcends the herd, Parks claims to "see through" our jejune desire for fabricated tales.

But what does this leave us with? In The Abolition of Man, C.S. Lewis argues that "you can't go on 'seeing through' things forever. The whole point of seeing through something is to see something through it. To 'see through' all things is the same as not to see." For Lewis, to see through things, and thereby see nothing in a transparent universe, is a logical absurdity. But for Parks, and others in his camp, the invisible and meaningless universe is the status quo. The only meaning, then, is that which we can project onto our otherwise meaningless surroundings.

In line with Lewis, I would argue that reading, at least good reading, is not the assertion of a resisting-self into a text, but a temporary denial of self in order to hear what another has to say. We must listen before we speak, or as David Richter might say, we must under-stand before we over-stand. Good reading requires humility and discernment to build the self, not simply an abrogation of the self or, as Parks claimed, to solidify a static self. As we read, the self is built as the post-Babylonian Temple with a trowel in one hand, and a sword in the other.

Beyond The Way Things Are

In Jeremy Courtney's Love Anyway, Alida Thomas finds stories of loving with resilience in the midst of war, disaster and betrayal, as well as important lessons of peace for a polarized world.

Dispensing in "Unsuperfluous Even Proportion"

Since, Comus goes on, "[b]eauty is nature's coin, [it] must not be hoarded / But must be current" (739-740), the wealth of the natural world is a wealth of resources and commodities which must be consumed Intriguingly, when the Lady and Comus enter into a battle of words, they rely upon two complete...