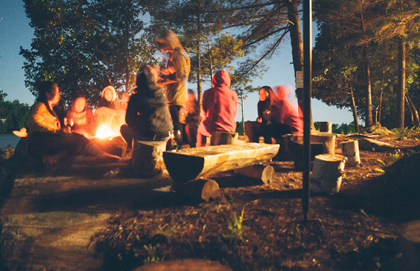 To say we’re living in an increasingly polarized world is a bit of an understatement.

There have always been pressures that run along the lines of our ideological differences, and multicultural countries often try to find ways of living together in spite of them, but tensions have been particularly on the rise over the past few years. The refugee crisis in Europe threw the EU project into doubt and, in great part, contributed to Brexit. The recent American election evoked dizzying responses from both liberal and conservative communities. And, just last month, the Charlottesville rally further entrenched the cultural left and right.

Which is exactly what happens when you perceive yourself under threat: entrenchment. There’s a desire to protect yourself and the things you care about, sometimes at the cost of engagement, nuance and dialogue. What happened in Charlottesville, and Berkeley after that, is a prime example: when people heard of swastikas marking around the Robert E. Lee statue, or when footage was shot of Antifa counter-protesters engaging in violent response, it was incredibly easy to want something done and done now.

Action is essential, and I don’t know if we’ll ever see an end of the quote “the only thing necessary for the triumph of evil is that good men do nothing.” The complicated bit, though, is resisting the urge to entrench ourselves into camps where, even with the best intentions, it’s all too easy for action to be informed by simplified, black-and-white narratives that overpower a convoluted and frighteningly nuanced history of causes, reactions and pendulum-swings. When groups become more isolated, and partisan readings of situations abound, even the act of having a conversation with someone who thinks differently can feel like a minefield.

Unfortunately, conflicts like those at the rally in Charlottesville are now part of our lives – but it doesn’t have to take dramatic showdowns involving fascism, free assembly, resistance and hate to reflect on how polarization affects our lives, and what a commitment to dialogue, even in the face of risk, could do to build a humane space for living together.

This isn’t the first or, unfortunately, the last time when our divisions make it harder to have a conversation with each other. Sean Banda, in a fantastic article over on Medium, writes how easy it is for people to build ‘echo chambers’ around themselves, which is a way of describing how we can surround ourselves with people who approach things like we do. It’s comfortable to stay in this kind of comfort zone, but it can snowball into an isolated bubble where it’s easy to forget we can be wrong about certain issues. It also might, as Banda says, encourage us to think the other side is dumb or not worth engaging with, which only leads to misunderstanding and talking over each other.

So what can we do about it? 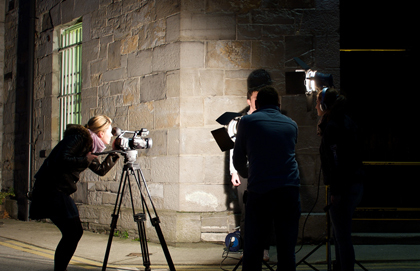 Reporting Faithfully
The Conversation: The Familial Intensity of Faith
The Sacramental Principle of G.K. Chesterton
Convivium means living together. We welcome your voice to the conversation. Do you know someone who would enjoy this article? Send it to them now. Do you have a response to something we've published? Let us know!

The first step might seem complicated but it’s open to everyone: try to get a clearer picture of what’s going on. Thankfully this can start with a simple question: why? Why might someone think differently than I do? Why might people be reacting so strongly to this? Are there factors that could be hard for me to see? And, because things don’t happen in a vacuum, asking about the history behind an issue is huge – often a single situation ends up being the result of a deceptively subtle chain of events.

Listening sounds easy but it’s really not, especially when we hear things that really grind against what we believe or hold true about the world. Deciding to hear someone out instead of starting an argument (or trying to make a convert) might even feel like betrayal or a moral failure. Attempting to make space for dialogue can also mean venturing deep outside your comfort zone. You could end up hearing things you never expected, even from close friends or family. You might not know how to react at first, and dealing with that’s part of the messy business of being together as we are, as compared to who we’d like each other to be.

At the beginning of the summer I started a group where we gathered once a week to discuss controversial topics – anyone could join and express what they thought or felt about borders, abortion, the military, feminism or whatever other theme we approached that day. People could debate ideas, but before that could happen we had to ensure a fundamental level of respect for each other. One day we tried an activity from Blanda’s article where we anonymously wrote down a controversial opinion we hold and put them in a hat. Responses ranged from the hilarious to the heavy:

I think that living in a village is better than in a city.

We shouldn’t try to understand each other’s opinions.

I think Futurama should be back on TV.

Nobody stopped being friends afterward, and we continued meeting for the rest of the summer.

Being ready to listen, and knowing that others are willing to do the same, puts us at ease and helps us put a face to ideas that might otherwise seem too threatening to touch. And that’s, really, one of the big things we can walk away with – every single idea has a person attached to it. It’s something many of us feel rather acutely: when we think our beliefs are coming under attack, it’s easy for us to feel attacked ourselves. Making space to speak and be heard isn’t just an interesting exercise – it’s an act of radical humanization. It’s a choice to look at the other and say, yes, you are like me even if we disagree. You are important even if I think you’re wrong. I will fight for you even as I fight the ideas you’re putting forward.

This doesn’t have to happen in discussion groups or official dialogue to count – we all have workplaces, communities, families. Everything that’s worth starting is worth starting small. This can be hard, especially as becoming an advocate for dialogue means opening yourself up to the chance that you’re the wrong one, and that takes more humility than we often like to swallow. Especially when engaging with people close to us. But this’s something that can unite us no matter if we identify as conservatives, progressives, people of faith, people of colour, patriots, seekers, resistors, skeptics – no one has a patent on the truth, and there’s always something more to learn. Even if it’s from someone whose ideas we find repulsive. Maybe especially so.