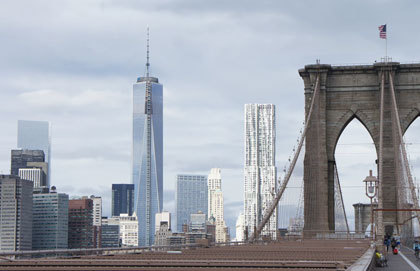 Tyndale University College in Toronto cancelled an appearance by President George W. Bush short weeks ago, around the time of the tenth anniversary of September 11. The sentiment of Tyndale supporters echoed the calls south of the border on that anniversary: words of criminality, war, and aggression; of misrepresentation, lies, and human rights scandals. Of grief turned into revenge, turned into imperial overstretch and collapse. And George W. Bush was its prophet.

But the intensity of American self flagellation caught me by surprise. As a Canadian, there is no shortage of smug anti-Americanism in my midst, but it was odd—maybe even disconcerting—to hear more and more Americans parroting these sentiments in a way that struck me as not only unfair, but also untrue.

Let's look at Afghanistan. The invasion of Afghanistan was an international, United Nations-sanctioned action in pursuit of a terrorist network which perpetrated the events of September 11. The government of Afghanistan utterly refused the legal workings of the international system, aligning the Taliban politically and ideologically with Al Qaeda. International response was swift, but not brutal. Another empire would have blasted that state from the face of the earth. Instead, America, with the U.N., which is to say nearly the entire world, toppled its government and busied themselves with roads, schools and educating girls. America and its allies are now routinely criticized for this idealist euphoria.

Budget Deficit, the Debt Ceiling, and the Fifth Horseman
The BRIC Shift: Decadence and Decline or "The Rise of the Rest"?
Watching the Watchers: Religious Freedom for Whom?

Take a second look at Iraq. 9/11 declinists usually demur on Afghanistan, but make a long point of the unprovoked aggression of the United States and its significantly thinner international alliance in Iraq. That coalition was thinner. But the claim that the invasion was unprovoked is untrue. Iraq began this conflict when it invaded Kuwait in the first Gulf War, covering its retreat with scorched earth and a badly failed strategy of international brinkmanship. That war never concluded with a peace treaty. It was concluded with a carefully negotiated armistice, around which clear conditions were outlined, such as the regular inspections by international bodies. These conditions were broken with regularity for nearly a decade before the United States acted. It was no unprovoked rush to war. It was a slow, nail-biting crawl to preserve some semblance of liberal world order.

Afghanistan and Iraq were neither primarily illegal or immoral, but imprudent. America could not afford, certainly not alone, these international adventures in global order. These were lessons carefully applied in Libya. America cannot afford to be on the wrong side of global opinion and act regardless.

Much of this was not clear in the decades prior to and the decade after 9/11, and mistakes were made. Serious errors in judgment marred American ideals of freedom and democracy, as it came under justified fire for violations of those very rights and freedoms which are intrinsic to its greatness.

Still, I hope the legacy of 9/11 will make for a more prudent America, but not a less zealous one. Its idealistic insistence on abstract things like human rights, democracy, economic and religious freedoms are some of its most important gifts—at home and abroad. The world needs the United States of America and its audacious idealism in times when realism and pragmatism seem infectious and overwhelming. The hubris of America's role in the world may rightly have worn off in the last decade, but so much the better. Now is the time to put to work those hard lessons with America's unwavering good intentions. That is the sort of legacy President Bush and 9/11 can put us in touch with, and that conversation, at least, should never be cancelled.