I just learned of this yesterday and have to write something about it. At the Bonne Terre Mine near St. Louis, there is a massive lead mine that has been abandoned since the 1960s. It's filled with a massive amount of natural water and has been the site of a commercial dive site for some years now. An enterprising couple who ran a dive shop 250 miles for a good open water dive site came across this unlikely source of diving inspiration that was a couple of hundred feet beneath them. 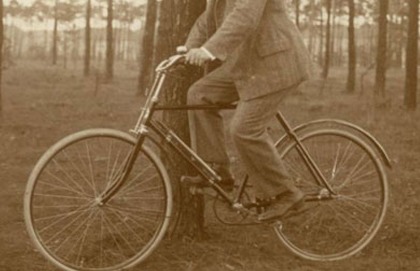 There are hundreds of tunnels, a two-square-mile underground lake and hammer drills still jut out of the rocks where they were left after the last shift clocked out. Take a look.

A 1989 People magazine article (an oft-quoted source for Cardus). YouTube video of a mine dive.

Time to add another item to a Cardus road trip. Braddock, then City Museum in St. Louis, then Bonne Terre Mine.

A couple of weeks ago Michelle bought me a bike for my birthday and a long-held plan to actually bike to work became a reality ...

Charity with Attitude - flames painted on the side and all that

Charitable work in Canada and the US is massively important along many lines—social, economic, cultural, religious, and nearly any other social or economic vector we care to pursue ...

We have some paintings on loan, I have a couple of odd sculptures, 3D glasses from Avatar, and things like that ...