Convivium: You're ready to announce the Mitchell Prize shortlist. Can you take us through the process of managing a literary contest of this significance?

Doug Sikkema: First, I was really happy with the number of entries we got in both poetry and short stories. There were 250 submissions And it was divided equally, 50-50, pretty much right down the middle. That was unexpected. We got about 70 percent of our submissions on the last day. We had someone  just taking all the pieces in, keeping them anonymous, recording all the names, and we had a pre-reading committee looking at the entries. We sent that on to our judges, who dealt with the top 60 in each category. And from there, they had to pick five for the shortlist, which included the winners and runners-up.

I've gone through the poetry entries, and they're just phenomenal. The judges took a very long time deliberating on what were the best, and had to come to an agreement that three would get honourable mentions, which was not a category we had even talked about. We’re announcing the finalists at our awards reception on October 30.

Convivium: Tell us about the poetry. We tend to think that poetry's this entirely secular activity that’s dominated by people from a particular side of the political spectrum. But it sounds like there are a lot of very literate people  who are able to write about faith from a poetic perspective.

Doug Sikkema: David Adams Richards noticed this sort of dynamic in the literary community in Canada years ago:  the one group you can sort of still be bigoted against or prejudiced against is people of faith, people who believe. He wrote about it in The Globe and Mail, and later in a book called God Is.

I'm curious to know if things have changed in the landscape, or if this prize is the catalyst for pulling out of people what has always existed. Maybe they hadn't found a voice or other outlets. But the judges were encouraged by just how profound the insights were from all of the poets. It's quite a range from beautiful, devotional meditations to, honestly, some very angry, passionate poems as well.  There are poems looking at what it is actually like to be from a religious minority in Canada today. They pull down the veil down from a lot of the things we tell ourselves about our tolerance, our diversity, our openness and inclusion. What does it actually look like to be a refugee in a city that is multicultural? It is a profound range.

Convivium: How does the Canadianness of both the poetry and the stories come through? Are there a lot of landscape poems, a lot of place-name poems, a lot of things that are attached to the geography of Canada? Or is it more the quality of Canadian existence?

Doug Sikkema: One of the hardest things for our judges to determine was the criteria. What distinguishes them as winners? The Canadian content, for some judges, pushed entries ahead of others that didn't have it. From what I've read of the shortlist, a large amount of it comes from landscape. There are some from the east coast, specifically, that look at what life is like working in communities in harsh environments. There are also things that we've come to expect, and know, as Canadian literature. But I would say that, predominantly, the Canadian-ness comes distinctly from what it looks like to be a person of faith in a community that ascribes, on the surface level, to what Canadians tell themselves, and then tries to explore that. Who's included by that contested, controversial term Canadians? Who's excluded by it? What are the big narratives we tell, especially in this sesquicentennial year when we pat ourselves on the back and say: "This is our identity." How do we explore that, and does it actually fit for everybody? Does it fit for the religious person? From what I've read, that's predominantly the Canadianness of the submissions.

Convivium: I'm curious how the story writers deal with that perpetual conundrum of writing fiction about faith that isn’t gusting at some point into a proselytizing or a moralizing parable that really isn't fiction? It's more "Here's what I think, but I'll invent a character named 'Fred' to make it seem more like fiction. How do they handle that tension? How do they get around it?

Doug Sikkema: There were stories like that. So, I don't think all of the fiction authors did get beyond that tension, as opposed to the poetry for whatever reason. I'd love to have further conversation with our judges about why. The poetry seemed to escape the kind of moralizing, proselytizing dynamic that can fit some Canadian writing. 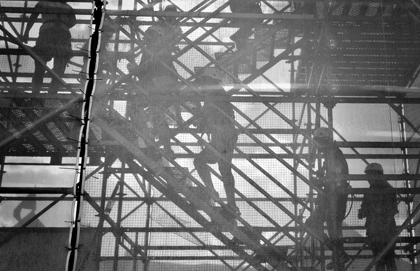 Some stories did, though, just assume the faith in some sense. You're reading the story about a sort of family trip from Ontario through Quebec, and interlaced throughout it are very real conversations about the father who's sort of Catholic French, but a little bit more secular. And there's an Ontario mother who's Protestant, and it's very real. Most Canadians know how that dynamic fits in. The very ordinariness of it makes it strange, in a sense. It's not that they're hiding or suppressing. It's just a real candid conversation.

A lot of the writers did tend to move toward memoir, very sort of subjective experience, maybe because of the way the prize is laid out. That does sort of pull away from the fictional dynamic. But there were some interesting ones that explored faith in a sci-fi landscape.

Doug Sikkema: Yes, authors used an alternative future to explore what would Canada look like in 150 years, and how can we use the sci-fi genre to explore questions of faith. There was some interesting, imaginative exercises.

Convivium: Were the stories pan-Canadian, from Newfoundland and Labrador to Tofino?

Doug Sikkema: Coast to coast, across the Prairies, and Ontario, too. One of the things we were concerned about was getting a lot of stuff from the GTA so that it became a GTA-centric prize. But the submissions were from all across Canada. Even in the shortlist, it's a really great diversity of east coast to west coast.

Convivium: I'm sure going through an exercise like this must lift your heart about the quality of the literature that's out there, and the reality that faith can be written about in Canada. There's no reason for faith not to have a literary place in Canada.

Doug Sikkema: Yes, absolutely. The submissions lifted my heart. They excited me that, hey, there are a lot of serious poets and short story writers who are writing from this perspective. It was encouraging to have some of the judges say that some of the poems were better than things they’d seen in very reputable poetry journals. The calibre was excellent. It was good verification of some of the assumptions that we had going into this. There are a lot of these writers out there. Maybe, they need a little nudge, a little catalyst. I think, from the submissions we received, this prize was that catalyst.

Convivium: Is there a need for a Canadian literary journal dedicated to faith-based writing?

Doug Sikkema: I don’t think we need a Canadian journal just for religious people just by religious people. In some sense, such journals already do exist and they do well with their visions and mandates. But we also need just reputable journals that celebrate aesthetic excellence, and (whose editors) realize that people with faith commitments are just as good at writing poems and stories as people whose beliefs are more “palatable” to the cultural elites. All the judges agreed that we should be submitting more than this shortlist to the (literary) journals in Canada. They should find a voice there.

Convivium: So, there's a message, then, not just to writers themselves, certainly not just to people of faith, but to the literary community in this country: Don't reject this just because it's about faith; it's quality writing, and you should be showcasing it as you do any other kind of writing.

Doug Sikkema: I hope so. One of the things we talked about with the prize is that we want it to be overheard. There isn’t much interest in this being a way to say, "Okay, let's all pat ourselves on the back, we're religious and this is our art." Rather, I hope we say, “Let's write things that are actually overheard by our secular neighbors in ways that capture their imagination, just as we should be reading them.” We wanted to explore how, in a secular age as Charles Taylor describes it, the person of faith experiences life. Is it in a ghetto? With insecurity? Boldness? Whatever the case, we can’t escape this “condition.” All of us are in these waters together.

A Note From the Editor: The Ross and Davis Mitchell Prize for Faith and Writing Shorlist has just been released. For your chance to read the submissions, click here.

To join us for this historic celebration of Canadian literature, purchase your ticket here today! Take hold of our special Early Bird offer to get your tickets for only $20.00 (regular $30.00) before October 2. Just use promo code MPEB!

Convivium's Publisher Peter Stockland reports on the inaugural Ross and Davis Mitchell Prize for Faith and Writing Reception and the presentation of $25,000 dollars in prize money to emerging voices in the Canadian literary sphere.