It seems a lifetime ago, not 10 days, that I wrote here about the wholesome joy of the Brier, Canada’s national curling championship, held this year in Kingston. The final finished less than 72 hours – in a packed mid-sized arena – before sports was finished altogether. The NBA, the NHL, Major League spring training, everything down to the local junior high school – all suspended due to the novel coronavirus, COVID-19.

And then this week, when every all-sports-all-the-time channel was running “classic” games from years gone by, there being nothing to cover, came official Big News. Tom Brady, the most successful quarterback in the history of football, left (arguably) the most successful team in the history of football. Next season he will play for the Tampa Bay Buccaneers, having concluded 20 seasons with the New England Patriots.

It would have normally merited uninterrupted coverage for days. But, as one sportswriter put it, the Brady story was taking place in a parallel universe. In our universe, the pandemic had cancelled sports.

Which is necessary, but remains a shame. Sports is play. Man, created in the image of God, needs both to work and to rest. Holy writ says nothing of God being at play, but He must be at some time, because creatures made in His image need to play. Even the angels dance on the head of a pin, and why would they do that if it wasn’t great fun?

At the very least, God must delight in our play. As the great Scottish sprinter – and Christian missionary in China – Eric Liddell said, “God made me fast. And when I run, I feel His pleasure.” The 1981 Academy Award winner for best picture, Chariots of Fire, tells his story. I might advise watching that during these home-bound days rather than another “classic” game.

Professional sports complicates this a bit. Play, for those engaged professionally in it, has become their work. Does this corrupt the play, to make it work? Maybe for some in practice, but not in principle. No more than the actor on stage or the singer on tour is less at play. Perhaps, like Liddell, they are the blessed ones, whose portion it is to play. And to play on behalf of those who don’t get to play.

Recall that first game at Yankee Stadium after 9/11? Or when the New Orleans Saints returned to the Superdome after a season washed away by Hurricane Katrina? Or when, in the first days of the first Gulf War in 1991, Whitney Houston sang the national anthem at the Super Bowl, teaching an entire nation that it is possible to cheer and cry at the same time? 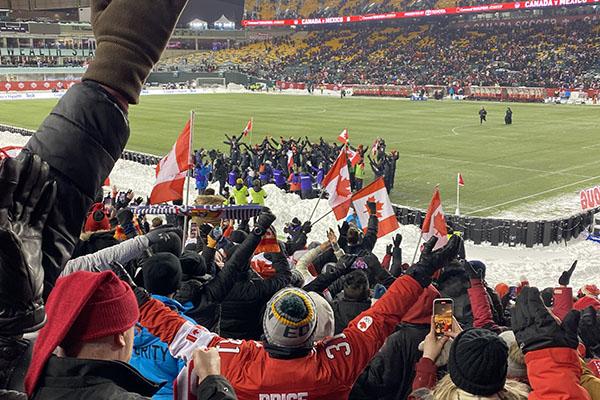 It’s not just for the crises. In that long decade of French-English tension from the October Crisis in 1970 to the referendum in 1980, every Saturday night Roger Doucet would sing O Canada at the Forum in Montreal, and les bleu-blanc-et-rouge would take to the ice and if Larry Robinson and Ken Dryden and Serge Savard and Guy Lafleur could all play for les Canadiens, coached by Scotty Bowman with Jean Beliveau in the executive suite, then Canada would be all right after all.

Play is not a commercial business, but it is serious business. And in serious times, we need play even more. That’s why those Italians confined to their apartment blocks step out on to their balconies at 6 p.m. to sing together.

Italy is rather too recent a national confection for the national anthem to resonate deeply, so the Italian Air Force took to the skies, billowing out their tricolore – verde, bianco, rosso – to a recording of Pavarotti’s Nessun Dorma. It’s better than a national anthem.

The news came out in strange fashion. No emotional press conference, like Peyton Manning had in 2012 when he left his career-long team, Indianapolis. Rather Brady put it out on social media.

The coronavirus protocols gave cover to what otherwise was a rather abrupt ending to an extraordinary record of accomplishment. But there could never have been a press conference, for such an event would have required the presence of Brady’s 20-year coach in New England, Bill Belichick.  Belichick is rude and surly at press conferences; his winning record gets him a pass on unbecoming behaviour toward the journalists and fans who make his profession possible.

Being rude and surly is not incompatible with being a great football coach; Belichick is the most successful ever, having been to 9 Super Bowls in two decades in New England, having won 8 of them – six as a head coach and two as a defensive coordinator. Just to be a head coach for 20 years with the same team is the rarest of achievements in the cutthroat world of the NFL.

Now Belichick and Brady will both get a chance to prove that they can win without each other; that alone may be sufficient to explain why the most successful partnership in pro sports has ended. My hope is that Brady now will be able to share more abundantly is what was always pinched in New England: the joy of the game.

A lifetime football coach I know well often tells his players – usually after some ferociously intense hard work – that football is a game and if they are not having fun, what’s the point? If there no joy in the play, alongside the work, the sweat and the pain, it has failed in its mission.

That’s why Belichick, the best ever at his role, failed in at least one respect. His coldness sucked something of the joy the games are meant to bring. One doesn’t have to be an effusive John Madden or Don Cherry, waxing emotional. Consider Scotty Bowman, one of the most successful major coaches in any sport, winning nine Stanley Cups with three teams over thirty years. Famously stone-faced even at moments of victory, Bowman did not suck the joy away from others. He remained always classy. Belichick was too often the dark lining draped around a silver cloud.

Play, as we are rediscovering in these days, is meant not only to be the silver lining to life’s dark clouds, but the sunshine that drives the dark clouds away. Brady is headed to the Sunshine State. He has more than earned it.

Putting Putting Ahead of Prayer

Convivium Editor-in-Chief Father Raymond de Souza reminds us that cathedrals are built not for mini-golf but for the greatness of God.

Huddle Up For Diversity

With the Canadian Football League busily promoting the goal of diversity, Father Raymond de Souza notes the distinct absence of height-challenged 140-pound players on the field.