Comment magazine has a weekly email that is pitched as "a wunderkammer" of discoveries, compiled by Comment and illuminated for our readers' edification and entertainment" but there are a few things missing to this point. According to wunderkammerist Gabriel Kaltemarckt (1587) there are categories of things you need to truly earn the title: sculptures and paintings; curious items from home or abroad; and antlers, horns, claws, feathers and other things belonging to strange and curious animals.

The problem is that we have some of those things here at the Cardus office but not nearly enough to qualify. This bothers me and I wonder if you, loyal reader, might send us some things to offset our embarassing deficit. We have some paintings on loan, I have a couple of odd sculptures, 3D glasses from Avatar, and things like that. Other colleagues have stuffed animals (I won't say who has what stuffed animal, in particular, though profile pictures do reveal possibilities) but really, we have a very thin start to the wunderkammer claim. Maybe you have some things to make the tangible world of our home at 185 Young a rich cabinet of curiosities. 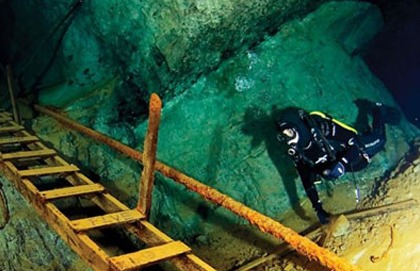 My favourite wunderkammer in Hamilton is Mr. Used, a sketchy, 70,000 square foot warehouse full of oddities that I never tire of wandering through. The place is famous for a nine-foot-tall fiberglass Roman soldier, a casket, Red Green Show set pieces, Harvey's soft ice-cream machines, a 10 foot rosetta window from a church, a stuffed baboon, booths from an old fast-food place and a whole lot in between. The back recesses of the second floor is unheated and poorly lit, which makes the randomly placed mannequins somewhat creepy—like you are walking into the set of I Am Legend. This is a great photo by Gregory White and gives some idea of what to expect.

I'm not out to compete with Mr. Used, but we do need to try and live into the title we've set for ourselves.

I look forward to your mail-in remedies.

Mapping the Republic of Letters has at its center a multidimensional data set which spans 300 years and nearly 100,000 letters ...

We are learning, however, that despite our great technological advances, we need sufficient density and diversity in our social networks for shared life to work well Social networks are impacted by geography but only when the network actually exists ...