This summer, Ontario Attorney General Yasir Naqvi is promising to hold public consultations about a proposed new law that would limit protest outside Ontario abortion clinics. The impetus for this is allegations of harassment outside the Bank Street abortion clinic in Ottawa. There have long been claims, albeit infrequent and almost entirely unsubstantiated, of harassment outside the clinic. Regardless of how individuals feel about abortion, the problem here is that a free society must not criminalize protest on public property, and certainly not without evidence. Freedom of speech and assembly is at stake for everyone.

To begin, there are two sides to this debate: For pro-choicers, the bodily and sexual autonomy of the woman who carries the fetus supersedes all other arguments, and equality demands safe access both to contraception and abortion. For pro-lifers, life is a continuum starting at conception, and killing a person because they are small, young or inside their mother’s womb is an injustice.

There has been a pro-life presence on Bank Street since the clinic opened. Forty Days for Life involves prayer across the street. Sidewalk counsellors talk to those who choose to talk to them. This has gone on without incident for years. If anyone has been harassed, it’s pro-lifers whose cameras have been stolen and signs torn.

True, we cannot rule out the allegations made by women visiting the clinic in May 2017. Surely,  though, the Government of Ontario should require more than hearsay, perception, or feelings before shutting down civil liberties. The evidence we currently have (or rather, lack thereof) would be given little weight in a court of law. Why set a low standard for justice? For starters, the clinic has cameras. Why not submit footage of pro-life harassment? 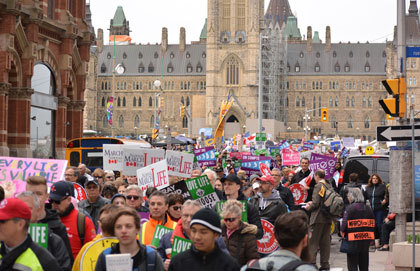 Were the clinic to make such footage public, it’s worth noting that pro-lifers would condemn any behaviour that is illegal or even merely disgraceful. The pro-life community opposes abortion because it sees the procedure as inherently dehumanizing to women and their children. The pro-life community does not support harassment of women who have had abortions as it is further dehumanizing.

Bubble zones on public property in front of abortion clinics set a bad precedent. What do they mean for other law abiding and peaceful protests? What about protesting a corporation violating good environmental practices, or an embassy infringing on human rights? Recently, Indigenous protestors erected a teepee on Parliament Hill. Significantly, they placed it where the power and action is, and were allowed to do so.

Ultimately, our society chooses to look the other way about causes we find uncomfortable, be it the conditions on First Nations’ reserves, food security in the North, homelessness, or the fact one in four pregnancies end in abortion, resulting in about 100,000 abortions annually.

Right now we are at risk of curtailing civil liberties without evidence.

Right now we are at risk of curtailing civil liberties without evidence. Bubble zones may only successfully move protests down the street with all the ramifications that brings for businesses there. Erecting a bubble zone limits constitutional freedoms of speech and assembly for all Ontarians: those who oppose abortion and those who do not. After all, it could be your cause that grows unpopular and bubbles up on government radar next.

After a week where she watched a film that takes viewers inside the U.S. abortion industry, then observed the annual March for Life on Parliament Hill, Convivium’s Rebecca Darwent says Canadians must be allowed to debate the “choice” being made.