Quebec’s anglophones, francophones, and allophones should, as one, be on their smart phones demanding to know what in the name of Saint René Lévesque just happened in the National Assembly.

“We are not a small people,” the late premier famously said after his victorious Parti Quebecois stunned everyone on election night in 1976. “We are something like a great people.”

Wherever he is now, Ti-Poil, as the scant-haired Lévesque was affectionately dubbed, must be madly shrugging his shoulders in embarrassment at provincial legislators voting to dissuade Quebecers from using the hybrid greeting “bonjour-hi” publicly.

The phrase is a good-natured and handy one, especially in Montreal, where both languages are used when one doesn’t know which language the other person speaks. It is customarily, though not exclusively, used in business to make interactions not just civil but convivial.

Given that, the only great thing in the attempt to quash mere civic politeness was the huge amount of offence it caused. How could it be seen as anything else when it has reduced Quebec, again, to an international political laughing stock?

Unfortunately, the sheer Pecksniffian triviality of the unanimously adopted “bonjour-hi” motion exacerbates the serious problems it represents, and that will continue to plague Quebec long after the current external mocking and internal mortification abate. Those problems can be grouped in two categories.

The first is the way language, almost 40 years after Bill 101 gave French-speaking Quebecers their majoritarian due, continues to be manipulated to foment tension and discord for shabby political gain. 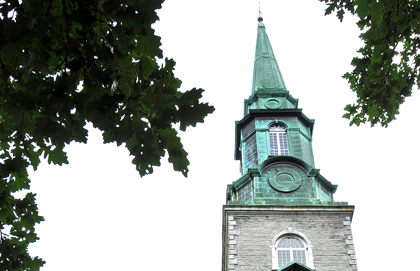 Letting God Take the Wheel
Immune to Embarrassment
Truth and Justin Trudeau
It’s one Quebecers of all linguistic stripes will continue to face unless they put aside smallness to truly become something like the great people of René Lévesque’s vision.

Both the governing Liberals and the opposition Parti Quebecois are addicted to inventing surreal linguistic conflicts that pit primarily French-speaking and English-speaking Quebecers against each other. Allophones, who have neither language as a mother tongue, are caught in the cross-fire. It is, frankly, a painful co-dependency that a great people should have overcome long ago.

Alas, the PQ needs periodically to indulge in rounds of bat-the-anglos to demonstrate how it remains Quebec’s sole staunch defender of French. It tends to do so by pandering to a vocal minority of kvetchers who insist French is not just Quebec’s majoritarian language, language of government transaction, and most common language, but rather its lone public language.

Given that there are approximately 128 languages spoken by students of the Montreal school system alone, the demand defies basic demography. The PQ’s declining fortunes show the effect of sacrificing reality to ideology. Still, the idea is frequently upheld with a fervor that would have made René Lévesque cringe.

PQ leader Jean-Francois Liseé confirmed the malignant cynicism underlying that fervor when he boasted on Thursday in the National Assembly that the whole “debate” was his idea of a way to “trap” Premier Philippe Couillard into choosing between francophones and anglophones.

Couillard and his Liberals, sadly, have only affirmed how much they, too, need the manufactured argy-bargy around language to continue vaunting as the voice of political reason. Their saving role, the premier essentially argued, is to sooth the pride of  “Canada’s best treated minority” – as if English-speaking citizens are some hybrid of hospital patient and rescue shelter pet.

The divide-and-conquer gambit couldn’t be more crass, yet some still fall for it. Like the family that shouts at the dinner table because shouting is the only way to be heard, Quebecers find themselves taking sides in language squabbles their better judgment says are irrelevant to life outside the political bubble.

Therein lies the second problem. Quebecers traditionally look to government to resolve problems other Canadians might see as entirely private matters. The trait is blamed on the mythical dominance of the Catholic Church. Then again, isn’t everything?

But the “bonjour-hi” debate offends democratic freedom itself precisely by using language to cross a boundary of State intrusion no citizen of Quebec should tolerate. It is not about the language one speaks. It is about one’s freedom to speak at all.  Most benignly, it interferes with Quebec’s basic social architecture – the normal relations between citizens – by politicizing natural common courtesy.  At its more toxic, it is State intrusion on the capacity of free citizens to speak privately to each other.

So, Quebecers can regard it as jumped up politicians barging in where they have no business. Or they can see it as the State testing the boundaries of soft tyranny. Neither is a great choice. It’s one Quebecers of all linguistic stripes will continue to face unless they put aside smallness to truly become something like the great people of René Lévesque’s vision.

In the 1990s, Bruce Myers was chasing political news stories as a member of the national press gallery in Ottawa. As of May, at age 43, he will be an Anglican bishop in Quebec, pastor of a small flock spread across hundreds of thousands of square kilometres. Myers tells Convivium Publisher Peter Stockland that, like a good reporter, he is confident he’ll be in the right place at the right time as Quebecers overcome their violent reaction to organized religion and let God into their lives again.