When young Kevin Donovan left Montreal’s Loyola High School 67 summers ago, he could hardly foresee having a son who would one day lead the school to a landmark legal victory for religious freedom.

Yet his graduation picture in Loyola’s Class of 1953 photo encapsulates the sense of familial history palpable in the storied Jesuit institution’s hallways and makes resonant the son’s adieu as president as July began.

“I know in October I’m going to be asking myself, ‘Oh my God, what have I done,’” Paul Donovan joked shortly after announcing his leave-taking from Loyola. “Going into Loyola and working with all these wonderful people has been life-giving.”

Paul Donovan, the recently retired president of Montreal’s Loyola High School, stands by the graduating class photo that contains his father Kevin, who was also a student at the storied Jesuit high school.

The giving has gone both ways. At 55, Donovan has brought to a close an engagement with Loyola that goes back 39 years. And that’s just on his own count. It doesn’t count the time when his father was part of the school’s 124-year-existence — or that his brother Sean continues to teach there, and one of his nephews is still a student.

It doesn’t include the time his brothers or, of course, his father, were part of the school’s student body.

“I spent five years as a student, six years as a volunteer coach, 28 years as a teacher and principal, and then the last five as president. Pretty much been here my whole life,” he says.

The highest public profile moment came in March 2015 when the Supreme Court of Canada ruled that the Quebec government had violated the freedoms of students at the school. By obliging Loyola — established in 1896 by the Jesuits — to accept a secular ethics and religion-as-sociology curriculum without any provision for its Catholic nature, the government failed in its duty to “foster religious diversity, not extinguish it,” as Madame Justice Rosalie Abella phrased it.

The decision ended a lengthy legal fight that saw Loyola initially win, some thought surprisingly, at the Superior Court level. It then lost in the Quebec Court of Appeal. But with the Supreme Court’s positive judgment in hand, it was able to compel the province to re-negotiate its approach to the so-called Ethics and Religious Culture program.

Guiding the battle as Loyola’s principal, which involved a good deal of shoring up those uncertain the outcome would be worth the cost, Donovan says the long-term benefit has been widespread recognition how important it is for people of faith to stand their ground. 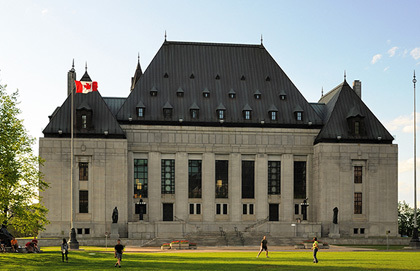 The Conversation: Law, Loyola and the Common Good
Beyond Academics
The Beam of Christian Schooling

“I’ve been getting a lot of messages from people who refer to it as a great sign of hope. I’m touched by how many were inspired when we said: ‘We’re not apologizing for our identity and, in fact, that identity is very much needed in our culture and our community.’”

"I’m touched by how many were inspired when we said: ‘We’re not apologizing for our identity and, in fact, that identity is very much needed in our culture and our community.’”

The walls of Loyola are festooned with photographs of the great and the good who’ve passed through its halls: former Canadian governor general Georges Vanier was a graduate, as was his son, L’Arche founder Jean (whose photo was removed following the revelations of sexual abuse). Former federal finance minister Jim Flaherty is prominent as are a number of entertainment stars and the renowned philosopher Bernard Lonergan, who served as a teacher.

Yet if someone were somehow able to make a word cloud of Donovan’s thoughts for a day, the noun “community” would undoubtedly dominate. Anna Farrow, executive director of Montreal’s English Speaking Catholic Council (ESCC), says his dedication to deepening Loyola’s presence as an active Catholic presence in Montreal will endure as his legacy perhaps even more than the Supreme Court win.

She knows. The four Farrow sons went one-by-one through Loyola over the course of a decade while Donovan was principal. He was also president of the ESCC when she was hired as executive director. He has been, she says, a stalwart for Montreal’s often precariously situated English community, especially its uneasy Catholic component.

“Under Paul, there were things put in place to really be intentional about being part of the English-speaking Catholic community, but also just the neighbourhood around the school. (Loyola) has been extremely conscientious about making sure the facilities themselves were available for use. There’s this constant invitation: ‘We’ve got this beautiful space. Use it.’”

The welcome mat at the door had its higher order analogue in a robust sponsorship program that sought to ensure students from all socioeconomic sectors could access Loyola’s Jesuit-based educational approach, Farrow says. While Quebec’s French-language legislation limits the available pool of those able to attend an English-language institution, Donovan’s time at the school has correlated with an assertive effort to reach into “communities” plural for the shaping of the student body.

Donovan’s time at the school has correlated with an assertive effort to reach into “communities” plural for the shaping of the student body.

“From the beginning to the end of our boys being there, a marker of the school was the high percentage of kids who were there on bursaries out of the belief this is an education that should be made available to as many as possible,” Farrow says.

Denburk Reid, Loyola’s director of community relations, got a pleasantly surprising insight into the depth of that belief when he met Donovan several years ago. Mutual friends had brought the two together for an exploratory “professional fit” conversation.

Reid’s resumé included founding Montreal Community Cares and five years as director of community relations for the Alouettes football club. But as a non-Catholic — “I’m from Jamaica; I read my Bible” — he knew little about Loyola and wasn’t really sure who Donovan was. That changed, radically, in their first conversation.

“The vibe was instant trust. The things said were things I believe in. They were really touching home. So, I was listening to see what kind of help they needed, and how I could give it to them. But at the end of the conversation, he looks at me and says: ‘How can we help you?’ It blew my mind. I thought I was there because he had a request. Without even knowing me, he comes out of the blue asking how Loyola can help me. That’s the spirit of the school, the atmosphere of the school, that Paul represents.”

Over the succeeding four years, Reid says, it’s represented itself as a determined plan to “build bridges” to diversify even further Loyola’s demographic while keeping it an unequivocally and publicly Catholic institution. The plan, he adds, not only contains its own success, but its successful succession. It will, he says, carry on despite Donovan’s departure because of the groundwork he laid.

Fr. Robert Brennan, who has been appointed interim president of the school, says that’s no surprise. He was coach of the Loyola football teams in the mid-1980s when Donovan, then on injury hiatus from the Concordia Stingers, volunteered as offensive co-ordinator. Brennan quickly discovered a young man already steeped in the Jesuit tradition of discernment.

“Paul always had a game plan whether as football coach or as a school administrator,” Brennan says. “He thought things out ahead of time: how he was going to get somewhere, and where he needed to go. It made him a good coach and a good teacher. In its evolution, it made him a charismatic leader.”

For his part, Donovan says the first step in his new plan is to wait and discern what God wants. When he was promoted to president from principal of Loyola five years ago, in the aftermath of the Supreme Court victory, he walked the Ignatian Camino in Spain as an exercise in leaving himself open to God’s will. COVID-19 makes that impractical this year, so he’ll spend the summer putting home renovations to the same purpose.

“I need time to see what path is laid out for me. My task isn’t to worry about it. It’s to trust what God has in store and make use of the freedom to discern it.”

Words that would make a father — and no doubt the Father Himself — very proud of his son.

Through the strengthening of their school community as well as the surprising growth of an extended community, Community Christian School in Drayton, Ontario looks beyond just the academic in their transition to remote schooling.