This blog was adapted from Peter Stockland's regular column in the Catholic Register.

In the final week before Christmas, I was in an Ottawa sandwich shop having coffee with two photographer friends when a man behind us pitched himself into our conversation.

One friend and I raised our eyebrows at the intrusion but the other friend turned to answer him. It took about 10 words to twig to the fact he was mentally ill and was surfing a wave none of the rest of us could catch. My friend, though, simply kept talking with him, or rather attending to what he was saying, nodding, affirming and, oh, what’s that word I always forget, oh, yeah, listening.

After a few moments, his momentum flagged and he went back to looking out the café window. We returned to our photographic chat. Nikon this. Canon that. Here a Leica. There an antique Speed Graphic. As we were gathering to leave, however, the intervener spoke again.

“I’m sorry I barged into your conversation,” he said. “That wasn’t very polite of me.”

“No worries,” my friend said, turning a smile on him. “It was nice talking to you.”

We went out. We went on. And it has taken me a week in the week before Christmas to see, myopic, self-absorbed Christian that I am, how what I was given the gift of being present to was the image of Christ in His suffering and in His charity. 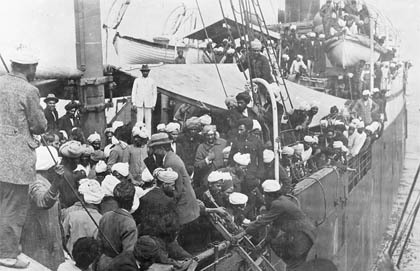 We are habituated to thinking of charity as something that requires the grand sweeping gesture, if not the 18-wheeler truck with flashing lights and a brass band following, signaling good works being, or about to be, done. And, oh, my, at this time of year, do we get to fix and fix again, for the high that comes with feeding that habit.

In a similar vein, we think of suffering as great gashes of public wounding and an onslaught of ambulances with sirens that sound as though they are screeching synonyms for tragedy. We qualify it as that which, if it did not exist, the media would have to invent to justify their Christmas spirit feel-good campaigns.

Yet here was Christ’s suffering being lived by one man sitting in a safe, well-lighted place while struggling with the most profound loneliness. Here was charity expressed as the small, immediate gift of a few hundred words and a human smile. Here was Christ in his most distressing disguise: the one I, in my self-absorbed myopic Christmas-Christianity, am all too often too distracted to even bother trying to see through.

For Christ is not indulging in decoding what the choir leader said to the soprano. Christ is not sniffing worthily at an erstwhile comrade-in-arms who has wandered over the hill and found himself on his knees in another denomination. Christ is not the squelcher in the debate with the pipsqueak atheist who denies our faith so furiously that he can’t stop talking about it.

It’s not that those things don’t matter. They do. They are a key part of the life of the Christian Church. They are part of our lives as Christians. They are natural consequences of us being human beings with busy minds and tongues that ache to wag.

But they are not Christ. Christ is the image of the face of a lonely, mentally ill man who desperately needs to talk to someone. Christ is what I lack when I do not, as my friend did so graciously, accept the gift of being present to the moment when I can remember to—what’s that word again? I’ve forgotten it already— oh, yeah, listen.

The key words, to me, are gift and moment.

We cannot, of course, as practical people, stop and talk to everyone every two minutes on the off-chance they might need an encouraging word. Our Lord said what we do the least, we do also to him; He did not say we’re forbidden to take time for ourselves to at least do what we must.

What truly matters, I am increasingly convinced, is not waking up Christmas morning to several acres of gifts under the tree, delightful and love-fostering as that moment is. What truly matters is being awake for the moment when the small necessary gift can be given without being an initiative, an intervention, without, in fact, feeling like anything out of the ordinary at all.

For here, surely, is the beautiful heart of our faith. A man and woman did that most ordinary of world-changing things: they had a baby. That baby became the Word that renewed the world in His charity and His suffering. We who have ears, let us listen to what Merry Christmas really means.

Most appealing to me (is) the concept of mercy and love, not only for those inside the religions but for those outside.