The flag is down at the Iranian Embassy in Ottawa. I know this because I work across the street.

It has been an interesting week, watching this drama unfold. Last Friday, I was copied on the press release from Minister Baird's office that Iranian Embassy staff were being expelled. "Canada's position on the regime in Iran is well known. Canada views the Government of Iran as the most significant threat to global peace and security in the world today." At the same time, Canada closed its embassy in Iran, citing fears for safety and security. Canada thereby cut diplomatic relations.

On Monday that embassy posted signs in Farsi indicating that they were closed due to "hostile action" by the Canadian government.

Groups came out supporting and denouncing Canada's unilateral action. The Raging Grannies protested the embassy closure on Monday. They are always up for a good protest. Meanwhile the Canadian Friends of a Diplomatic Iran held banners at the Lester B. Pearson Building in support of the move. In a subsequent press release, they basically said, "It's about time." They focused on Camps Asharaf and Liberty, and President Ahmadinejad's abysmal human rights record. The Canadian Friends also hinted that the Iranian Embassy in Canada threatened Iranian ex-pats in Canada. Having watched people in the embassy taking photos of protesters, this seems to me like a very real threat. There are about 120,000 people in Canada of Iranian origin.

Relations between Canada and Iran have been deteriorating over the last few years. The Governor General refused the credentials of several ambassadors sent by Iran, accusing them of terrorist links. 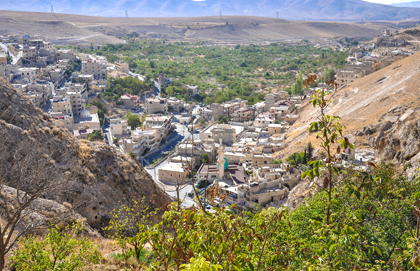 Being a Christian in the World Today
Democracy's Finest Hour?
Don't let the smallness confuse you

Immigration Minister Jason Kenney announced on Monday that immigration services had been removed from the embassy in Tehran months ago in anticipation of closing the embassy. This made it clear that this was not a sudden move but had been planned well in advance.

Minister Baird's press release gave plenty of cause for severing diplomatic ties: military assistance to the Assad regime, refusal to comply with UN resolutions pertaining to its nuclear program, threatening the existence of Israel, violations of human rights, and supporting terrorist groups.

The inclusion of Israel in the list of reasons prompted some to argue that Canada took this action at Israel's request. This was the position of an Iranian Foreign Ministry spokesman as well.

On Wednesday, the moving trucks were in front of the embassy. A few media types were around with cameras and TV cameras. The flag came down and the gates were locked permanently.

Now that US embassies are under attack in many Muslim countries, we may see more Canadian diplomats coming home. In hindsight, it looks like a pretty smart pre-emptive move.

All, of course, were very much on the mind of Ukraine's President Petro Poroshenko when he addressed the Parliament of Canada this week They did so not as a result of any kind of noblesse oblige on the part of tenderhearted Canadians already here, but because they accepted, very early, the necessity...

Don't let the smallness confuse you

Likewise, a foreign policy driven by national interest, and so-called shared Canadian values, also is a grand vision Foreign affairs is one portfolio this government will not (cannot) download, and has demonstrated, via the shuffling in of Minister Baird, a strong potential for defining a new Canadi...