It was the trip of a lifetime in a lifetime of crisscrossing the globe.

Part pilgrimage to explore my spiritual and cultural roots as a Syriac Orthodox Christian (Suriani), and partly a journalistic quest to deepen my understanding of  human lives devasted by war and terrorism, my latest international odyssey turned out to be a dizzying whirl of experiences that at once warmed and melted my heart, refreshed me spiritually, and shook me to the core of my being.

It took me on an incredible roller coaster ride from the highest peaks of joy and excitement at walking in the footsteps of my spiritual ancestors—and the deepest valleys of sorrows as I witnessed the plight of refugees fleeing yet another reign of terror under a newly resurgent terrorist group known to the world as ISIS.

The nearly 2000-year old Syriac Orthodox Church of India, in which I was raised, is an integral part of the ancient Syriac Christian denomination despite the geographic distance from its centres in the Middle East to Kerala, a province on the southwestern coast of India. It had long been my heart’s desire to explore the roots of my cultural and religious heritage in the Mardin province of southeastern Turkey.

Now, finally, it seemed as though all the stars were in perfect alignment to make that dream come true. An invitation to an international conference in nearby Beirut planted the seed of a plan in my head. The assurance of close Turkish friends (particularly one who was born in Mardin and has deep roots there) that all was quiet on Turkey’s southeastern front prompted me to take the step. It was a step I took, despite the dire warnings of government travel advisories explicitly telling travellers to go to Mardin at their own peril, because of its close proximity to the Iraqi and Syrian borders and the unpredictable security situation.

The flight from Istanbul to Mardin, capital of the province by the same name, took only a couple of hours. But it transported me to a world so poignantly evocative of the early days of my denomination that traces its origins to Antioch (now Antakya in Turkey), the city where the Apostles Peter and Paul introduced the Gospel to the citizenry, and followers of Jesus were first called Christians.

Mardin, named after the Syriac word for “fortress,” was an important point on the ancient silk route that led all the way from Mediterranean ports to Xian in China. This is where caravans laden with silks and spices traversed the Mesopotamian plain and reached the highland plateau of Anatolia (modern-day Turkey).

Syriac Christians formed about half its population until 1915 when most were forced to flee the genocide unleashed against them (as well as Armenians and Greeks) by Ottoman troops. Today, the relatively few remaining Christians live in harmony with Kurds, Arabs and other Muslims, despite the strangely anomalous attitude of the current Turkish government towards Christians, which alternates between suspicious and hostile to conciliatory on an ad hoc basis.

As my sister and I drive from the airport to the old part of the city, the blazing October sun throws the outlines of some of the world’s most ancient churches, monasteries and magnificent, ornately carved and decorated mansions (some now turned into hotels or museums) into sharp relief.

As I sample kebabs at the Yusuf Usta Kebab House (the best I’ve ever had) and sip Suriani coffee (doubled-roasted coffee spiced with cardamom, which is a Syriac specialty) at Café  Kultur overlooking the vast expanse of the Mesopotamian plain, I am reminded of the ancient spice trade that was instrumental in the spread of Christianity to the east of the Indian Ocean.

A spice trading ship brought St. Thomas the Apostle to the coast of Malabar (present day Kerala) in southwestern India where he evangelized between the years 52 and 72 AD and established the first Christian community there. The spice trade also brought Christian merchants from the Middle East to Kerala in the fourth century. They not only strengthened and reinvigorated the Christian community, but also gave us the Syriac liturgy that we, in common with all Syriac Orthodox congregations in the Middle East, use to this day.

Today, Kerala is home to seven million Syriacs, the largest concentration of members of this denomination in the world. The Christian population in the Middle East, on the other hand, has dwindled drastically due to ongoing persecution and genocide. Middle Eastern Syriacs are now scattered in diasporas around the world from Sweden and Germany to the United States, Australia, and Canada.

Holy Qurbana (Holy Mass) at the Forty Martyrs Church, a fourth-century church dedicated to the 40 Roman soldiers who converted to Christianity after the witnessing the crucifixion, is an awe-inspiring experience. After Mass, Archbishop Saliba Özmen warmly greets us. A longer chat with him is reserved for our visit to the Deyrulzaferan Monastery where he is the abbot.

A Kurdish friend drives us to the Deyrulzaferan Monastery, which is only a half-hour drive from Mardin. As we approach the monastery in the Tur Abdin (Holy Mountain) region of Turkey, the afternoon sun casts a glow on its magnificent cupolas and thick fortress-like ochre coloured walls, and turns the opaque green leaves of the surrounding olive groves into a translucent shade. 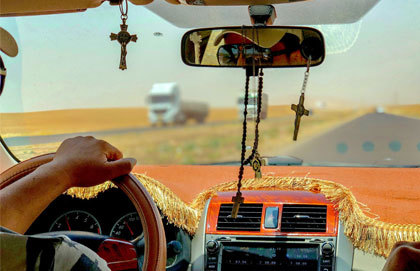 This monastery became the seat of the head of the church, the Patriarch of Antioch after the Ottoman leader Ataturk expelled him from Antioch in 1924. In 1959, the Patriarchate moved to Damascus, where the current Patriarch Ignatius Afram II resides. However, Deyrulzafaran remains an important centre of Syriac Orthodox Christianity, a fully functioning monastery and an important educational centre that trains monks and priests and teaches the Aramaic language.

Archbishop Saliba Özmen warmly welcomes us. Wearing the distinctive black robes and red sash of the Syriac Orthodox church, the erudite Oxford-trained head of the monastery enquires about the Syriac Church in India.

“We (Syriac Christians) were the majority in the Tur Abdin area, but now there are only 3,000 of us left. But as Christians we have to keep hoping for the preservation of our church and its homeland,” he says with a charming smile.

Unfortunately, “important” visitors from Ankara who summon him immediately cut our tête-a-tête short.

Trouble is brewing in Syria, and I wonder if the Archbishop is being warned to stay clear of the government’s Kurdish enemies.

A few days later, we leave Mardin for Midyat, another city that many Syriacs call home. From there we visit the Mor Gabriel Monastery, one of the largest and most beautiful Syriac monasteries that dot theTur Abdin region.

Here, as Syriac pilgrims, Gabriel Gares, a young man whose family has had long and important links with the monastery, welcomes us. His brother Yuhanon is the secretary to Archbishop Mor Theophilus Samuel Aktas. His father is a malfono (teacher) of the Syriac language to young students who have to go to Turkish schools where there is no instruction in their mother tongue.

The time I spend at Mor Gabriel is deeply meaningful. After a special guided tour, Gabriel introduces us to the Archbishop for a brief meeting. I ask about the state of the monastery in today’s political climate.

“We are still here,” the Archbishop says in a tone of stoic acceptance, tinged with the hope that tomorrow will be a better day.

Gabriel then leaves us in the hands of his mother Elizabeth who takes us to the nun’s quarters where we meet a joyful bunch of women ranging in age from 20s to 60s. We eat dinner together, and spend the rest of the evening drinking coffee, chatting, praying, and singing hymns. It is a special treat to hear the Syriac language—a sibling dialect to the Galilean Aramaic that Jesus spoke—used as a living language and not only as a liturgical one within the sanctuary of a church.

We stay overnight at the monastery—a special privilege reserved for Syriac pilgrims, and not for regular tourists. Tolling church bells at 5:30 the next morning remind us that Holy Qurbana is about to begin. We have been awake, dressed, and ready. Now we rush in the faint light of the dawning day to the monastery church, our heads covered lightly with scarves as is the custom in our church.

We leave the next morning after a long walk around the monastery’s extensive orchards, olive groves and vegetable gardens with Elizabeth, and breakfast with her and the nuns. As we say, “goodbye and God bless” to one another, I am moved to tears because this experience has been so very special, both at an emotional and spiritual level.

Back to Istanbul, then to Beirut on my own. The Turkish-Russian attack on northeastern Syria has begun as I reach Beirut. More bad news follows. About 200,000 people, mostly Christians, displaced by the latest conflict.

The day after my international conference in Beirut, I have an appointment with Nuri Kino, a Syriac friend and journalist colleague from Sweden, who founded and coordinates A Demand for Action (ADFA), an NGO with the dual purpose of advocating for Middle Eastern minorities, and providing hands-on relief to refugees in transit. Along with a Lebanese volunteer Gebran Kally, we drive through some horrendous ghettoes, visiting refugees, offering words of comfort, as well as healthcare and financial assistance.

With no work permits and little or no access to essential services, except what NGOs such as ADFA can provide, these refugees are in a difficult situation.

Listening to their stories—tales of loved ones brutally slaughtered, the yearning for lost homelands where they and their ancestors had lived for millennia, and the longing for a better life in a refugee-welcoming country such as Canada—is a heartbreaking and eye-opening experience.

It strengthens my resolve to continue advocating for them.

After this errand of mercy, Nuri introduces me to the Syriac Archbishop Theophilus George Saliba of Mount Lebanon.

Again, as a visitor from Canada of the Indian branch of the Syriac church, I receive a warm welcome, and a gift of the Lord’s Prayer in Aramaic inscribed on a scroll.

“Please ask the Canadian government to accept more Christian refugees,” pleads the Archbishop who is about to leave for Syria to check on his flock, many of whom are in a panic-stricken exodus from there.

Back in Canada, I repeat my plea—now more urgently than ever—to the people and government of Canada, and to all human rights-respecting governments in the world, first to send humanitarian aid to the refugees fleeing Syria and other volatile regions of the world,  not to corrupt governments but directly to bona fide humanitarian organizations. It is also imperative to put pressure on belligerent governments to restore the human rights of their minority populations.

My wish and prayer for the remaining Christians of the Tur Abdin area and for all refugees —who have had to abandon their beloved homelands— is best expressed in the vision of Canadian writer William Whitla:

Let streams of living justice flow down upon the earth.
Give freedom’s light to captives; let all the poor have worth.
The hungry’s hands are pleading; the workers claim their rights,
The mourners long for laughter, the blinded seek for sight.
Make liberty a beacon, strike down the iron power.
Abolish ancient vengeance. Proclaim your people’s hour.

The Fires This Time

With the annual Parliamentary Forum on Religious Freedom being held in Ottawa this evening, Convivium contributor Susan Korah reports on film-maker Jordan Allott’s documentation of Iraqi Christians “caught between two fires” and threatened with extinction while Canada looks the other way.

After attending a Diwali celebration for the first time, Rev. Cole Hartin examines how Christians might extend hospitality to those courageously visiting our congregations.