I asked myself this as I watched 9th Hour Theatre Company’s production of Godspell on a snowy evening in Ottawa last week. I know Godspell well, having sung and danced my way across Florida as a teenager with a performing arts group doing this very show. And I knew that somewhere on that stage should be a person playing the role of Jesus.

Godspell is a quirky Broadway musical based on the New Testament book of Matthew. It is not driven by a plot in the way we expect from musical theatre, but rather focuses on bringing to life the stories told by Jesus. The cast is simply an ensemble, with one person designated as John the Baptist and another as Jesus. Traditionally, the show opens with the ensemble in disarray until, one song in, Jesus brings them together and their journey begins. But as two songs went by, then three, I realized no Jesus figure was going to come bursting on stage.

Instead, the lines that would have been spoken by his character are read by the ensemble from a newspaper entitled “Good News Today.” As my initial confusion wore off, I found this choice created a different relationship between the actors and the authority of Jesus. The characters on stage were receiving the words of Christ the same way modern Christians do: by reading them and grappling with them.

9th Hour creatively renders Godspell relevant to a 2018 audience with such immediacy that the audience is compelled to confront their world with refreshed eyes. The script is full of gaps that allow directors and actors the creative freedom to fill the space with their own storytelling. Godspell is already a production focused on bringing the Gospel to life, but this show takes it further and juxtaposes the ancient with the current. Amidst the dialogue and skits portraying 2000-year-old parables, the show is punctuated with the latest headlines.

These headlines – mostly fictitious but all carrying the truths of our current events – speak to the issues that worry us today: North Korea, missing Indigenous women, the disparity between the rich and poor. They also speak of personal pain: a wheelchair user being failed by public transportation, an artist seeking fulfillment, a gay Christian discerning what it means to be a member of both communities.

Most frequently, the theme of encountering those who are different than us, or “the Other,” recurs through the headlines and the stories. 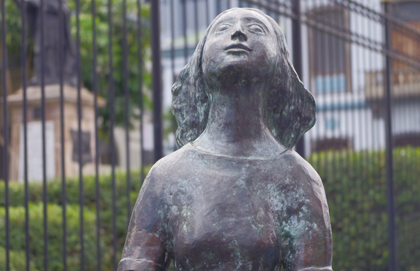 Universal Lessons From the Holocaust
Be Not Afraid: Prophecy in War-Time
A Story in Stone
9th Hour creatively renders Godspell relevant to a 2018 audience with such immediacy that the audience is compelled to confront their world with refreshed eyes.

The focus of this idea is embodied by the ensemble member who takes on the role of John the Baptist. He is dressed in rags, portrayed as homeless, likely subsisting off the modern equivalent of locusts and honey. He is visibly different than the others and initially remains removed from them. The rest of the ensemble are wary of him and ask each other if they can trust him. But slowly they invite him in.

This challenge to engage with the Other is as crucial today as it was when Jesus said “the poor you will always have with you, but you will not always have me” (Matt. 26:11).

The cast of the show, both on stage and off, resemble a true sample of the people of Ottawa. Among their ranks are policy analysts, a public servant, a speech therapist, a retired teacher, and students from primary to post-secondary. They split their time between engaging a world riddled with disheartening news and hard questions—and portraying on stage what is ultimately a story of hope.

Hope rings through the show. Not blind hope—a discerning hope. Hope that doesn’t flinch away from the Other. Hope that not just says, but does. Hope as “one pale thin ray reaching for the day” with the expectation that the light will prevail over the dark.

For Christians, this is the season of Lent, where we take on the liturgical posture of anticipation. In this in-between time, it seems like there are more questions than answers. Questions as we carry on waiting for Jesus to come back for the second time. In the meantime, what can be done here, in a world so broken? What can be done, in Ottawa, in 2018?

9th Hour’s production of Godspell faces those questions head-on. The show has given the 48-year-old Broadway hit a jolt of relevancy and a fresh twist that both challenges and encourages. This beautiful, fun-filled expression of the Gospel is accessible not just to Christians, or to the faithful, but to anyone who seeks hope.

But what about Jesus, you ask? Does Jesus ever appear in the flesh in this show?

Hope rings through the show. Not blind hope—a discerning hope.

I need not have worried. He shows up—but not the way I expected Him to. If you’re in Ottawa, I strongly encourage you catch this show’s last performance on Saturday and see for yourself. If not, I’ll tell you what someone pointed out to me at the intermission, before Jesus made himself known:

The homeless man wears a Superman shirt under his tattered jacket. I hadn’t noticed. Anyone who’s seen the 1973 Godspell movie knows this is a nod to a certain someone who wears the same shirt.

Truly I tell you, whatever you did for one of the least of these brothers and sisters of mine, you did for me. (Matt. 25:40)

Learn about the Ottawa Holocaust Survivors’ Testimonies Project, which features interviews of ten local survivors. The survivors’ experiences include ghettos in Hungary, Nazi slave labour camps in Germany and death camps in Poland, hiding in non-Jewish homes in Holland and France and in a dugout in Ukraine, and surviving as refugees in Romania and Shanghai. Each story is unique and offers a glimpse into what it must have been like to live through the traumatic events of the Holocaust.

A Story in Stone

Although the Notre-Dame cathedral in Paris burned on the first day of Holy Week, we have not lost as much of the sacred as we might think, writes Rachel DeBruyn.