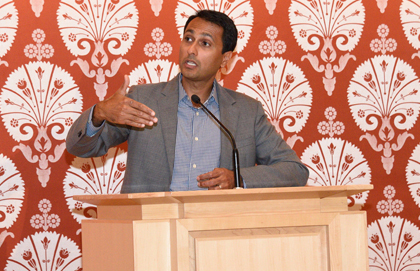 I remember the exact Ottawa street corner where I was standing as I listened to Krista Tippett’s 2008 Onbeing interview of Eboo Patel. Cars rushed by as I walked the too-warm streets of the city in summer and listened as a man I’d never met talk about getting on with the business of belonging to one another across faith traditions. “Religious people are changing our world. You can sit in a corner and whine about it. Or you can be on the bus and figure out how we can all work together to build a world, where people cooperate and live together in some sort of mutual loyalty,” he said.

Almost 10 years later, I sit down with Patel, author, Founder and President of Interfaith Youth Core, and former member of President Barack Obama’s inaugural Advisory Council on Faith-Based Neighborhood Partnerships. He’s also one of my key reasons for believing that a hopeful future built on trust, common good, and faithful presence is possible to learn. While weekend programming at the Ismaili Centre, Toronto whirled around us, we talked about what the last 10 years have taught him about hope, love, and building a common future.

Convivium: Krista Tippett called you “a young Muslim out to create an alternative.” You’ve been described as someone who “has tremendous odds against him”, as an innovator, a preacher of “tolerance.” How would you describe your vision and mission as undertaken through your organization Interfaith Youth Core?

Eboo Patel: That interview was done before I had kids, when I was recently married. Life looks a lot different when you have a 10-year-old and a seven-year-old. Work, however important, is contextualized in the breadth of life. I love my work, and I'm really grateful to do it. Yet I would probably describe it a little bit differently now than I would have 10 years ago.

Now what we are trying to do at Interfaith Youth Core (IFYC) is to help make interfaith cooperation a social norm largely in the United States. I love being in Canada because I love learning from other places and sharing stories. But, by and large, what we do is try to build a field of interfaith cooperation.

C: You told PBS that “the most beautiful verse of the holy Qu’ran, is “God made us different nations and tribes that we may come to know one another.” Why does this passage hold so much beauty for you.

It comes down to having a different longitudinal framework.

EP: IFYC used to be a much more international organization. Over the course of time, we asked ourselves the question, "What do we do well, and what do we really know?" And the truth is we don't really know diversity in countries outside of the United States.

I have a gut-level sense of religion in much of the United States, at least. Although I've traveled lots of places and lived in a handful of places, I could not say the same about religion in Kenya or South Africa or India. When you're dealing with something that's both as powerful and as flammable as religion, it’s best to do what you know, and do it humbly.

And so, we slowly and deliberately withdrew from our international programs and partnerships. We wound up giving money back to the State Department, which they informed us did not happen very often, at least not willingly.

What we do know well is U.S. college campuses. So we focus on what we do know, and we do it as well as we can, while being as humble as we can be in the process. We work with young people to build a norm of interfaith cooperation.

EP: Right now we work with an entire campus eco-system. We work with college presidents, faculty members, deans of students, and students. I see a fair amount of 19-year-olds, and I also see a fair amount of gray hairs. But it's an eco-system that's focused on young people. And it's an eco-system that's focused on how traditions can be relevant into the future for which young people are the principal carriers.

Why is it important to focus on young people? Firstly, there is so much energy there. There’s a great line by Gwendolyn Brooks. She writes as if she was a young person, "I shall create, if not a note, a whole, if not an overture, a desecration." I mean, that's so powerful. So many of my faith heroes started their work when they were young. The Aga Khan, the present Imam, was 20-years-old when he was appointed. Martin Luther King Jr. was 26 when he led the bus boycott. 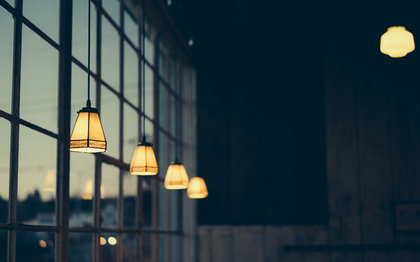 C: There is very much this thought in your interviews and writing that vibrancy within faith prompts one to action. How does this connection between belief and action provide an opportunity to create community?

EP: I would not particularly have connected it to faith during much of my adolescence. The tradition, it kind of played in the back of my head for sometime, but it wasn’t an active part of my life during my adolescence. The figure that brought me back to faith is Dorothy Day, who started the Catholic Worker. Her faith compelled her to radical action in a loving way. She didn't just serve poor people. She lived in solidarity with poor people, in community with them. In her view, that’s how Jesus lived, so it’s how we should live. She did it for almost half a century. And commitment always inspires me.

She started the Catholic Worker in 1933 when she was 33 years old. She died at a Catholic Worker house on the lower East Side in 1980. That's unbelievable. Everything I've read about her, she wasn't particularly impressed with herself. She was like, "This is how Jesus lived. This is how we should live."

Basically, I'd become involved in the Catholic Worker movement when I was 19 or 20-years old. I discovered that there is this impetus to social action across religious traditions. I discovered it, finally, in my own religious tradition in the form of my grandmother. I think we all have what I call an adolescent discrimination against the familiar. Something that your parents did can never be cool. Ask my 10-year old about that, right?

C: It also seems that perhaps the youth at IFYC are redefining the term radical action in a more positive sense. Is that true?

EP: I think the answer to that is ‘yes’ if radical means to the root. The way Dorothy Day lived was so strikingly different. To choose poverty. To choose intentional, and intimate, and intensive community. That's radically different. To protest in a loving way. To build an alternative. She talks about it as a way to create a society where it is easier for people to be good. One of the things I like to ask now is how we create spaces where it is easier for people to cooperate.

C: You also served as a member of President Barack Obama’s inaugural Advisory Council on Faith-Based Neighborhood Partnerships. What is the role of neighborhood in enlarging the capacity to belong to one another? To engage in these conversations?

EP: It begins in the places we live. I don't think I realized the importance of neighborhood nearly as much until I became a dad and became involved in things like Little League Baseball. I speak of the United States, which is my principle experience. I imagine there are similarities in Canada. But there are these huge efforts that people make to build civic institutions in their area for the benefit of their kids, for sure, but also the perfume gets on lots of other kids.

For me, coaching or starting a sports league is a great example. I mean, this is hours and hours and hours a week that people are spending on something that is hyper-local, that is located in these 12-square blocks. I never thought that I'd be this guy. But I'm the guy who is assistant coaching (his son) Zayd's teams. I'm picking up other players on the way, and I'm loving it. There's something to the reality that we are connected to each other because we live three or four blocks away. It's a random connection because if somebody else moved into that house, we'd be connected, too.

We belong to each other because we're local like this.

C: You contribute regularly to the Washington Post, USA Today, Huffington Post, NPR and CNN. You have also written several books, most recently, Interfaith Leadership: A Primer. Clearly words and communication are important to you. You often use the phrase “change the conversation” when speaking about the work of IFYC and the work of interfaith community building more generally. What do you mean by that?

The Koran talks about arguing with people in the best of ways. The manner in which we speak of one another really, really, really matters. I do my best to not cast aspersions, even mentally.

How do you think the best of people with whom you disagree? It’s really hard. I think that's one of the things the prophets said. Rasul Allah who Muslims call the Messenger of God, had this in spades. He would speak to people in the most beautiful ways.

C: The work of multi-faith community building is slow, relationship by relationship, conversation by conversation, in today’ socio-political reality, from where do you draw your hope?

EP: I draw hope from long-term stuff. Listen. I’m going to tell you a story and I hope my son is listening too.

They are all completing same activity, but each has a different vision. It comes down to having a different longitudinal framework.

I’m meeting with 17-year-olds all the time. I can say, "I am running a workshop." Or I could think to myself, "I am advancing civilization. I am a conductor of civilization." This is what a civilization does. A civilization forms 17-year-olds. It nurtures within them existing traditions and prepares them to innovate and extend those. It's super hard and painstaking and slow. And you don't see the fruits of it 99 per cent of the time. But how else do civilizations advance and extend?