Montreal seems to be physically falling apart. To leave for a week's vacation is to return to a time-lapse implosion video.

Summer road repair is always a major snafu, of course, as it is for urbanites everywhere. Here we have the added quirk of crews taking a mandated "construction" holiday just as they've got everything torn apart. For two weeks every July, the city resembles the playroom of attention disordered children with an infinite supply of Lego blocks.

This year, however, the open question is whether anyone will actually be able to put what was once Canada's most beautiful metropolis back together again. It is not just a case of compounding inconvenience for commuters. There is a feeling that the underlying structures, the very beams and cement holding Montreal in place, are on the verge of falling into the St. Lawrence.

My wife and I were in Quebec City, on our way home from a glorious week in rural New Brunswick, when we got word that the Ville Marie tunnel had been shut down Sunday because of falling concrete. The tunnel is the major east-west connector on the expressway that runs across the southern edge of the island of Montreal. Vibrations from drilling to repair an earlier problem had reportedly shaken loose blocks at the entrance. 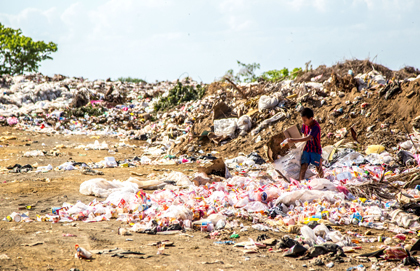 Justice For The Global Poor
Democracy's Finest Hour?
Sim City and its Discontents

The disruption didn't immediately affect us. We get home by using the Champlain Bridge rather than the Ville Marie. But the Champlain itself, which links the island and the Montreal's south shore, has experienced interminable closures for major repair work arising from official reports that the span is fundamentally unsafe.

There has been a gallows-humour rumour that the Catholic archdiocese put up a billboard at an approach to the Champlain with the message "Say Your Prayers" on it. A local TV station did feature a civil engineer from McGill crossing the bridge while alternately pointing out danger zones and murmuring Hindu prayers.

Mere kilometres upstream, the Mercier Bridge is apparently in even worse shape. Three years of incessant repair work appear to have produced little more than a particularly alarming incident in which a chunk of concrete and asphalt plunged into the river below, leaving a gaping hole in the roadbed.

What is most astonishing of all is the complete lack of accountability for this mounting accumulation of collapsing passageways. No one, from everything I have been able to gather, is responsible in any way. No one has stepped forward, as far as I know, to say: "This is why your city is falling apart."

Such neglect is troubling well beyond the "heads should roll" level of administrative consequence. Contemporary cities are manifold things but they are fundamentally acts of faith. To be an urbanite is to get up every morning with the central conviction that the concrete essentials of daily life have been attended to by those who are worthy of our trust. The sine qua non of self-reliance in a rural or wilderness setting is primitivism in the context of a city's created order that is, by design, congregational.

It is correlational that Montreal's physical decline tracks Quebec's generational lurch away from its foundational faith and its traditional sources of social cohesion. Whether there is actual causality in Quebecers' fervent adoption of the poor substitutes of sovereigntist abstraction and what William Gairdner calls "libertarian socialism" is a bridge someone, somewhere might wish to cross.